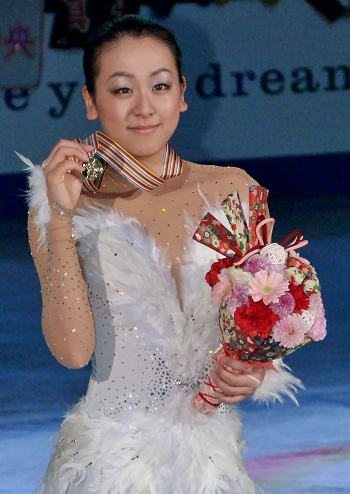 Japan’s Mao Asada is truly back. The two-time World Champion spearheaded a Japanese podium sweep in the Ladies event at the 2013 ISU Four Continents Championships Sunday in Osaka, Japan, and set herself up as one of the top contenders for Worlds.

The only other Japanese sweep at Four Continents dates back to 2003 when Fumie Suguri, Shizuka Arakawa and Yukari Nakano won.

Asada did not hold back in her program to Swan Lake by Peter Tchaikovsky. She attacked the program, which featured a triple Axel, triple flip-triple loop and double Axel-triple toeloop combination.

Yes, the jumps weren’t perfect yet as she two-footed and underrotated the Axel and also underrotated the triple-triple and the Axel-toe, but she went for them nevertheless. The 22-year-old landed four clean triples and only doubled the Salchow.

“For the first time since the Olympic Games I went over 200 points, so I feel that I am coming back to my performance level,” said Asada. “Today’s performance was about in-line with my practice, so I need to practice more to exceed today’s level.”

“I was happy that I was able to challenge my triple Axel and triple-triple combo,” she added. “Moreover, the outcome of both jumps was great as well. For the World Championship, I would like to brush up the quality of those jumps, so I want to continue my practice.”

Performing to O from Cirque du Soleil and skating last, Suzuki landed a triple flip-double toe-double loop combination, triple Lutz and flip, triple loop-double toe, as well as a triple Salchow and another triple loop. She only popped her Axel and didn’t do the planned double Axel-triple toe combo. Some landings were tight, but she held on to them.

The program, choreographed by Pasquale Camerlengo, is a little masterpiece, and creates a great connection with the crowd. Suzuki scored 124.43 (60.10/64.33) points which added up to 190.08 points overall.

“Overall it was ok, it was good, because in the competition just before that (a national event) I did very badly,” said the 27-year-old. “My aim was to redeem myself in this competition.”

“I talked to my coach a lot about how to become stronger mentally before the competition,” the World bronze medalist told the press. “In 2010, I obtained my first silver medal at Four Continent, which was just before Vancouver Olympics, and I had never participated in World Championships.”

“So I just tried my best without knowing anything and successfully achieved the second place,” she added. ” Compared to that, I know that my current situation is different and I have gone through some tough times, but with this competition, I was able to overcome it to a certain extent. I skated from the bottom of my heart.”

Murakami turned in a solid performance to a Tango medley that featured a triple Lutz (with an edge call), triple loop-double toe, three other triples jumps and strong spins. On the negative side, the 18-year-old underrotated a triple flip and triple loop and singled her Axel. She earned 116.99 points, a season’s best, and remained in third with 181.03 points overall. This bronze is her first ISU senior Championships medal.

“I participated in Four Continents last year, and my good short program put me into third place,” said the Japanese silver medalist. “However, I could not perform well in the free program and missed the podium. For this year, I was also placed in the third after short program yesterday, which reminded me of my free program from last year. Yet, I was able to perform good free program this time, and I am very glad that all three Japanese skaters are on podium today.”

“The jumps were okay, however my skating was not powerful enough,” she added. “I only focused on my jumps so that is the reason I could not care about the skating. I definitely got my confidence after my short program in this competition, but my task is to skate more powerfully in both short and free program. That is what I want to do at Worlds.”

USA’s Christina Gao lost her chance for a medal when she fell on her triple Lutz and came in fifth in the long with 113.94 points. The rest of her Libertango routine was well done and included five triples and three level-three spins. She finished fourth overall with 176.28 points.

“I’m disappointed that I missed the Lutz, because I almost never miss my Lutz,” said the 18-year-old. “I’m glad I pulled it together and still did everything afterward. It was a weird fall and if I landed it, maybe I would have had a higher placement.”

“I’m really happy with my short, but my long was definitely not my best,” noted Gao.

She already set her eyes on the future: “My posture and the way I present on the ice, my overall presence, can be improved a lot. I want to make everything strong and much better so that when I skate, I can be the best, and even if I mess up a little bit, I’m still near the top.”

China’s Zijun Li gave a nice performance to Sleeping Beauty and completed a triple flip-triple toe, double Axel-triple toe, and three more triples to pull up from tenth to fifth at 170.42 points.

“I am very satisfied with my free program today,” said the the 16-year-old. “Yesterday’s short program was not that great as I was not able to perform like in my practice, but I performed my best in my free program, so overall I am fairly happy. I would like to have good performances on both short and free programs at Worlds, because I didn’t do that yet this season. I want to improve the quality of my jumps as well.”

Li struggled in the morning practice, but didn’t take that to the competition.

“Maybe morning practice was too early for me and I was not fully awake,” she said, smiling.

USA’s Gracie Gold looked more solid in practice than in the free skate. She wobbled on the opening triple Lutz and didn’t add the planned triple toe. She later fell on a triple loop (underrotated), popped her second Lutz, and stepped out of a triple flip. The highlight of the program to La Vita e Bella was a double Axel-triple toe combo. The American dropped from fifth to sixth (166.66 points).

“It wasn’t a very good performance,” observed the 17-year-old. “I have a lot of time to prepare for worlds and think I will give a much better performance at worlds. I was nervous for my skate and was shaky on my practices. I wasn’t at the top of my game.”

“I’m going to go home and take it easy for about a week to recover mentally and physically before I start my training for worlds. I want to be in the top 10, but mostly it will be great experience for me,” she added.

“I think it was a great experience here and I learned a lot from this competition,” said the 17-year-old. “There were a couple of mistakes, but I am satisfied overall. I think I am more ready now for the worlds. What is really special for me is my choreography. We have done it so much in detail, it is definitely my favorite part of the competition.”

USA’s Agnes Zawadzki struggled with some jumps as well to place eighth (158.99 points). She opened her program with a good triple Lutz and a triple toe-double toe, but lost energy in the second half, falling on a triple Salchow, doubling the second Lutz and singling an Axel.

“I’m not happy with the way it turned out, especially the last section,” said the U.S. bronze medalist. “I’m disappointed, but I tried to fight through it. I have a lot to work on for next season.”

“My free skate was not perfect. I was sick and I was not able to concentrate fully,” explained the 24-year-old. “I am very disappointed with my first jump. I am usually able to turn my triple flip-double toeloop combo in, so doing the double was not planned for sure.”

Kexin Zhang of China dropped to 10th after missing a spin and underrotating a few jumps (148.34 points).

“My left leg somehow got stuck,” explained the 17-year-old. “It also affected some jumps afterwards and they were underrotated. I have been training this program only for two or three weeks. I don’t have enough practice with it and I am not yet confident enough with it. I did not have enough power for the second half of the program.”

“I was seventh in last year’s Worlds, but this year I will be happy if I just can show what I can do in practice,” she added.