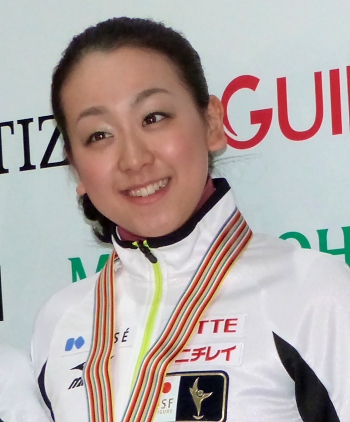 Mao Asada led the Japanese ladies to a sweep in the Short Program at the 2013 ISU Four Continents Championships in Osaka, Japan, on Saturday. Teammates Akiko Suzuki and Kanako Murakami, placed second and third respectively and all three skaters delivered excellent performances.

For the first time in two years, Asada landed a clean triple Axel in competition, and once she had that one under her belt, she really sparkled in her program to I’ve Got Rhythm. The Olympic silver medalist reeled off a triple flip-double loop combination, a triple loop and picked up a level four for two spins and the straight line footwork. With her season’s best of 74.49 (40.63/33.86) points, she came close to her personal best.

“This is the first time I landed my triple Axel in my short program this season,” said the 2010 Olympic silver medalist. “I was in good condition since I came here. The moment I jumped, I was 99 percent sure I was going to land it (the triple Axel). My condition has been going up since Nationals. It is exactly one year till the Sochi Olympic Games, and I would like to skate my best there.”

“I would like to bring this confidence into my free skate tomorrow,” the 22-year-old commented. “Today in my short program I was able to give my best with my current ability. I have been saying that this year that I will include the triple Axel in my competition program, and I succeeded today so I am very happy. This was the best short program of the season and all I could give right now. Today in the short program I did a very good job with my jumps and also my presentation was very good.”

Suzuki put out a dynamic program to Kill Bill and Once Upon a Time in Mexico that featured a triple toe-triple toe, a triple flip and double Axel as well as two level-four spins. The reigning World bronze medalist achieved a new season’s best with 65.65 (34.71/30.94) points.

“I was able to feel like “I finally made it,”” said the 27-year-old. “I have been struggling with jumps this season, and I had a tough time making my best towards the competitions. I didn’t have 100 percent confidence in the triple-triple, but my coach and I went through practices to make me strong mentally.”

While she was happy with her jumps, she wasn’t as pleased with the quality of her flying camel spin.

“My flying camel spin was one of the mistakes I can think of,” said the skater who trains in Nagoya. “As soon as I got off the ice my coach told me maybe it was your camel. I do think I can improve on my spins and also my step was a level three so there is much I can improve.”

Murakami struggled all season with her short program, but at Four Continents she put it finally together. The lyrical performance to Prayer for Taylor by Michael W. Smith was highlighted by a double Axel, triple toe-triple toe and triple flip. Both the combo and the flip were in the second half of the program. The 2010 World Junior Champion earned 64.04 (34.77/29.27) points, which was a new season’s best.

“I did of course concentrate in practice on my jumps because in all short programs that I have performed in this season, I did not have a successful triple-triple and flip,” said the 18-year-old. “Today, starting my program, I was a bit nervous, but I was able to calm myself and concentrate my energy.”

“It was the first time for this season without mistakes in the program, so that made me very happy, but there are still many things I can improve like the flip because it is still not stable,” she added. “I hope to make it a clean flip. Regarding my step sequence I would like to be able to move my upper body more.”

USA’s Christina Gao turned in a clean short to Close Without Touching as well, hitting a triple toe-triple toe, triple flip and double Axel to come in fourth with 62.34 points.

“I trained hard this whole season so I hope that in this competition I can go out and show how I have been training this season,” said the 18-year-old. “It’s only been a week since nationals, but I think I kept my momentum going.”

“Nationals was ok, but I made a really silly mistake so I worked on that spin, and I didn’t mess it up here which was good,” she offered. “I was more focused and on my feet today.”

Gao also explained that she will take a break from her studies in order to focus on skating during the Olympic season.

“The fall semester was hard,” she admitted. “I was tired a lot, but it was a whole new experience for me so I enjoyed it. I’ve actually decided to take a ‘gap’ year starting this spring. I will take one year off from school and I will start again next year so I can train for the coming season. I feel like if I commit to my training and stick with (coaches) Peter and Mark, I can get far.”

USA’s Gracie Gold opened her program to “Hernando’s Hideaway” with a triple flip-triple toe, but received an edge call on the flip and the toe was a bit tight. She also touched down on the triple Lutz, but landed the double Axel and her spins garnered a level four. Overall it was a little shaky, and she picked up 60.36 points and is ranked fifth.

“It was an OK program, it wasn’t my best,” noted the US silver medalist. “I stood up on everything and I skated clean, so for that I was happy. I did all of my elements, but I didn’t do them the best that I could, but I am happy with my score. So far so good.”

“This Four Continents is about experience,” the 17-year-old commented. “I haven’t had very many international competitions. To compete with world medalists, to even be in the same warm up with skaters like Mao Asada is amazing.”

Gold is confident heading into the free skating.

“After my second Grand Prix, we changed the jumps around so the program is more comfortable for me,” she said. “I think this really works for me as nationals showed.”

China’s Kexin Zhang hasn’t competed internationally this season, but continued where she left off last year with a solid performance to Nocturne in C Minor by Frederic Chopin. The 17-year-old produced a triple toe-triple toe, triple Lutz, double Axel and three level-four spins to earn 57.56 points.

“I think it was a pretty good performance and I am very pleased with it,” she said. “I had injury problems with my knees and my foot. I’ve been back to full training for about a month now.”

“Since I didn’t have many competitions this season, it is just my goal to skate as well as I could in the long program and to get experience,” Zhang summed up. “I’m going to Worlds and want to use this event as a preparation.”

Skating to Sex and the City, USA’s Agnes Zawadzki wobbled on her opening triple Lutz, recovered to land a triple toe-triple toe, but then fell on the double Axel. The U.S. bronze medalist was able to salvage points with her level-four spins, and placed seventh with 57.45 points.

“I fell on the Axel, which I also did at nationals,” noted the 18-year-old. “The Axel was off in the warm up. It’s not something you want to be thinking about going into your program.”

However, the skater is starting to feel a lot more comfortable with the triple-triple.

“That was something I was lacking early in the season with the toe-toe, now it’s just the double Axel,” Zawadzki sighed. “I’m looking to improve on my placement from last year (at Four Continents), but mostly it’s about improving and putting out two strong programs. I have to do that tomorrow and trust my training to do everything.”

Canadian Champion Kaetlyn Osmond was touted as one of the medal contenders following her success earlier this season with wins at Nebelhorn Trophy and Skate Canada. The triple toe-triple toe in her upbeat Latin routine was ok, but the 17-year-old went down on the triple flip. She came back to land the double Axel, but the layback was just a level two. With 56.22 points, she placed 8th.

“I am happy with my performance. I made a mistake so I was expecting this score,” said the skater from Edmonton. “This year I have been more confident at everything I have done. Just to go out there and skate for the fun of it and not aim for anything too high has been good for me this year. I am just hoping to go out there and have fun and to learn from this experience. I am just hoping to improve on what I have done this season, and I am going to be happy with whatever I do tomorrow.”

Teammate Amélie Lacoste started well into her program to Passion by Peter Gabriel with a double Axel and a triple flip-double loop, but she missed the triple loop, her favorite jump. The 2012 Canadian Champion finished 9th with 54.74 points.

“I was a little disappointed with my short program because I missed my easiest jump (triple loop),” said the 24-year-old, “but, I did my combo, which I am pretty happy with. I kept my focus until the end to get all my points.”

“I will put my short program aside and focus on long program tomorrow,” added the skater from Quebec. “It would be great to make the top five, but I just want to enjoy myself and the competition.”

Zijun Li of China did a triple toe-double toe instead of her planned triple-triple, and the landing on the triple flip was somewhat tight, but she completed a nice double Axel and beautiful spins. The 16-year-old came in 10th at 54.51 points.

“I was not able to perform my best,” she said. “I might have been a little nervous today. This is my first major senior ISU competition, so I hope to obtain the highest score. My biggest focus (in the free skating) is on landing all my jumps and on skating well in-between the jumps.”