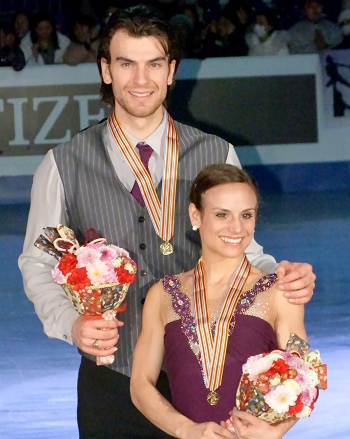 For the first time since 2006, China did not win the title (USA’s Rena Inoue and John Baldwin won in 2006). There were only seven teams representing three countries – Canada, the USA and China – competing as only few of the non-European member federations have pairs.

For Duhamel and Radford it was the first ever international title, but it didn’t quite go as they had hoped.

The Canadians looked tense and had to fight for each element. The opening triple twist was fine, but Duhamel touched down on the side by side triple Lutz, while Radford stepped out. Duhamel also did a wobbly triple Salchow-single toe-double toe combo and throw triple Lutz. The throw triple loop and the lifts were good, but the program looked like a hard piece of work, and by far, not as smooth as their short program.

“Obviously we are not happy at all with the way we performed today,” shared Duhamel. “It was the worst free program we skated all season. But we came here with our goal to win the gold medal and we are happy to achieve this.”

“It was a difficult and a struggle of a long program, especially compared to the short program,” agreed Radford. “We know we need to do more in order to get a better score, and to reach our own potential.

“We are also very thankful that we skated our very best short program,” she added. “It’s a mix of emotions because we finished our skate and we felt very disappointed, but then to go on the podium and to achieve this goal, we felt very proud. In the end, we are proud of what we did this week. We are proud to be on the top of the podium at such a prestigious competition and we will take a lot from that.”

“I was telling Meagan, it was on my list to stand on the podium and hear the national anthem,” said Radford. “I’ve been waiting for that moment since I was 19, so I will remember that forever.”

Moore-Towers and Moscovitch skated last. The Canadian silver medalists put out a powerful performance to a Queen Symphony, completing a triple twist, a triple toe-triple toe sequence, a triple Salchow and their trademark lifts. However, Moore-Towers went down on the throw triple loop. The team won the free skating portion with 130.45 (68.14/63.31) points, setting a new season’s best for themselves, and had a total score of 196.78 points.

“We feel great about our performance,” said Moore-Towers. “It is a bit unfortunate that we lost the championship on an element we do easily all the time, but we don’t intend on that happening next time.”

“(At the ISU World Championships next month) we want to skate two clean programs,” she said. “We want to better ourselves from here and from Nationals and we’re really hoping that lands us on the podium. There are a lot of teams vying for the spot, and we are trying to get it. If we keep working hard and skate the way we know we can, it’s attainable.”

“As a team, our strengths are that we work well together and that we have a good connection on the ice,” noted Moscovitch. “We have pretty strong technical (elements) and I think and we’re always trying to push forward to increase the the level of all our skating, not just our elements. We want to be a whole package. Our best strength is our work ethic together.”

Castelli and Shnapir’s Tango routine was highlighted by a triple twist, a big throw double Axel and throw triple Salchow, but Shnapir’s Axel-toe was just a single-single. Like the other top teams, they earned a level four for all their lifts, but the death spiral and flying combo spin were a level three. The Americans earned a new season’s best with 117.04 points and 170.10 points overall

“We are very happy. It’s been a long last two or three weeks for us,” Castelli stated. “We are really happy we were able to perform again. We both would have liked a little better short, but overall we are very happy with where we started and ended.”

“We even had a little mistake in there, so we still have something to work toward. We can clean that up and get a higher score,” added Shnapir. “There was one little mistake on the second jumping pass, but we are thrilled with how the rest of the program went. It was strong and we felt very confident.”

USA’s Felicia Zhang and Nathan Bartholomay remained in fourth place at 167.30 points. Their Westside Story program included a triple twist, side by side triple toe, double Axel-double Axel and a throw triple loop, but Zhang fell on the throw triple Lutz.

“We are very pleased with our skate. We enjoyed it. We skated for us and for the audience and I thought we did a great job,” Zhang said.

“We put a lot of work, even in the one week since nationals, into the story of the program,” offered Bartholomay. “Our component marks keep reflecting that. We are going to keep pushing that. The technical stuff is the technical stuff, it was good.”

However, he won’t leave it at that.

“We are really open for improvement,” explained Bartholomay. “We had a triple whammy. It was our first championship event, an Olympic rink which we’re not used to, and we were out of the country for the first time together. At some points this week, I felt like I was learning so much I was like ‘ah!’ I feel we really kept ourselves together here.”

Cheng Peng and Hao Zhang of China impressed with a big quadruple twist, a huge throw triple Salchow, a throw triple loop, and their lifts in their Flamenco routine, but Peng fell on a crossover right after the twist. They also had trouble with the side by side jumps as Zhang reduced their combo to triple toe-single toe while Peng doubled the Salchow and stumbled. This new team finished fifth in their debut as a team at the Four Continents with 164.82 points.

“We are not so happy with today’s program, because we made some errors,” said Peng, who was hurting from the fall. “On the other hand, we had some very good elements.”

“Overall, this competition was so-so for us,” Zhang agreed. “As you have just seen, we did a very nice quadruple twist, but unfortunately afterwards my partner fell. (For Worlds) we’ll work especially on our short program because of the mistakes we made, but we also have to work on all other aspects in order to achieve a good result.”

Canadians Paige Lawrence and Rudi Swiegers redeemed themselves after their subpar short. They completed at triple toe, triple twist and throw triple loop in their program set to the Warhorse soundtrack. The only errors came when Swiegers stumbled on the double Axel-double Axel sequence and Lawrence touched down on the throw triple Lutz. The national bronze medalists moved up from seventh to sixth with 162.30 points.

“I am happy with our skate. We have been training really good longs back home and we are a strong team,” said Lawrence. “Our short didn’t represent us, so we knew we had to come out here, cut the short behind us, and really focus on what we could do (for the free skating).”

“We focused and attacked everything in the long, and it worked,” Swiegers emphasized. “I feel really satisfied after the free program because it was our season’s best for us, which always shows improvement. Did we nail everything with the GOE that we were going for? No, but we are very happy for what we did today.”

Wenting Wang and Yan Zhang of China messed up the triple twist and Wang struggled with the triple Salchow-double toe and double Axel. The team from Harbin placed seventh at 145.56 points.

“Our free program went okay, but we had a lot of mistakes during the program, and we would like to improve on that,” said Zhang. “Participating in our first ISU championship was a good practice for our team, and we practiced a lot. After going back home, we would like to first improve our quality, elements, and skating skills. We also want to improve our jumps including quad (throws), yet this comes later.”