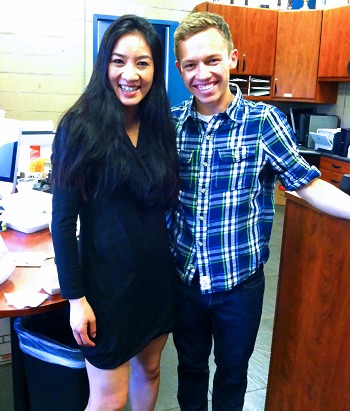 2013 Skate Detroit was a victorious homecoming for USA’s Grant Hochstein who won the event and landed a quadruple toe-triple toe for the first time in competition. The 23-year-old earned an impressive 16.15 points for this element alone in his short program to Ennio Morricone’s La Califfa.

“The short program was very well received last season, and my coaches and I felt that by adding the quad in this season, that it would be smart to keep the program,” Hochstein explained. “It’s comfortable and I really, really like it.”

Hochstein admitted to being a bit nervous; however, he was excited about performing the challenging jump in front of supportive family and friends.

“It was great coming back to Detroit and doing the quad,” he said. “I’ve been training hard, so landing it wasn’t surprising for me. Obviously, I was excited to have landed it on my first attempt in competition. I land it every day in practice, so I think I would have been more surprised had I missed it.”

Hochstein trained in the Detroit area for thirteen years before deciding to relocate in the spring of 2012 to the East West Ice Palace in Artesia, California, to work with Peter Oppegard and Karen Kwan-Oppegard.

“I needed to be part of a competitive environment where I wasn’t just pushing myself, but had other people pushing me,” he explained. “I train with people my age who all want to be successful in skating. For example, I really love training with Caroline Zhang. We have been pushing each other really hard.”

When asked about his coaches, Hochstein described them as follows: “Peter and Karen have a very set technique. They know their stuff and I really like that. They already have such a great feeling for what my body wants to do in skating and know exactly how to counteract that and make sure my technique is pure and solid. I know they have my best interests in mind and have exactly what it takes to make me be successful.”

At Skate Detroit, Hochstein debuted his new free skate to Trio Élégiaque, No. 2 by Rachmaninoff, Dumky Trio by Dvořák, and Piano  Concerto No. 3 by Rachmaninoff.

“I think these selections work well together and are really quite beautiful,” he said. “I wasn’t sure that my choreographer, Karen, would let me use the first selection of music because it is such a signature Michelle Kwan piece [from her 1997-98 short program]. She said ‘no’ when I suggested it last year, but she was open to it this year.”

Hochstein is well-known for being an ardent admirer of Michelle Kwan and has spoken often about what an inspirational figure she is to him, both on and off the ice.

“I got to show off my programs to Michelle when she was at the rink [in early August] and then she gave me a 20 minute one on one [lesson],” he revealed. “It’s just really amazing being able to talk to her like a normal person about normal things, and not being completely and totally star-struck like I was when I first came here.”

Hochstein helps pay for his own skating by coaching, and has started to work with some of Peter Oppegard’s students.

“It’s nice to be able to learn from him and work with him in a different facet of skating,” he said. “I love being able to give back to the younger skaters. I’m currently mentoring Karolina Calhoun (2013 US Juvenile Girl’s Champion).”

One day, Hochstein hopes to finish his college degree.

“I miss being in school,” he shared. “I’m almost done, but I can’t take classes with my current training and coaching schedule. I only have about a year left until I’m finished.”

When he’s not skating or coaching at the rink, Hochstein loves to read, take care of his dog (Kingston), go to the beach, hang out with friends, and imagine traveling back to places he loves, such as Rome and Paris.

For now, however, Hochstein’s focus is squarely on the 2013-14 season. He has set big goals for his skating this year.

“I’m going to do everything in my power to make the 2014 Four Continents team. Skating so well in Detroit has really made me realize the potential I still have. My goal for Nationals is to place in the top five. It’s kind of a scary big goal, but I told Karen, Peter, and Caroline to remind me of my goal every day and not let me lose sight of that. If you can see, hear, and live that goal each and every day, then it becomes a part of you and much more attainable.”