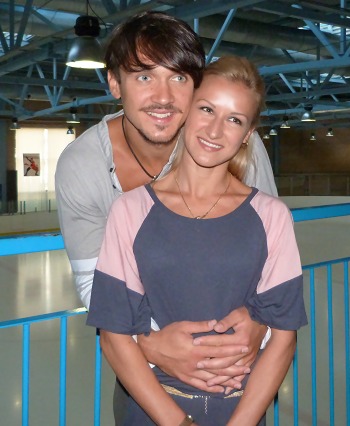 Tatiana Volsozhar and Maxim Trankov of Russia take a break during practice in Moscow, Russia.

Russia’s Tatiana Volosozhar and Maxim Trankov presented their programs for the 2014 Olympic season on August 14 in Moscow in an open practice session, which was attended by 15 television crews and numerous journalists and photographers.

For the short program the World Champions selected Masquerade Waltz by Aram Khatchaturian, while the long program is set to Jesus Christ Superstar.

“We probably approached our programs in an original way, as nobody composed them especially for us,” Trankov joked. “The genius Aram Khatchaturian wrote it in one case, the “Masquerade” to Lermontov’s drama by the same name. In this program we are telling the story of Prince Zvezditch and baroness Shtral. This is the moment of the ball when he meets the baroness and she gives him her bracelet. This is the key moment of this drama.”

“The other program is another immortal piece by Andrew Lloyd Webber, Jesus Christ Superstar, ” he continued. “I’ve dreamed about skating to this since I was a child because I really like this piece and I’ve been listening to it for a long time. Last year, we went to see a Broadway show of it and we were very impressed. We even thought about using it last year, but our other program was ready and we didn’t want to change it.”

Both programs were mounted by Nikolai Morozov and the team continues to work on them with choreographer Alla Kapranova.

“We are also thinking about consulting another specialist, especially for the free program, because it has a very difficult and dramatic character,” said Trankov. “We don’t just use some of the best known parts of the music, we are following a clear line and we only use parts that are about Magdalena and Jesus Christ.”

“We showed you some pieces of the programs, but obviously they need still a lot of work in the area of choreography and polishing,” noted Volosozhar. “You’ve seen a draft of our program, and in that, we’ll include our elements. Hopefully we’ll skate it as easily as a whole later on.”

Volosozhar and Trankov will go to Sochi for a training camp at the end of August. The official test skates – closed to the public and the media – will take place in early September. The team then plans to go to the Nebelhorn Trophy at end of September in Oberstdorf, Germany, to debut their programs in competition.