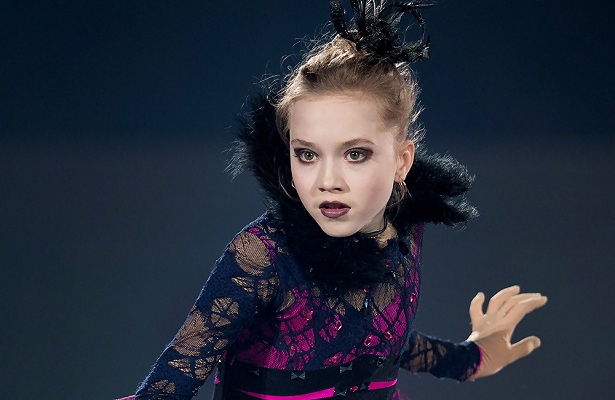 Russia’s Elena Radionova made history when she became the first female skater to defend the World Junior title earlier this year, and is now on her way up to the senior level.

“I had a lot of emotions at Junior Worlds in Sofia,” shared the 15-year-old. “I was very happy to win the second time and to be the only (Junior lady) to have won (Junior) Worlds for the second time.”

“Of course, when I came home, I had calmed down already, because this is the lowest step of the ladder to move up to the elite of the figure skating world,” Radionova told Golden Skate at her training site in Moscow. “Therefore, I was calm and I realized that I have to work hard in order to get to the World and European Championships and so on.”

Since her triumph at Junior Worlds, the petite blonde has been busy.

“I came home, I trained a little bit and then I went on tour with Show of the Champions that was held in many cities (in Russia),” the Muscovite noted. “I also found time to do my new programs and to work.”

“I really enjoyed skating in the shows and it gave me experience to skate in front of an audience every time,” Radionova shared. “At first I was nervous, because I wasn’t so used to it, but towards the end of the tour, I was calm. I knew what I had to do, how I had to perform, and with what kind of emotions. I had broken in the programs and at the end of the tour, I was confident and opened up.”

For the next season, Radionova will skate to a Flamenco piece in the short program that uses some lyrics, and as such, taking advantage of the rule change that allows vocal music in competitive programs. For the long program, her team selected music by Sergei Rachmaninov.

Both programs are aiming at making the expressive skater look more mature.

“They are new and are completely different from what I did before,” the skater pointed out.

As in the past, she is coached by Inna Goncharenko and worked with choreographers Elena Maslennikova and Ilia Averbukh.

Following the tour, she returned to Moscow in May and trained and also went to Korea to perform in Igor Bobrin’s Theatre on Ice. The plans for the summer include a training camp in Novogorsk near Moscow.

The two-time Russian national medalist did very well on her senior Grand Prix debut last fall, medaling twice and reaching the Final where she placed fourth. Even though she went on to take the bronze medal at the Russian Championships, she was ineligible for the Olympic Winter Games in Sochi as she was too young (she turned 15 in January 2014).

Now Radionova hopes to establish herself on the senior scene and would be old enough to compete at the European and World Championships in 2015. In order to do that, she is thinking about raising the bar.

“I’ll probably learn some new spins, make the jumps harder, and maybe, I don’t know yet, work on a triple-triple-triple combination,” she said. “I’ve done that in practice, but it was not very convenient to do in the program, because you get less (value), you have to calculate. Therefore, in training, I’ll learn several, but won’t try quads for now.”

The field in Russian ladies is as deep as it ever was with Olympic Champion Adelina Sotnikova, World silver medalist Julia Lipnitskaya , and Anna Pogorilaya (who ranked fourth at her debut at Worlds this year), as well as others. However, Radionova seems unfazed.

“Well, you just have to work a lot and then we’ll see what happens,”  she said with a smile. “If you qualify it’s good, if not, it is not good.”

“I don’t think too much about it,” she continued. “I don’t have any feelings about it, but I think as the season draws near, and I’m competing in my first events, then I’ll understand if this is pushing me. Obviously, this competition is motivating.”

Radionova feels especially motivated by Sotnikova, who trains alongside her at their club CSKA Moscow, but under different coaches. Nevertheless, Sotnikova’s Olympic title came as a surprise to the two-time World Junior Champion.

“Honestly, I didn’t expect that from Adelina, but she did a great job. I saw how hard she worked,” Radionova observed. “I skated with her on the same ice and I saw how she prepared for the Olympic Games. She was upset when she wasn’t selected for the team event. I think that was a plus for her because she prepared even better for the individual event.

“She could do everything and she earned her place,” the athlete concluded of Sotnikova. “This is motivating for me, of course. “She set an example of how you have to train.”

Radionova is currently scheduled to compete at Skate America and Trophée Bompard in the fall.