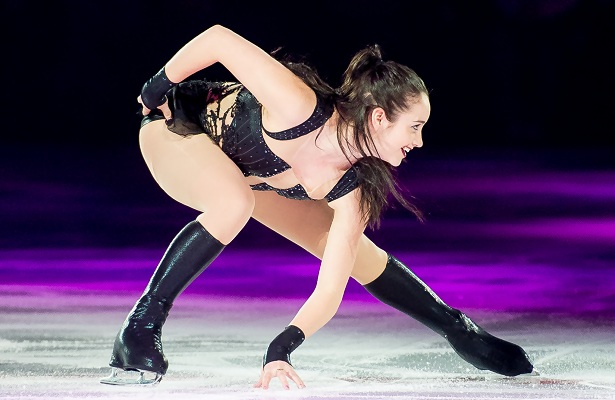 Canada’s Kaetlyn Osmond performs to “Mamma Knows Best” during a Stars on Ice show in May 2014.

Canada’s Kaetlyn Osmond will be making her season debut at the Wild Rose Invitational, a small event in Alberta that she participates in every year.

Editor’s note 8/3: Daleman was injured after the article was ran, and will not compete at Wild Rose.

“All is good now,” she said. “I’m back on the ice and training hard and doing triples again. I just wasn’t ready to push and bring on the probability of re-injuring myself.  I will be going to California for two weeks this month to work with Frank (Carroll) and catch up on the training I had missed.”

While the two-time Canadian champion’s main goal this season is to defend her national title, she would also like to make the World team and redeem herself for the 11th place finish she had last year.

“I am going to aim high again and finish in the top six,” said the motivated 18-year-old. “Of course it would be amazing to skate great and get high placements, but the redemption is more for myself than for placements.”

Last season, Osmond had to withdraw from both of her Grand Prix events due to a pulled hamstring, but recovered in time to win her second national title and went on to place 13th at the 2014 Olympic Games.

“I really surpassed expectations I had for myself, especially in practices at Worlds,” she said. “Unfortunately, my programs at Worlds did not go the way the practices did. At all.”

Osmond is confident that if she focuses hard and avoids injury, she will be one of the top contenders. She also knows, however, that anything can happen in the world of skating.

“There are a lot of young skaters coming up fast,” the skater noted. “I know it definitely won’t be easy and I’ll have to be at the top of my game. I know I need to work on my consistency and be more confident in my programs for competitions. I know what I have to do to be able to fight for the top 6 placements.”

Osmond, who is mainly coached by Ravi Walia, will be debuting two new programs this season. The short was choreographed by Lance Vipond, while the long was created by Pasquale Camerlengo.

“Both programs show a brand new side of me,” said Osmond, who wants to keep the music a surprise. “I learned a lot about skating with touring with Stars on Ice this year – new styles, new movements, and new ways of performing. My programs this year will take what I have learned and show a more mature side of me.”

“This year is about showing something new,” added Vipond. “A more mature, more refined, more patient skater. The focus is on more classic lines, more graceful, fluid movement, and deeper and longer running edges. My hope is that Kaetlyn can be just as mesmerizing to an audience when she is doing less.”

“Pasquale is a huge talent and an inspiration to myself as a choreographer and to Kaetlyn,” he continued. “She has long admired his work, especially with Akiko Suzuki.”

Osmond hopes to up her game in the technical element department, and will be using a triple Lutz and triple flip-triple toe in both programs.

Coach Walia says Osmond is progressing well and that she took a three week break after the Stars On Ice tour to rest after the Olympic season.

“We are now working on her new programs as well as building a stronger foundation for her jumps,” he said. “Our goal is to increase her technical content and improve her consistency. It will take time and patience, but she is very motivated for the future.”

Osmond’s spins and footwork have always been planned level 4s, so her intent is to be more consistent on achieving those levels, as well as obtaining more positive grades of execution.

Like many other skaters, Osmond dealt with moving across the country while growing up, and feels that her skating accomplishments have really helped bring her roots back home.

“This really helped with me appreciating what this sport can do for me,” she acknowledged. “I knew I had always gotten support from the east, although Marystown and Newfoundland went to extreme measures to show their support which means the world to me.”

Back in April, Marystown renamed their home rink to Kaetlyn Osmond Arena, and also named a street after her.

“They presented me with a symbolic key to the town,” said Osmond. “That means so much to me and makes what I have already accomplished, and what I still wish to accomplish in the future, more special to me.”

While the skater is focused throughout the week on training, she tries to relax with friends on the weekend.

“So far I have already gone camping,” said Osmond. “I will also make a long weekend trip to Newfoundland to visit some family. I plan to try to go to paintball with a few friends and also enjoy the carnivals that come to Edmonton.”

“I try to to have something planned every Friday night or Saturday to fully take in a summer vacation and not get overwhelmed by the intense training schedule,” she added. “Sundays, though, are definitely a rest day to prepare for the next week of training.”

Osmond received two Grand Prix assignments for the fall, and will be competing at Skate Canada and Trophée Bompard.