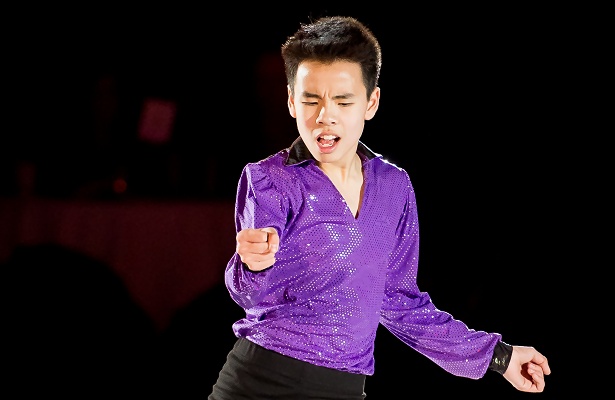 Canada’s Nam Nguyen will be kicking off his season at Thornhill Summer Skate in order to get the momentum going. Next, he might compete at the Skate Canada Autumn Classic, a new Senior B event, in Ontario.

“This depends on Skate Canada,” he said, “but I really want to do this competition.”

The 2014 World Junior Champion, who trains in Toronto, Ont., is also currently slated to compete at Skate America and Cup of China later this fall.

“After that there is Nationals in Kingston, Ontario,” Nguyen noted. “Hopefully I get to do Worlds in Shanghai, China, but that depends on my results and how well I do at nationals.”

The 16-year-old will be debuting two new programs this year. For the short, he will be skating to Nina Simone’s Sinnerman, choreographed by Jeff Buttle, and Nina Rota’s La Strada for the long, choreographed by David Wilson.

“When David let me listen to La Strada, I immediately fell in love with it because Daisuke Takahashi skated to it during the 2010 Olympics and so did Jeff Buttle during the 2002-03 season,” explained Nguyen. “Another reason why I liked it is because I was able to connect with it really fast.”

Nguyen, who has grown three inches since Junior Worlds, just wants to soak up the experience this year.

“I also want to show the world my full potential by skating well in both my new programs,” he added.

The teen, coached by Brian Orser, is currently working on his quad Salchow, and feels confident he will have it ready for Thornhill.

“Other that the quad, I’m working on increasing my speed going into the triple Axel now that it is a consistent jump for me,” said Nguyen. “Another thing that I’m working on is to increase the speed in my spins and improve the quality of the positions so that I can get better GoEs (Grade of Execution) for them. I obviously still need to increase my speed in skating overall.”

“We’ve worked a lot on the transitions into the jumps as well,” said Orser. “It’s a big jump moving from the junior to senior ranks, and we are always progressing. There are so many things that we are constantly paying attention to.”

Even at a young age, Nguyen is no stranger to the GoEs and realizes that the top skaters at Worlds last year had very high marks in their jumps and spins.

“Now that I’m in senior competitions, I want to improve the overall quality in my jumps and spins so I can gain extra little points,” he observed. “The qualities that I want to work on are: speeding coming in and out of the jumps, the positions in the air or while I’m spinning, and showing the judges that I have power in my jumps and spins instead of looking like a little boy.”

“Nam has really matured physically since we first started working together,” noted Orser. “He has grown at least 10 inches; that’s quite a bit. Every time I go somewhere and come back, like the Olympics or the Grand Prix Final, I notice changes. The “cute factor” is gone now. He is becoming a young man.”

Nguyen recently performed in Fantasy on Ice in Japan alongside Hanyu Yuzuru, Miki Ando, Stephane Lambiel, Javier Fernandez, and others.

“I had had so much fun in Japan and I also have many fans to support my skating!” he said. “This was a great opportunity for me to perform in front of an amazing crowd. I made so many new friends and it was such an honor to perform with so many great skaters!”