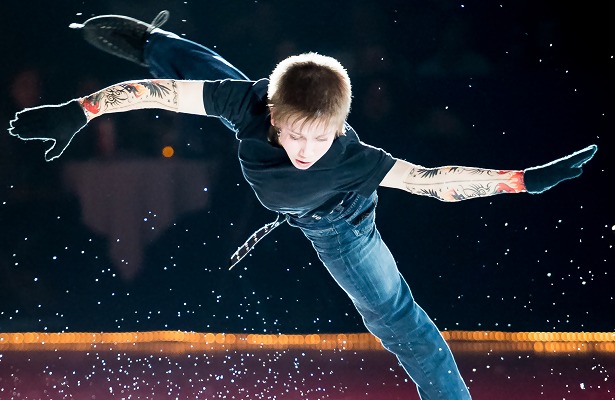 Canada’s Roman Sadovsky is ready to buckle down and get to work. Like many other skaters, the 15-year-old is now more inspired than ever after last year’s Olympic season.

“Not that I haven’t been motivated before,” he said, “but I feel like the Vancouver Games ended yesterday. Realizing that four years can fly by so fast, I figured that I shouldn’t take these next four years for granted if I want to qualify for the coming 2018 Olympics in South Korea.”

Sadovsky debuted his season last week at Skate Detroit, where he finished third overall behind Douglas Razanno (USA) and Elladj Baldé (CAN).

“The overall competition was really good,” he said. “I skated two strong programs and I was happy with my skates. I know what I need to work on now.”

Although he found the situation frustrating, the skater learned from the mishap.

“It was a good experience because you never know when these things can happen and you need to be ready when they do,” he said.

Sadovsky trains 25-30 hours a week at the York Region Skating Academy in Richmond Hill, Ont., where he has been coached by Tracey Wainman and Grzegorz Filipowski for the last six years.

“I can’t think of a better place to train,” said the teen, who is starting the 10th grade this year. “I love the facility, the training environment, and most importantly, the skaters and coaches.”

For this season, Sadovsky’s goals include placing in the top five at nationals. He also wants to have clean skates at his assigned Junior Grand Prix event, Czech Skate 2014, and make the Junior World team.

“I’m constantly working on my spins, step sequences, and just the overall quality of my skating,” said Sadovsky. “I’m hoping to see my whole program filled with just level 4 elements in the near future. I have gotten +2s and +3s for GoEs (Grade of Execution) on my spins last year, so this year I’m hoping to see more of them.”

The skater is also working on a triple Axel and hopes to include it in one of his programs this season.

“At this point I can only land them under-rotated,” he admitted, “but I keep practicing them and I take it day by day. Some days they’re better than others, but hopefully I can get them clean and consistent by the end of the year.”

Along with the triple Axel, Sadovsky is also working on the quad Salchow, and on occasion, the quad toe.

“(The consistency of) my quad Salchow is similar to my triple Axel, but the triple Axel is still the best jump out of the three,” revealed the skater.

“Roman has also been working on getting three triples in the second half of his short so he will be able to receive the bonus points,” said Wainman. “I am very happy with the progress he has made since Junior Worlds.”

Sadovsky’s new short program is to “The Prophet” by Gary Moore and was choreographed by Filipowski.

“My coach believes that in order to perform a great program, the skater needs to love the music that they’re skating to,” said Sadovsky.

“This one is more mature than my last short,” he explained. “What I like most about it is that I never skated to a blues-like piece before. I think that skating to this music will help me to become a more versatile skater.”

His long program, choreographed by Mark Pillay, is to last year’s “Les Miserables.”

“I’m not really changing it that much from last year,” said Sadovsky. “I usually keep each program for two years. The main reason I kept the long for this season is because I felt like I could still improve it. I’ll be polishing up the little details to transform a good program into a great program!”

Sadovsky will compete next at the Thornhill Summer Skate in Ontario.