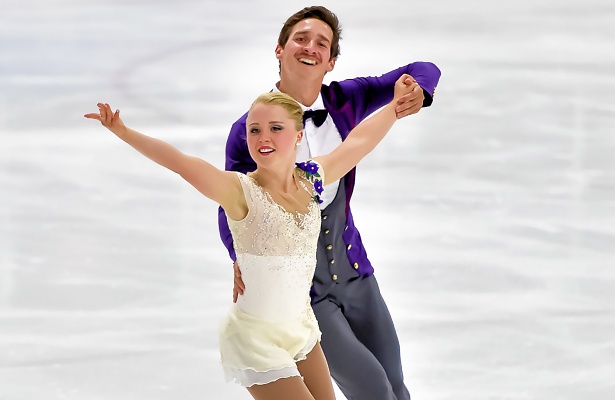 Canada’s Julianne Séguin and Charlie Bilodeau recently won their first Junior Grand Prix (JGP) event in Ostrava, Czech Republic, and are now at the halfway mark of meeting one of their main goals—qualifying for the JGP Final.

The Canadian junior silver medalists were the clear winners in the pairs event, placing first in both the short (55.21) and long (104.19) programs with a total score of 159.40 points. In addition, they exceeded all of their personal bests along the way.

“Both our programs went really well,” said Bilodeau. “We’ve work so hard this summer to be ready like we were for the beginning of the season, so we knew we were ready for this competition. The only thing we had to do was to skate like we do at home every day, and that’s what we did.”

Séguin agreed, adding that they are proud of their performances.

“We will redouble our efforts to be even better for the next competition,” she said.

The skaters, who train in Chambly, Quebec, are currently coached by Josée Picard along with Marc-André Craig, Valerie Saurette, Amélie Fortin and Chantale Lefebvre.

“What really stood out on the ice this time (in Ostrava) was their great chemistry and the fact that they are enjoying skating and doing it as a team,” said Picard.

Their short program, which was choreographed by Shae Zukiwsky, is to music from The Grand Budapest Hotel soundtrack.

“The story we are portraying is similar as to that of the movie,” said 21-year-old Bilodeau. “A gentlemen lobby boy flirts with a lady from the hotel. It’s not necessarily a love program, but is more about the complicity of our two characters.”

The long program, which depicts the passion and love between two people, is to Peter Gabriel’s “In Your Eyes” and “Wallflower,” and was choreographed by Marie-France Dubreuil and Patrice Lauzon.

While the skaters are competing as juniors on the international scene, they will be debuting as seniors domestically, and would like to make the podium at nationals.

“I think we have improved on the second marks: the quality of our elements and our chemistry,” said Séguin. “We also have the triple twist in both of our programs and a throw triple loop for the short.”

“They have really melded as a team,” said Picard. “We worked really hard on the connection between the two of them and it is starting to show. There is definitely some improvement.”

Last year, the skaters had to withdraw from the Junior World Figure Skating Championships after Séguin injured her back. During that time, Bilodeau’s grandfather passed away, and then his father succumbed to diabetes.

“Indeed, we had a rough second part of winter and spring,” said Picard, “but I think all this has helped them to bond more as a team. They had to really stick together and help one another to overcome the difficulties that life brought them.”

Séguin, 17, is still competing in the Ladies discipline and will be appearing next month at the 2014 Skate Canada Autumn Classic in Barrie, Ont., as well as nationals later in January.

Séguin and Bilodeau, who teamed up in November 2012, are hoping that they will have another chance at making the Junior World team this year. They are currently scheduled to compete again next month in Dresden, Germany at the 2014 Pokal der Blauen Schwerter.

“We are very happy with our first outing this year,” said Picard. “We had good comments on both the programs and we will go back home and work on improving things for Dresden.”