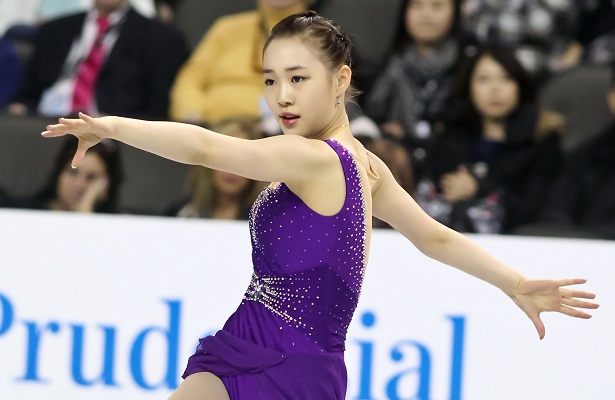 So Youn Park of South Korea is one of the many young skaters who was inspired by 2010 Olympic Champion and 2014 Olympic silver medalist Yuna Kim.

As a child, Park took ballet lessons, and then at the suggestion of her mother, tried figure skating when she was eight.

“I tried it, I liked it and I continued,” the Naju City native said.

When she was eleven, she met Yuna Kim—who was already a world medalist—for the first time.

When the Korean super star secured the three spots for the 2014 Olympic Games, Park shared ice with her alongside teammate Hae Jin Kim.

“It was a great experience,” said Park, who turned 17 in October. “What I enjoyed the most was exploring the Olympic Park by bicycle. There were bicycles in the Olympic village that the athletes were able to use to get around.

Her main goal in Sochi, however, was to reach the final. She accomplished that, placing 21st.

At the post-Olympic World Championships in Saitama, Japan, Park performed well, finishing ninth in what was her debut at the event.

“I was very excited about that and about getting two Grand Prix events this season,” said the athlete, who is coached by Hyun Jung Chi.

Prior to the Olympic season, Park had competed internationally only at the junior level, finishing 12th at Junior Worlds in 2013 and taking a silver medal at the ISU Junior Grand Prix in Turkey in 2012.

For the new season, Park worked with famous Canadian choreographer David Wilson on her new programs. The Korean Skating Union is supporting the development of their young skaters by giving them the opportunity to work with renowned choreographers.

“David Wilson came to Korea to work with me and it was really interesting,” said the 2014 Asian Trophy bronze medalist. “It was also challenging, but he taught me many new things.”

She is skating to “Introduction et Rondo Capriccioso” by Camille Saint-Saëns for the short program and to music from the new Romeo and Juliet soundtrack by Abel Korzeniowski.

While Park enjoyed working with Wilson on her choreography, her favorite part of skating are the jumps, which are getting more solid with time.

“I love them the most,” she admitted with a smile. “My favorite jump is the double Axel.”

The four-time and current national silver medalist debuted on the ISU Grand Prix of Figure Skating this season and finished fifth at both Skate America and Rostelecom Cup.

In Russia, Park stood in seventh place following a shaky short program with an underrotated triple-triple combo, wobbly Lutz and flying camel spin. She fought back in the long, landing five clean triple jumps. However, the loop was underrotated and she also underrotated a double Axel at the end. She pulled up to fifth place overall.

Park, who enjoys playing the piano in the little spare time she has, is trains in Seoul. Yuna Kim, who is studying at the university now, comes once or twice a week to the rink when her busy schedule allows it to work with the young skaters on choreography and expression, as Park revealed.

Coach Chi is pleased with the work ethics of her student.

“She is goal-oriented and hard working,” she said. “When something doesn’t work in practice, she will repeat it again and again and will not lose her smile.”

Park has set her goals for the season: “I am looking forward to the Four Continents Championships in Korea and I want to do well there. At Worlds, I want to be in the top ten again so that I can get two Grand Prix events next season.”

Step by step, Park is skating into the spotlight and has her eyes set firmly on the Olympic Winter Games 2018 in Pyeongchang in her home country.

It looks like she is on track, and Coach Chi is sure of one thing: “Even if she doesn’t reach the very top, she will leave her mark in the sport of figure skating.”