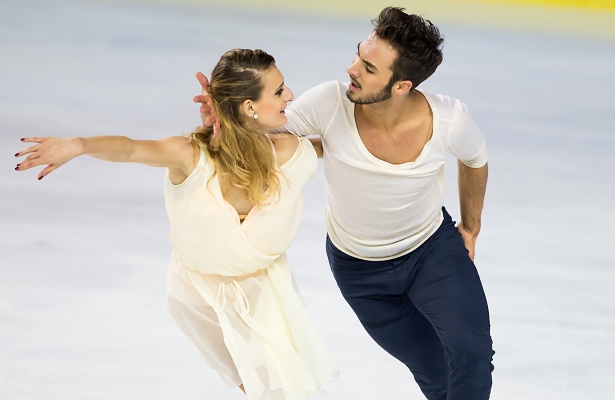 Gabriella Papadakis and Guillaume Cizeron of France have made quite a splash this season with their meteoric rise from “also runs” to medal contenders.

The ice dancers first upset reigning World Champions Anna Cappellini and Luca Lanotte of Italy and accomplished U.S. dancers Maia and Alex Shibutani to win the Grand Prix Cup of China. They went on to earn a second gold medal at Trophée Éric Bompard, and finally a bronze at the Grand Prix Final.

This is only the second season at the senior level for Papadakis and Cizeron, who finished 15th and 13th last year at the European and World Championships, respectively. Their breakthrough did not come as a complete surprise to experts, who have noted the excellent quality of their skating before, however, it isn’t often that a young team like them rises so quickly to the top.

The newly-crowed French national champions were surprised themselves.

“Going into the Cup of China, our goal was to get the bronze medal,” said 19-year-old Papadakis. “To win was a very pleasant surprise and totally unexpected.”

The French, who have been skating together for ten years and were teamed up by Papadakis’ mother, an ice dance coach, made a big move this past summer when they followed their coach, Romain Haguenauer, from Lyon to Montreal, Canada.

“Romain told us he was going to Canada and asked if we wanted to come with him,” recalled Papadakis. “At first it was a shock to leave everything behind and to go to Montreal. We were not prepared for this. After thinking it through we agreed (to move).”

“Everything happened really fast,” added Cizeron. “In June, we made the decision and on July 14 we moved. When we arrived, we first stayed with the sister of Marie-France (Dubreuil, one of their coaches). Within two weeks, we found an apartment close to the ice rink and the furniture.”

The excellent training environment with coaches such as Marie-France Dubreuil and Patrice Lauzon, not to mention the high-level other teams such as Spain’s Sara Hurtado and Adria Diaz, spurred the development of Papadakis of Cizeron. A lot of things changed in their training.

“We have increased the quantity of our training and are now training about 25 hours per week, on and off the ice,” said Cizeron. “We have changed the team even if Romain is still with us to help us. It is a new team that is working really well and we have new training partners. That is great and we were very well received.”

“I think that all these changes have helped us to grow and to mature,” the 20-year-old continued. “We know now that the athletic career is our priority. The progress happened quite fast, but we were very motivated by our new coaches and the new choreography.”

It was a change of theme and location. The move cost the ice dancers some time and they felt they were lagging behind.

“We committed fully to our training in order to be ready and to make sure that we are at a good level,” said Cizeron. “Now we see that our work is bearing fruit and we are very pleased.”

Indeed, the ice dancers have shown strong and consistent performances this season, and they also were right on with their choice of music this season. Their free dance to “Adagio” from Concerto No. 23 by Wolfgang Amadeus Mozart was quite a departure for the 2013 World Junior silver medalists, who preferred to skate to avant-garde and modern music.

“Romain suggested this music to us,” Papadakis noted. “He had seen The Park, a ballet which is set to this music by Mozart. He liked it and suggested that we should get inspired by this piece. It is new for us to skate to classical music and we enjoy it, although it is not something we’d like to do every year.”

“We wanted to do something that contains more natural movement,” said Cizeron. “When we started working on the free dance, we were a bit afraid that we wouldn’t be able to skate with so much flow.”

Their Flamenco and Paso Doble short dance to “Escobilla” and “Farruca” by Christina Hoyos stands out as well. Together with Hurtado and Diaz, the 2012 Junior Grand Prix Final silver medalists went to a Flamenco seminar with Antonio Najarro in Madrid, Spain, that allowed them to connect with this dance culture.

“We wanted to have a rather classical, pure Flamenco,” Cizeron shared. “We learned the basics. We chose music with a rhythmic base that had been created in a school in Spain. This school is producing only Flamenco music. We edited it then with Karl Hugo, a composer in Canada. He added the Paso Doble for the pattern dance.”

So far, the dancers have dealt very well with their success and the new expectations and pressure that come with it.

“At the beginning of the season, we told ourselves that we have to win a medal in the Grand Prix and then we got two first place finishes,” Papadakis said. “We also said that we want to be in the top five at Europeans and now I think we can aim at the podium. We wanted to be in the top ten of the World and now we are thinking about the top five.”

“We want to be on the podium (at Europeans),” confirmed Cizeron. “We will work for that, but we are already lucky to have made really good improvements and we feel like it already has been a good season. Everything is possible for us to have a podium finish, but we don’t know yet. This is sport.”

Papadakis pointed out that they will face strong competitors in Cappellini and Lanotte, the Russian teams, as well as the British team of Penny Coomes and Nicholas Buckland.