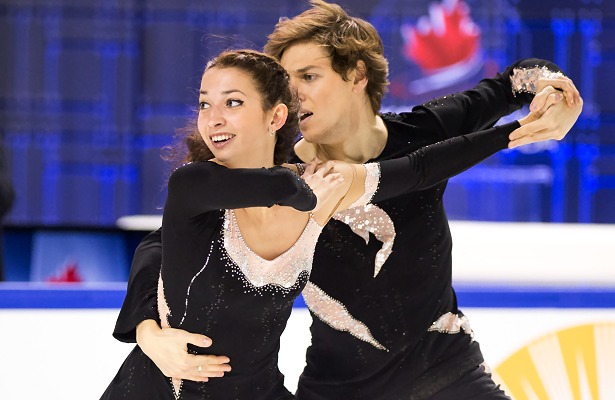 After Russian ice dancers Ksenia Monko and Kirill Khaliavin won the World Junior title in 2011, their career appeared to slow down. Unlike other World Junior champions who quickly made a name for themselves at the senior level, Monko and Khaliavin didn’t qualify for the Russian team for European and World Championships or the Olympic Games, due to the tough competition inside Russia.

By winning the silver medal at the recent Russian National Championships in Sochi, the team that is originally from Kirov finally made their long awaited breakthrough and is guaranteed a spot at the 2015 ISU European Figure Skating Championships later this month in Stockholm, Sweden.

At the end of the Olympic season, when Monko and Khaliavin had finished fifth at Nationals and once again were only substitutes for all major events, the skaters even considered quitting.

“I thought that either we might change federations or stop altogether,” reflected Monko, “but I sat down with Kirill and we talked. We decided we’d finish this season and then take it from there.”

However, the season has gone well thus far for the Russian silver medalists, and those thoughts have now changed.

“We are happy,” said Monko. “We are ready to continue working and go to the European Championships and show everything we can do there.”

Indeed, the 2010 World Junior bronze medalists had a good start this season. They finished fourth at Skate Canada (and were even second in the short dance) and then went on to claim the silver medal, their first medal in the ISU Grand Prix of Figure Skating, at NHK Trophy in Osaka, Japan.

“The first half of the season went really well,” noted Monko. “We skated really well in Canada at the Grand Prix. The free dance didn’t go as well, there were some technical errors. In Japan we redeemed ourselves and now at Russian Nationals we also turned in very good performances in both the short and free dance. Basically we’ve been working all season to improve, and now at Russian Nationals, we finally were able to show everything what we’ve worked on.”

A turning point for the students of Alexander Zhulin and Oleg Volkov was their free dance to “Sarabande Suite” by Globus, a music and theme they selected themselves and which gave them new motivation and energy.

“Alexander Viatcheslavovich (Zhulin) gave us the task to look for a classical music that we like,” recalled Monko. “We were searching for a long time and nothing was really right.”

Then Khaliavin found the music and both skaters fell in love with it.

“It motivated us when we were looking for music for the free dance after the last season,” explained Khaliavin. “The joy of figure skating (kept us motivated). If there wasn’t joy for skating, it wouldn’t make sense to skate. There is music that you just love and to which you want to skate to, and this is this kind of music. As soon as I heard it, I realized that I wanted to skate to it.”

“We had a lot of these rhythms in our career,” pointed out Monko, “also a Tango, Frida and Spanish music, and “Zorro” when we were kids. Therefore, we were happy to skate the Paso Doble this season. We liked the (Paso Doble) compulsory dance when there still were compulsories. The rhythm is close to me and to Kirill, and we like to show this passion on ice.”

The dancers are very excited and looking forward very much to competing at the European Championships.

“It means a lot to us,” Khaliavin shared. “It means that this time our season didn’t end with Russian Nationals and that more important competitions are coming up and we have to prepare for them, improve some things, and keep in shape. Personally, for me, that is great. I am just happy.”

Following Russian Nationals, the team did not go on vacation right away, but went to train in the last days of the year before celebrating the New Year, which is a big holiday in Russia. Shortly thereafter, they were back on the ice, preparing for Stockholm.

“There are a couple of elements in the free dance that we want to polish a bit,” Khaliavin noted. “We want to make them more spectacular. We also want to show more connection with each other and more emotions. We just want to fly at Europeans.”

Both skaters are reluctant to name specific expectations for their debut at the European Championships.

“I don’t want to predict any placements, but from ourselves we expect excellent performances so that there will be a progressive movement,” said Khaliavin. “We really want to shine at the last competitions of the season.”

His partner can’t wait for the competition.

“It is a great joy!” the 22-year-old stressed. “It is also a bit nerve-wracking as we’re going to Europeans for the first time. The most important thing is not to get nervous and show everything we can do and not think about placements.”

Monko feels that their success this season is in part due to the fact they were able to overcome nerves.

“Before, I went out to compete thinking, ‘Now I have to do everything and then I can beat everybody,'” she explained. “Now I go out just to skate for myself so that I enjoy it and that the spectators enjoy watching it. I don’t think any more about with whom I am competing, whom I need to beat, which scores I need to receive, and so on. I am skating and want to do everything well, but the decision is up to the judges. It has become much easier this way.”

“We changed a lot,” agreed Khaliavin. “We now are skating to what is suiting us and what we love. In our free dance, we can show off our strengths. We like skating at high speed, with strong emotions, show high-voltage skating, and getting powerful towards the end (of the program). We are going all out with the music in the third part.”

They are now looking forward to showing all of this at the European stage.