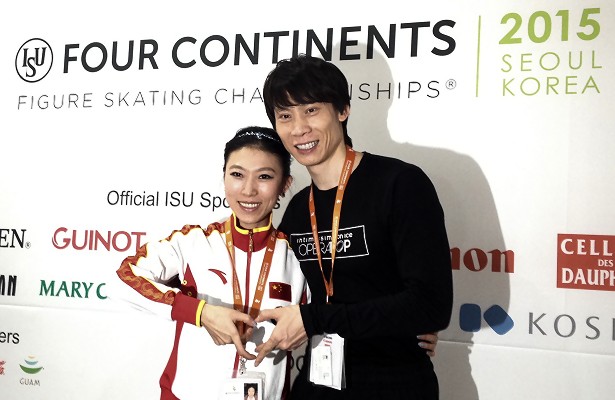 China’s Qing Pang and Jian Tong have medalled in nine out of 12 competitions at the ISU Four Continents Championships.

In 1999, the first ever ISU Four Continents Figure Skating Championships were held in Halifax, N.S., Canada. Pang Qing and Jian Tong, an unknown young Chinese pair, stepped onto the ice to compete in their first major senior international championships and finished fifth at this event.

Sixteen years later, the now well-known team participated for the twelfth time at the Four Continents in Seoul, South Korea, taking bronze for a record total of nine medals for this event.

“Really?” asked Tong, when he heard these numbers. “I haven’t counted at all. All these years and numbers may look meaningless to some people, but for us, it is worthy when you see so many people still appreciate what you do, still support you, and are still happy for what you achieve from their hearts.”

After Sochi, the 4-time Olympians, who took Olympic silver in 2010, announced their retirement. They took a short break and then started to perform in ice shows around the world. A comeback was even not in their mind when they took another vacation in Italy after shows in September. However, when they returned home, Pang noticed something had changed in her fiancé.

“I found him starting to gain some belly fat,” she laughed. “Although we kept practicing for ice shows, it was not as hard as what we used to do. I guess we were getting too comfortable, so I told him, ‘This is not what an athlete should look like. Let’s restart training or else you will get fat.'”

“We needed to keep fit for upcoming shows,” her partner admitted. “I needed some rehabilitation training for my knees, so we decided to do some real deal training.”

At that time, they were training to stay in good condition for the retirement ice show they planned to do someday as they never had a chance to officially say goodbye to their fans. However, when Pang realized this year that the World Figure Skating Championships would be held in Shanghai, she discussed it with Tong and they both agreed that it would a perfect opportunity.

Be that as it may, the road back has been physically and mentally tough.

“We didn’t expect it would be that hard,” admitted Pang, 35. “Although it is less than one year since Sochi, being back and competing in the arena is totally different from performing in the ice shows. We also didn’t expect Jian’s knee injury to get worse. We’ve been through a lot of ups and downs, our decision being questioned, and our condition being doubted, so I really want to thank him for supporting me, as well as everyone else who supports us.”

Despite the doubt that the figure skating community, as well as some friends, have had regarding the comeback, the two-time World Champions want to make clear that it is not about placement.

“We didn’t come back for the gold,” said Tong. “We came back for our fans and for figure skating in China.”

Even Nikolai Morozov, their choreographer and close friend for years, initially felt they were “crazy” when they revealed their decision to him. However, Pang and Tong showed their determination and he supports them.

The preparation and work began at the end of October, and the team used Christmas shows in Japan as their run-throughs.

“The deadline for the Four Continents entry was January 11,” said Tong. “We couldn’t make up our mind because we weren’t well prepared. We tried the free skate run through for the first time. Of course it wasn’t as polished as what we did in Sochi, but good enough for a competition. Our physical condition was not bad, so we finally decided to compete in Seoul.”

“We weren’t even doing triple toes when we made the entry,” added Pang, “but we, our coach, and the federation decided we needed a try before the Worlds.”

The competition result reflected their preparation. They made some mistakes in the side by side triple jumps, and the overall quality, while still high, was not yet up to their previous standards.

“Before we came we thought our physical condition was good,” explained Tong. “We were not very tired after practice and we started to feel our programs, but the competition was very different from practice. We felt very nervous. So nervous that we lost a bit of control and pace during performance.”

This competition also set the tone for the upcoming Worlds—the reason the five-time Four Continents champions came back. Pang admitted the difficulty getting on the podium in Seoul.

“It is a sport and the scores matter,” she noted. “Everyone has expectations of you, and of course you also want a medal, but it is indeed difficult. We hope to be more mentally prepared and achieve two goals at Worlds: thank our fans with two perfect performances, and let more people know and fall in love with figure skating through our comeback.”

While there is no definite plan for the couple after Worlds, they plan to get married and finish up some studies.

“I want to help our young pair skaters in national team,” said Tong. “Technically, artistically, and mentally, that’s for sure. There are more and more public ice rinks in China now, and I want to spread my knowledge and experience to help them as well.”

The years of hard training and competitions have taken a toll on both skaters, and Tong in particular, who wants to identify areas that could benefit other young and upcoming skaters in his country.

“I am looking back and trying to figure what could have been done to prevent (them) and what could have been paid more attention to,” he said. “Then I can tell those kids in their early years. In this way we can build a more systematic and firm foundation for figure skating in China.”

Beijing, China, is currently one of the bidders for the 2022 Winter Olympics, along with Almaty, Kazakhstan. Should Beijing be selected, the team is hoping that more youths from all over China will gain interest in the sport of figure skating.

“Currently, our national team mainly consists of skaters from northeastern part of China,” explained Tong. “If we successfully get selected for 2022, kids from northwest, south… every part of China may start to participate in this sport too. They can bring so much cultural diversity into the sport so that we will be able to see different costumes, choreography, and styles on the ice. There are a few years to go, but we want to bring these kids hope.”

In fact, they not only bring hope to the next generation, but to fellow competitors as well. Canadian pair Meagan Duhamel and Eric Radford, who won gold in Seoul, paid tribute to Pang and Tong, saying “Their comeback give us hope for the future.”

“If you really love this sport, and if you really value yourself as an athlete, you will always be demanding to yourself,” said Tong. “To stay competitive in the highest level, you first need to respect the sport, to follow the rules being an athlete in everyday training and everyday life, knowing what you should persist and what you should give up.”