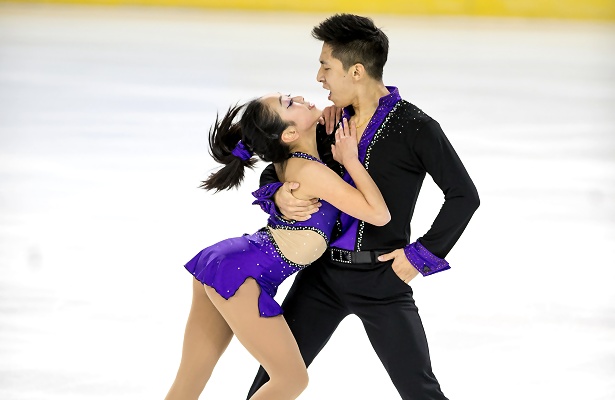 Ever since China’s Wenjing Sui and Cong Han entered the international scene back in 2009, this ambitious team has belonged to the top pairs, first at the junior level, and now at the senior. This season saw them finally breaking through at the World level when they took the silver medal at the ISU World Figure Skating Championships in front of their home country crowd in Shanghai in March.

The first half of the season was already a success for the team, which pocketed two silver medals from their Grand Prix events at Trophée Bompard and Skate Canada, as well as a bronze from the Grand Prix Final. The only time they finished off the podium was in February at the ISU Four Continents Figure Skating Championships where they were edged out by their teammates and returning veterans, Qing Pang and Jian Tong, for fourth place.

At Worlds, the three-time Four Continents champions put out a solid short program that was highlighted by their triple throws, and were third going into the long program with a new season’s best of 71.63 points.

“The audience encouraged me a lot, so I wanted to do my best to give something back to the audience,” said Sui. “The performance was almost what we do in training and the connection between the audience and us was very strong.”

“We skated last and the atmosphere was very fierce,” said Han. “All the audience cheered for us and we did feel the pressure, but this time what we gained is more than we can describe. We became stronger. This silver medal didn’t come easy to us. We cried right after our scores came up.”

Two weeks later, at the World Team Trophy in Tokyo, the team once again turned in two strong performances. The only glitch coming when Sui doubled the side by side triple Salchow in the free skate.

Not a bad run for Sui, 19, and Han, 22, which have shown a great deal of progress over the past few years. In fact, aside from the Worlds at the senior level and the 2015 Four Continents, the team has only finished once off the podium (2011 Cup of China) at the international level.

This season, their programs were set to “Stray Cat Strut” by the Stray Cats for the short and “Francesca da Rimini” by Peter Tchaikovski for the long—two very different pieces. While the short program was upbeat and fun, the free was dark and dramatic.

“I feel that this year we really have grown up,” said Han. “We are not a junior team anymore. Our coach, Hongbo Zhao, and choreographer, David Wilson, have helped us a lot to develop. We wanted to change and to upgrade our elements.”

“He suggested “Stray Cats Strut” to us,” explained Han. “He and Tracy Wilson felt that this music would suit us very well and he made a great short program for us that we liked.”

In addition to maturing artistically, the team also gained more consistency on their side by side triple Salchows, as well as an improved quad twist.

“It is not so difficult for us to do since I am quite small and can rotate fast,” Sui said of the twist.

Sui and Han, who teamed up in 2007, have performed the quad throw Salchow in the past and have been training it again. They would like to bring this element back to competition as soon as next season.

“We haven’t decided our new programs yet, but as we’ve already planned, we are going to add another quad (throw) to our program, so we will work on that element,” Sui offered. “We still need to discuss (details) with our coaches.”

While taking the World silver medal in front of their home crowd was a huge confidence booster for the team, they remain well grounded.

“For sure this is a great encouragement for us,” Sui pointed out. “It gave us confidence and determination, and we feel like we are one step closer to our goal. We will still train hard and follow our coaches’ instructions as we always do.”

“No matter what we’ve achieved, we still need to find our shortcomings and work on them,” added her partner. “We cannot lose our focus because of a medal. We want to keep improving every aspect of our skating, and try to catch up to other top teams in this field.”

Han is mainly referring to bridging the gap between them and the Canadian team of Meagan Duhamel and Eric Radford, that took first place in Shanghai by just over seven points.

“We are just catching up step by step,” noted Han. “At beginning, it was about 40 points, then 20 points.

“We still can see what we lack compared to them, but we still have room for growth,” Sui added.

The team from Harbin really enjoyed their experience at their first World Team Trophy, where Han was chosen to be captain for Team China. When asked about how he felt in this role, Sui quickly chimed in that he was the “official interpreter .”

“So in fact I’m only the nominal captain,” he joked. “Sui Wenjing is our real captain. She takes all my jobs. You can see that she even answers my question. Seriously, being the captain is a mission given by our team leader. My role was to help everyone get into this competition, to enjoy the opening ceremony and the Kiss & Cry shows.”

After the World Team Trophy, the skaters went for a short break.

“We can relax a little bit, and then we’ll see what our coaches plan for us to prepare for the next season,” said Han.