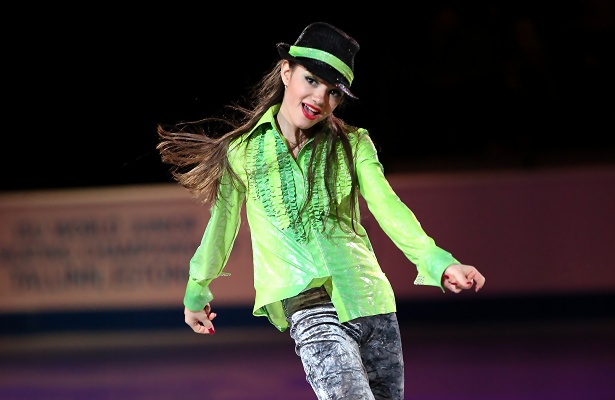 Russia’s Evgenia Medvedeva dominated the junior circuit this past season, winning each event she entered, including the 2015 World Junior Figure Skating Championships. The Muscovite also finished third at Russian Nationals on the senior level, but was not age-eligible for the European and World Championships as she had turned 15 only last November.

“Overall, I think it was a very good season for me,” Medvedeva commented. “The season before that didn’t really work out for me. There were third places and I didn’t make the podium (at nationals). I had injuries, yes, but you still have to fight.”

This past season, however, the delicate skater acquired a great deal more experience and is now getting ready for her international senior debut.

“Following the World Junior Championships, I trained until mid-May, and during this time, we searched for the music for the new programs,” Medvedeva said.

The skater resumed training in June at the center in Novogorsk near Moscow, and is now back at her “home” rink in Moscow working with long-time coach, Eteri Tutberidze, and coach Sergei Dudakov.

The music for the new short program is from the Melody of the White Nights—a 1976 movie which was well-known from Soviet times—and was chosen by Tutberidze and choreographed by Alexander Zhulin.

“Eteri Georgievna really liked the music from the movie,” said Medvedeva. “This is a very lyrical and beautiful music (by Isaac Schwartz) and is about a love story between a Japanese pianist and a Russian man.”

The whole team chose the music for the free program and was choreographed by Ilia Averbukh. They selected “Dance for Me Wallis” and “Charms” by Polish composer Abel Korzeniowski, as well as “Allegro” by Rene Aubry.

“Some parts we didn’t find right away,” explained Medvedeva, adding that Averbukh had really unique ideas. “This program is very interesting in its composition and with how the music sounds. I just want to say a big ‘thank you’ to my choreographers for my great programs.”

Medvedeva is fully focused on preparing for the season now and everything seems to be going according to plans in terms of training, getting mileage on the programs, and getting into shape.

“I can’t say that I’m learning something fundamentally new, but rather that I’m polishing what I already have,” said the 2014 World Junior bronze medalist.

Medvedeva is currently focusing on other aspects of her skating that have brought her this far already—consistent triple-triple combinations, difficult spins, and her light, flowing skating style—and she feels ready to take on the seniors.

“The whole path in juniors is just the preparation for getting out at the senior championships,” said the World Junior Champion. “Therefore, I feel mentally ready to go out and compete as this was my goal from the beginning.”

“Obviously, I want to be on the podium,” the teen acknowledged, “probably like every athlete that is competing.”

Medvedeva is approaching her senior debut calmly, but realizes that it will indeed be harder as the competitors are stronger.

“They already have made a name for themselves,” she observed. “You just need to go out there and break through so that you will also have a name and be recognized. I don’t have this feeling that people talk about that it is hard to leave childhood behind. I know this is the way it goes.”

“Obviously I’m looking forward to competing at the senior level, because it is much more interesting,” Medvedeva continued. “Our senior skaters traveled to countries that are far away. I would like to go China, to such cities such as Shanghai. I was in Japan at the Junior Grand Prix Final (in 2013) and I hope to go back and see other cities as I liked it there.”

In May, the 15-year-old had the opportunity to take a trip to an exotic place when she went to Thailand for her vacation.

“It’s great there,” she said. “The nature is beautiful, the food is tasty and the people are smiling. I really liked the warm water in the swimming pool and in the sea.”

While in Thailand, Medvedeva also met and made a new friend.

“At one of the excursions we did, we met our outstanding volleyball player, Tatiana Kosheleva (a World and European Champion, TF). Too bad that we spent not much time together, but we are now supporting each other in the social media. I am very happy and proud to know her.”

After her visit to Thailand, the Russian junior champion returned to Barcelona, Spain, where she had won the Junior Grand Prix Final last December. However, this time, it was just for vacation. She especially enjoyed her visit in a fun park to ride the roller coasters, which suits her adventurous character.

The Moscow teen has shown more than once that she has strong nerves and can deal with expectations and pressure.

“This actually helps me and pushes me,” she explained. “I won something and I raised the bar. I like it to prove that I can be the best and that I can go out and win. You don’t always come first. Sometimes you are second or third, and as a result, you go out in your next competition, you see the goal and you go for it.”

The skater describes herself as “quick-tempered” and to a certain degree, not very trusting in the sense that she doesn’t believing everything right away.

“I need to be convinced myself if something is like this or not like this,” Medvedeva explained. “Another trait of my character is stubbornness. I am very stubborn, and in order to achieve something, I go until the end. I think that a certain explosiveness is helpful for me. Together with these difficult sides of my character, I have one other, positive side: I can feel sympathy and give support.”

Medvedeva, who began skating after she was inspired by four-time Olympic medalist Evgeni Plushenko, considers the sport her job.

“It is work, because you go there in the morning and you are working the whole day until the evening,” she laughed. “I don’t have any regrets about that. Of course, I’m also enjoying it. If I wasn’t enjoying it, I wouldn’t be here. I would be lazy, I would be lying on the couch and I would tell my parents I’m not going anywhere, why should I train? I would be fat and I would go to school and would receive low marks.”

Medvedeva will enter the ninth grade this fall, however, the skater studies most of the time at home with the help of her grandmother and rarely attends classes. Just recently, she found a new hobby for herself.

“I got interested in the work of the Japanese director, Hayao Miyazaki, and I watched probably all the movies he did,” she revealed. “Now I’m waiting impatiently for the release of his new short movie with computer technology. I think it should be a cool movie.”