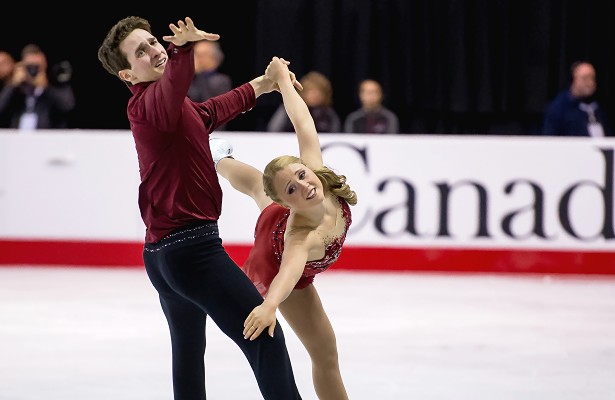 Canada’s Julianne Séguin and Charlie Bilodeau had an extremely successful season last year, especially on their final ride of the Junior Grand Prix (JGP) circuit. The pair team won both their events in Germany and the Czech Republic, as well as the JGP Final in Barcelona, Spain.

Despite the wins, the 2014-15 JGP Final champions knew they would still have their work cut out for them in their senior debut at the 2015 Canadian Tire National Skating Championships.

“We knew that the senior level was not going to be an easy,” noted 18-year-old Séguin. “We just kept focusing on the thing we were able to do properly with quality. We also wanted a spot for Worlds.”

“Of course our results from the JGP gave us confidence going into our first competition as seniors, but our mindset was only to keep doing what we were doing at home and what we were able to deliver in our JGP events,” Bilodeau added.

In Kingston, Ont., the 2014 Canadian junior silver medalists delivered two good programs, placing third in both the short and long. There were only a few mistakes, and they managed to clinch the bronze. As a result, they earned a spot on the World team.

“It was such a great feeling to perform in Canada at home,” recalled Séguin. “Earning a spot at Worlds was a big accomplishment for this year, and was also our beginning to the real senior level.”

“Our main goal at nats was to get our spot for Worlds and we reached it,” confirmed Bilodeau, who turned 22 two days ago.  “After this competition I was like, ‘Ok, things are getting real, we entered in a big competition.’ This was the beginning of our senior career and we couldn’t have asked for a better start.”

Three weeks prior to Worlds, however, the busy team competed at the 2015 World Junior Figure Skating Championships where they narrowly missed the gold by 2.47 points to China’s Xiaoyu Yu and Yang Jin.

“We had gold in mind, but we did the best we could do,” said Bilodeau. “At the end, I thing we had the maximum points that we could have with our programs and our elements which make me feel great. The only thing is that at this competition, the maximum was silver.”

“We were proud of our performance even if our goal was to reach a title,” added his partner. “We did our job and our best at this point, so we can only be happy of that. Yes the Chinese were first, but this is competition! That was our best performance so far. I also think that we were so close to the first place and that was a nice feeling.”

Although tired by the time the 2015 World Figure Skating Champions rolled around, the skaters felt well-trained and ready for their debut on the international level.

“We trusted in our programs and our focus was really to do what we were able to do at home and not put any pressure on our performance,” said Séguin.

“I think this was just the perfect way to enter as seniors,” said Bilodeau. “We did what we could do and we had good results with that. We couldn’t have asked for more.”

“We were also happy because we knew that we would have two Grand Prix events this coming season because of that eighth place finish,” added Séguin.

The World Junior silver medalists learned a great deal last season, especially how to get into the right mind set before competition.

“We were really methodical in practice at home, and it reflected in our performance in competition, so I thing we learned our winning formula,” said Bilodeau.

The team, who is coached by Josée Picard, Marc-André Craig, and Valerie Saurette in Chambly, Que., did a month of shows following worlds and then began training again for the upcoming season.

“Training is going well,” said Séguin, adding that they spent a week working with Lyndon Johnston in Florida. “We are working on new throws, new side by side jumps and a new lift.”

For this season, the team will be skating to “Monde Inverse” by Cirque du Soleil for their short program, which was choreographed by Shae-Lynn Bourne and Shae Zukiwsky.

“It’s an original program and we are pushing our self in new difficult transitions,” offered Bilodeau. “It is more complex and the transitions are more like dancers.”

Their new long program is to Procol Harum’s “A Whiter Shade of Pale” (performed by the Danish National Concert Orchestra and Choir) and an original piano piece by Karl Hugo. The routine was choreographed by Marie-France Dubreuil and Patrice Lauzon, and has a slightly different approach than last year’s routine.

“This program was made with the idea of a maturity and connection between us,” Séguin explained.

The team is currently in Pierrefonds competing at the Quebec Summer Championships, and are slated to compete at Skate America and Trophée Éric Bompard for their first Grand Prix events later this fall.

“We want to increase our second mark and do like last year—what we are able to do at home,” said Séguin of their goals for the upcoming season. “I also think that we will learn so much by competing with senior pairs!”

“This year will be a learning year, so like last year, we want to deliver good performances and increase our scores,” added Bilodeau.