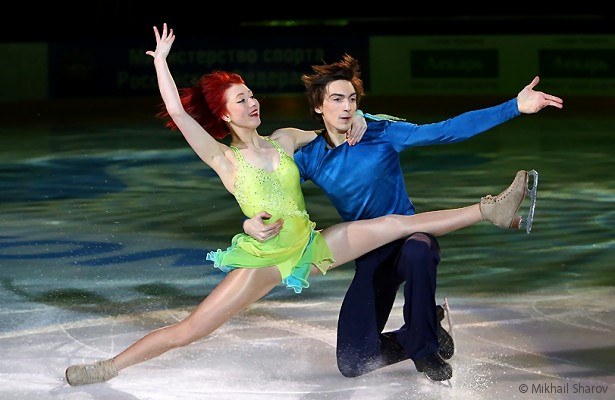 In order to pursue her dream of skating, British-born ice dancer Tiffany Zahorski has already moved to two different countries and learned two new languages. It is not easy to find the right skating partner, even when you are a promising ice dancer or pair skater, and when you finally do, things can get really complicated.

The 20-year-old from London is now skating with Russia’s Jonathan Guerreiro in Moscow under the tutelage of Alexander Zhulin’s coaching team, and is a member of the Russian National team. The skaters, who paired up in June 2014, have been unable to compete internationally thus far as the French Federation has refused to release Zahorski. They are confident, however, that the “release” issues will be resolved in the near future.

Following a five-week training camp in Turkey, the team has been on the ice training nearly every day in Moscow alongside Russian dance teams Ekaterina Bobrova/Dmitri Soloviev and Ksenia Monko/Kirill Khaliavin.

After Russian Nationals last season, where they finished fifth, the team spent several months working on technique and gelling as a team.

“It is very important now that you breathe and move as a unit,” said 24-year-old Guerreiro. “We actually feel that we’ve worked a lot on that, and I think that is one of the things that we’re trying to bring more into this new season.”

“We thought of what we could do to make sure that all our elements are on plusses,” he continued, regarding the Grade of Execution (GOE). “We looked at the spins, how to get them faster, how to make an entry, and how to make an exit. We tried to pretend that we are judges and think, ‘How are we going to plus this element?'”

“This couple is setting themselves apart with their western skating style and in some things, like the step sequences, they are unique,” Zhulin commented. “If they continue to work as hard as they did since the middle of the past season, there could be a few surprises.”

Zahorski and Guerreiro have selected two very different themes for their routines this season. The Waltz short dance is set to music from The Nutcracker, while they chose “Nocturne” and “Bohemian Rhapsody” by Queen for the free dance.

“We had the option to skate to the actual version by Freddy Mercury, but it was very powerful with the words and the meaning,” Guerreiro explained of the free dance. “However, when we listened to the instrumental version, it felt more modern and we really liked it.”

It was actually Zahorski’s suggestion that the team use the classical version of The Nutcracker.

“I love the music from The Nutcracker,” she said. “I really see Jon as a soldier, like a strong person. With our long lines, we can do something really beautiful. The music also kind of plays along with our free dance last year. We did something quite upbeat and waltzy (Amélie soundtrack). We feel with this piece that we can sort of do the same thing, but more grand and serious.”

As it stands now, it is still unclear when an international audience is going to see this promising team. Although the dancers just try to focus on their training and not the uncertainty that surrounds them, it is sometimes tough on them.

“This is probably one of the most difficult situations both of us ever have been in,” said Guerreiro. “Tiffany’s situation is much more difficult than mine. For me, it has been seven months like this, but Tiffany has been going through this for a few years. From my point of view, the most difficult part is that it’s such a delicate situation to deal with. For an athlete, it is your life, but other people don’t quite see it that way. We’re just athletes. It’s paperwork and it’s this and that, but for you, it’s your life.”

Zahorski agreed. “There is only so much you can do as an athlete, not to offend people, to get in the way, to do something more than you’re supposed to. You have to let other people deal with it, but sometimes in doing that, it’s out of your hands, it’s out of your control. As much as you want something, you can’t physically go and talk to the presidents and say, ‘Can you help?’ because it’s not your place.”

Zahorski, who moved from Great Britain to Lyon, France as a teenager to skate with Alexis Miart, last competed internationally for France at the 2012 European Championships. The team split up shortly afterwards and Zahorski began her search for a partner—first in France and then abroad. However, it was hard to find the right person and she even briefly reunited with Miart.

Finally, in April 2014, the British-French ice dancer came to Moscow for a try-out with Guerreiro. The skaters and coaches felt they were a good match right away.

“I was so happy when she contacted me and we had our try-out and everything went so well,” recalled Guerreiro. “Even Sasha (Zhulin) straight away said, ‘Oh my God, this going to be good. You guys have to skate for Russia.’ I just thought this girl has not been competing for two years, so what drives that fire? It’s such a difficult thing to get on the ice every day and just work and try to improve yourself when you don’t see the light at the end of the tunnel.”

Despite all the red tape, the athletes are grateful for the support they now receive from the Figure Skating Federation of Russia.

“Once they started helping it was a relief,” Zahorski said. “They took some of the weight off our shoulders. With me and my mom, we’ve been battling for over a year trying to negotiate a release for me. Considering that I haven’t competed for three and a half years internationally for France, I think it’s absolutely ridiculous that I don’t have the right to go and compete for another country when I’m not even licensed to France anymore. But that’s the way it is. For now, all we can do is hope that everything we planned for next season will work out.”

Meanwhile, Zahorski has applied for Russian citizenship and has the support from the ministry of sports for this. The skater, who always dyes her hair bright red, hopes to find out soon whether she will be granted citizenship. If it is approved, there will be no need for a release from the skating federation in France.

“My grandfather was born in Moscow, so hopefully that will play a part,” she said. “My name is Tiffany Anastasia Zahorski, but in Russian it would become Anastasia Bogdanovna Zagorskaia.”

Guerreiro had to laugh.

“It’s even more Russian than mine and I have citizenship,” threw in the Australian-born skater.

Indeed, the couple is as international as it goes: Zahorski is British but also holds French citizenship and has a Russian grandfather, while Guerreiro is the son of a former Russian ice dancer (and now coach), Svetlana Liapina. His father is Portuguese and the skater was born in Australia while his parents were working there.

Meanwhile, Zahorski has adapted very well to living in Moscow and already understands and speaks Russian.

“She does have a little bit of the Russian mentality,” Guerreiro pointed out. “If she didn’t, she would not be able to survive here. It’s really difficult.”

It’s been a wild adventure for Zahorski, who packed her bags and moved to Moscow after their successful tryout.

“It was a quite a big, huge culture shock first of all, because everything here is completely different to what I’ve been used to ever, especially living without my mom,” she said. “At first I really was alone. I had trouble controlling anything. It was kind of like going off to university, except that I was skating. I managed to find my way and I think that I’ve grown up a lot since I’ve been here. I learned to deal with a lot more things.”

“Even if everything just goes up in the air, I’ve had such a great experience living here, learning Russian, and just growing up and experiencing everything,” Zahorski summed up. “I’ve really enjoyed spending time with Jon and skating this past year despite all the troubles.”

On and off the ice, the great relationship between the skaters is obvious. They enjoy working and skating together. At first, Zahorski lived with Guerreiro and his family, but now she rents an apartment not far from the ice rink with a Russian roommate. She already feels at home in Moscow and is ready to represent Russia.