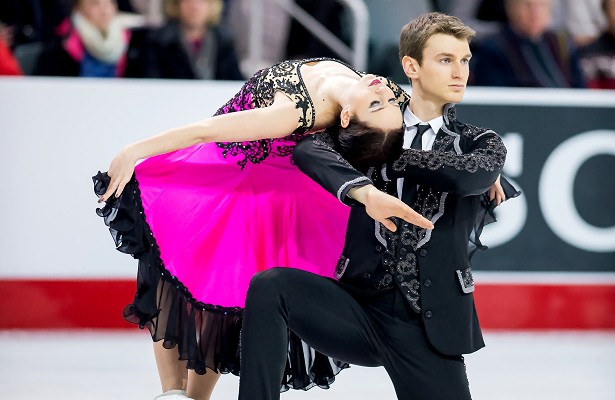 Last season, Canadian ice dancers Élisabeth Paradis and François-Xavier Ouellette were thrilled when they learned they had been invited to compete in their first two Grand Prix events—Skate America and Skate Canada.

“The emotion was so intense!” recalled Paradis. “Xav and I were yelling and laughing and jumping and crying… all at the same time! I kept thinking how lucky I was to be able to compete among the best skaters in the world!”

“We didn’t have any expectations other than doing the best we could and it worked really well,” Ouellette added. “Competing at Skate Canada was crazy because you could really feel the crowd cheering for you and the energy was unbelievable.”

Prior to the Grand Prix events, the team had competed at 2014 Nebelhorn Trophy, where they finished fifth. They placed fourth and seventh, respectively, at Skate America and Skate Canada.

Going into nationals, the team started thinking that Worlds might be a possibility, so they trained hard and held to the idea.

“We wanted to show everybody at nationals that we were in the race for that spot,” said Paradis. “We also wanted to touch the crowd with our free dance.”

At the 2015 Canadian Tire National Skating Championships, the team put out two good dances, placing fourth in both the short and free, but finished fifth overall with less than three points away from third place.

“Getting off of the ice, I have to say we were pretty upset with the points and the placement because we knew that some levels and long lift errors cost us that podium we were aiming for,” Paradis admitted. “However, after looking at the performances we gave and also at the whole season, we were glad to see everything we had achieved and that there is room for improvement for this coming season.”

“We felt great on the ice and gave everything in both programs, so we are happy when we think about it that way,” Ouellette added. “Our main goal was to make the national team and we achieved that.”

After nationals, the team took two weeks off so that Paradis’ ankle could heal from a painful lace bite. Soon after, they began working on the basics as well as the Ravensburger waltz.

Since then, training has been going well for the ice dancers who are coached by Patrice Lauzon, Marie-France Dubreuil, Pascal Denis, and Romain Haguenauer.

“Our new training mates (Alexandra Paul & Mitchell Islam and Madison Hubbell & Zachary Donohue) are really motivating us to train harder because they are high-level competitors,” said Paradis. “We push each other every day with healthy competition, but we also all get along really well. We enjoy the presence of each other and the atmosphere is nice.”

The team has been working on new lifts and a new spin for this upcoming season, and have also been focusing on a more mature presentation, as well as precision, in their skating.

“We like to try new things and I think some of the stuff we do has never been seen before and that’s what we want,” offered Ouellette. “This year, we are trying to have the real senior look. We want to skate with a lot of power and look in perfect control of what we do at all times.”

Their new short dance is set to Anouk’s “Lost” and “Kill,” and was choreographed by Dubreuil and Lauzon.

“We gave this program a special story that we hope will touch the audience and stand out from the other more classic short dances,” said Paradis.

Their free dance, also choreographed by Dubreuil and Lauzon, is to the classic “Bridge Over Troubled Water” by Simon & Garfunkel.

“Like usual, we like to give a story and a meaning to everything we do, and this one is really about friendship and being together in the midst of adversity,” Ouellette explained.

Paradis and Ouellette, both 23, participated at the Quebec Summer Championships last month, and are scheduled to compete next week at the 2015 U.S. International Figure Skating Classic in Salt Lake City, Utah. They then will compete at Skate Canada later next month.

Both ice dancers coach skating on the side and Paradis also studies nutrition at Université de Montréal, while her partner helps with his family’s construction business.

Their goals this upcoming season are to make the podium at nationals and earn a spot on the World team.