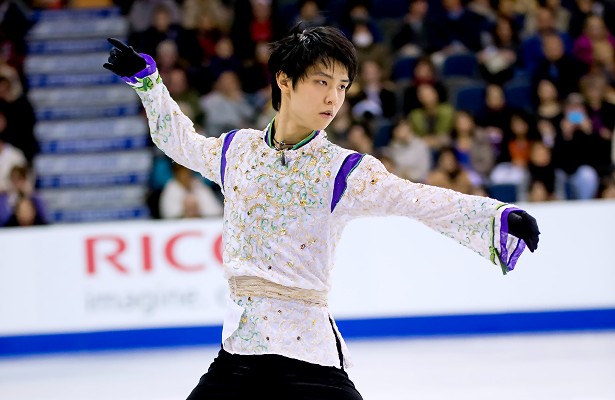 Japan’s Yuzuru Hanyu began the 2015-16 figure skating season with a victory at the Autumn Classic in Barrie, Ont., followed by a silver medal at 2015 Skate Canada in Lethbridge, Alta.

In Lethbridge, the 2014 Olympic champion found himself only in sixth place following the short program, mainly because he first popped his planned quad toe into a double and then repeated the double toe in his combination with a triple Lutz. As a result, he received zero points for those two elements.

In the long program, Hanyu rallied back and kept challenging himself, which is typical for the 2014 World champion. He went for three quads—one Salchow and two toe loops—something he had planned for the past season, but couldn’t do due to injuries. He touched down on the second quad toe, but nailed the other two. He also produced two triple Axels, but fell on a triple Lutz.

“I tried to skate exactly as how I practice every day,” said the 20-year-old. “It didn’t need to be perfect, but I just wanted to show what I do in practice. I believed that I could do it because I had a good feeling. So I was able to do every quad in the free program.”

“I fell on the Lutz, which is probably also a part of how I practice,” he added with a laugh.

For Hanyu, it was the first rematch with Canada’s Patrick Chan since the 2014 Olympic Winter Games. He lost to Chan this time and he did feel that it was a little different having the Canadian back in competition.

“I was a little bit too excited for the practice and the short program,” admitted Hanyu. “I didn’t think that I would feel different, but I think it was different with Patrick.”

Hanyu’s next event is NHK Trophy, which will take place in two weeks in Nagano, Japan. Until then, the 2015 World silver medalist will continue to keep improving. Performing three quads has been his goal, but he doesn’t feel that he has met it yet.

“I didn’t do them perfect yet,” said the two-time and reigning ISU Grand Prix Final Champion. “I’d like to do these jumps as clean as possible and work on the creativity of my programs. In the future I would like to do a kind of program that only I can do and express on the ice.”

Coming off the tough post-Olympic year, Hanyu didn’t get much rest. After a two-week vacation, the skater performed in a myriad of ice shows and events for his sponsors.

“It was a difficult season,” admitted the three-time Japanese national champion. “However, it didn’t feel too different from any other year. I didn’t have enough time for recovery, but I think I feel normal. I have to work for my fans. I have to think of other people and not just of myself.”

What bothered him most was having to spend a lot of time in treatment in Japan without coach Brian Orser after his collision with China’s Han Yan at 2014 Cup of China.

“I wanted to skate in Canada with Brian because he is my coach,” explained Hanyu. “I don’t have a coach in Japan, so I had to practice without a coach. That was a little difficult for me.”

After losing the World title to his training mate Javier Fernandez of Spain, Hanyu wanted to redeem himself at the World Team Trophy in Japan and worked hard for it. Afterwards, however, he felt tired and burned-out and began looking for new inspiration for his new free program.

The two-time Four Continents silver medalist chose the soundtrack from the Japanese movie “Onmyoji.” The movie is about Abe no Seimei, a famous onmyōji from the Heian period in Japan, and Hanyu actually met with Mansai Nomura, the actor who portrayed him.

“There are still two years before the Olympic Games and I wanted to explore my abilities to express myself in the performance,” said Hanyu, who participated in the choreography process for the program. “I think it is a program that many different people are involved in.”

When not training or competing, Hanyu continues his studies of human sciences online and hopes to contribute the skating world in the future as a teacher or in a business aspect.

Although the skater is constantly busy, he’s not bothered by the fact that he has so little time off.

“I think if I had one month time off, I would feel bored,” he said. “I love skating and I love the feeling of winning and of achieving. I don’t want to rest for one month.”