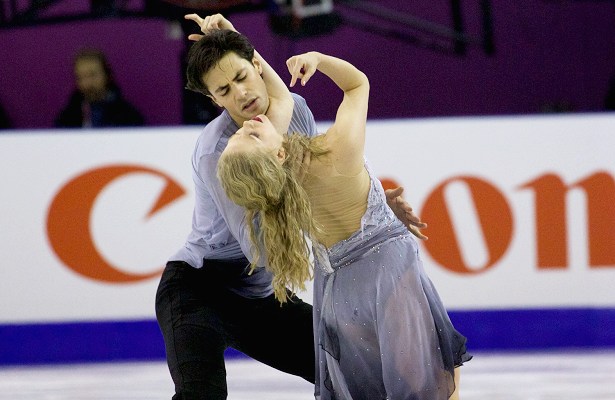 After a busy summer, Canada’s Kaitlyn Weaver and Andrew Poje recently capped off the first half of the figure skating season with a second consecutive win at the 2015-16 Grand Prix Final in Barcelona, Spain. The difference between winning a title compared to defending it was that the Canadians were shocked when they took the title last year.

“This year, we knew it was going to be a huge battle as we are always surrounded by teams who are all so very close, so we were not thinking about the result,” Weaver explained. “But we know it is a long season still and we need to forget about this and move on with the rest of the season.”

In Barcelona, the team earned a new season’s best (72.75) in their short dance to “The Blue Danube” and “Annenpolka” by Johann Strauss which featured a level 4 curve lift and twizzles. They also received a level four on both sections of their waltz pattern in which they met all key points for the first time this season.

The defending champions, who felt great after practices that week, were very pleased with their performance, and felt like the crowd was with them every step of the way.

“[Our short dance] is still fairly new and we’re looking to gain valuable mileage with it every time we’re out there,” said Weaver. “Since we’ve been here (Barcelona), we’ve been in a great mood and that helps with performing and knowing we have the training to back it up.”

“We built the program very quickly after we changed the original program from the beginning of the season,” added Poje, 28. “It happens naturally as the music builds and the energy comes. The crowd helped us build energy and atmosphere helped us to find extra ‘oomph’ at end.”

Their free dance to “On the Nature of Daylight” by Max Richter and “Walk”/”Run” by Ludovico Einaudi featured innovative lifts and smooth step sequences. Their straight line and rotational lifts earned a level four—as did their twizzles, and the team earned a new personal best of 109.91 points for a first place finish in this segment and overall (182.86 points) to defend their title.

Weaver and Poje, who are coached by Pasquale Camerlengo, Angelika Krylova and Shae-Lynn Bourne, felt very “fulfilled” with their performance, but admitted that the technical aspect could be better.

“We skated with our hearts,” said 26-year-old Weaver. “That was something that was severely lacking at Russia (Rostelecom Cup) where we left knowing we were missing it. It helps to define our team so that was the main goal (in Barcelona)—that we were connected and in the best zone we could be in. It feels great to have accomplished that.”

The 2014 World silver medalists acknowledge that the free dance is always evolving and that they had trained very hard since Rostelecom Cup to ensure they were in good physical condition to perform no matter what.

“The story has evolved as well, with the choreography, feelings, music, costumes, and so many things,” said Weaver. “What we are portraying is a couple that has gone through a great loss. Everyone can relate to that, but also how the couple is able to help each other through that and how sometimes that person is all the hope you have.”

“We wanted to change costumes on my side because we felt they didn’t accentuate our lines in the way we wanted to,” Poje explained. “They didn’t bring across the story and emotion of the program and we wanted a different feeling. In these current costumes we feel a lot better and a lot more within the program.”

The ice dancers were thrilled when Peter Tchernyshev joined the team earlier this year to work with them on the free dance, along with Shae-Lynn Bourne. The emotionally charged theme is right up their alley and they feel comfortable with the style, not to mention that the music has special meaning to both skaters.

“Despite how things can sometimes get you down, in the end it’s not so bitter after all,” Weaver explained. “I think it’s a monitor that we use in our lives. When we first heard this music, it really touched us. That’s how we really knew it was going to be the right choice.”

“Peter left no stone unturned in this piece,” added Weaver. “There’s no such thing as too much emotion, and the commitment and story will keep growing with us.”

Now the reigning World bronze medalists will be reviewing their performances from the Grand Prix season to see where they are lacking and where to push the technical mark. The team also wants to work on their transitions and different movements to ensure that both performances come across and draw in the audience and judges.

“We want to make sure come Boston (World Championships) that we have the strongest programs possible, so we need to work hard, do a lot of run-throughs and continue to push every day,” said Poje.

At the beginning of the season, their programs were not the cleanest—especially at Finlandia Trophy, although they still finished first (161.67). Nevertheless, they felt like a more mature team than last season.

“I think in our tenth season together, we’re getting the hang of things,” Weaver chuckled. “At this event, we were in more control of our feelings and nerves and felt wiser.”

Poje agreed. “We have a very busy off season, but looking back at it, we wouldn’t want it any other way because it helped us grow in many directions and gave us different boundaries to push. Like Kaitlyn said, the programs weren’t clean, but we were able to take away good feedback going into the Grand Prix season.”

The team took gold at both their Grand Prix events at 2015 Skate Canada and 2015 Rostelecom Cup, racking up a total of 14 medals combined in the eight years since they began competing on the senior circuit.

It wasn’t easy as the team had to change their original short dance after Finlandia Trophy without much time for preparation before competing at Skate Canada.

“We knew when we came back from Finland that we needed to make a change,” said Poje. “We knew it was going to be hard, whether we modified the current one or came up with a new one.”

The new theme really suits us,” added Weaver. “The change was definitely needed to happen to make sure that we could be the very best possible this season. We felt that it better portrayed the rhythms and that it was a better tribute to the waltz and polka than what our previous program was. It was a very, very busy two weeks!”

Bottom line, the 2015 Canadian national champions want to continue pushing themselves and end ensure that they come out stronger at every event.

“We want to be at the top of every competition that we’re at,” said Poje. “We feel like that we belong there and we just want to make sure that everyone is proud of us. We do that by making sure that everyone enjoys our performances.”

Although the 2018 Olympics may seem far away, they are relatively close, and Poje wants to make sure that they can be the best versions of themselves when that time comes.

“Every season we try to build upon our previous season to make sure that when that year comes, we’ll be prepared,” said Poje. “So we try to introduce new things and try to work on our weaknesses and make our strengths even stronger.”

The ice dancers don’t dwell on past competitions and view each one as a new opportunity to improve.
“Last season really taught us a lot,” Weaver explained, “but if anything, it taught us each competition is a new start and we have to make sure that we can show our very best each time.”

In addition to capitalizing on their new programs for the rest of the season, one of Weaver and Poje’s goals is to become World champions. The team has made seven trips worlds since 2007, and took silver in 2014 and bronze in 2015. They are hoping to complete their collection with a gold at the upcoming 2016 World Figure Skating Championships this March.

“It has been a goal of ours for a couple of years,” said Weaver. “Last year we set the bar really high with winning everything except worlds. At the same time, it takes some pressure off knowing that we’re still ranked first in the world, but are still somewhat the underdogs.”

“We want to be the best and that’s the goal,” she added. “We want to bring home medals for Canada and continue the forward momentum going into the next Olympics.”

Competing together for 10 years has solidified their partnership, which both skaters agree was special since the very beginning. They aren’t just striving for the same goals, but are also close friends and know how to work off each other.

“Over the years, we’ve developed those things and we know what helps and what doesn’t help,” offered Poje. “We’ve tried to be better versions of ourselves for each other throughout our whole career. I feel blessed to have Kaitlyn as my partner. I know that we feel that we’ve gotten stronger and stronger every season and we’ll continue to get stronger.”

Weaver agreed, adding that their journey together has been unique, with many ups and downs and twists and turns.

“No doubt we’ll still have those in the future to come,” she said. “After 10 years of being together, we know the other person will always be there, and that’s such an incredible feeling —just knowing there’s someone there who will have your back.”

As a result, it’s obvious that this is the reason the ice dancers are able to make quick progress and fine tune and grow every single year.

“We know each other so well and we have this common goal,” said Weaver. “We’re all about achieving that. It’s been a real joy and I wouldn’t change it at all. It’s been an incredible journey.”

Weaver and Poje will compete next month at the 2016 Canadian Tire National Skating Championships in Halifax, N.S.

“Our first event in Canada was the 2007 Canadian Figure Skating Championships in Halifax,” recalled Weaver. “It was the gateway where everything became magical and there’s no doubt that it will bring that again. I think that’s where it might hit us as really coming full circle.”