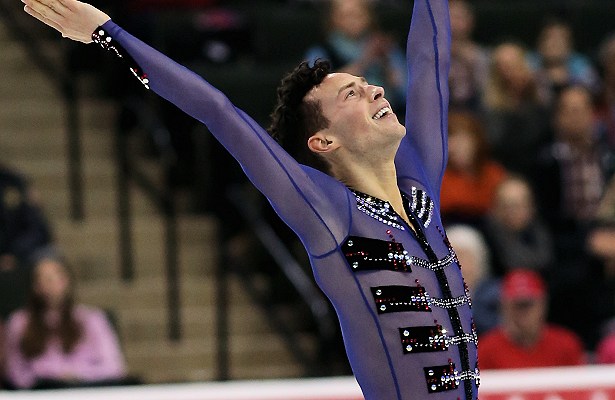 It was an exciting Men’s competition for the 2016 US National Figure Skating Championships in which Adam Rippon edged out Max Aaron by just over a point to win his first title in his eighth consecutive appearance at this event. In his second year on the senior circuit, Nathan Chen climbed from fourth to third overall to claim the bronze.

Many thought with last year’s champion Jason Brown and Joshua Farris (bronze medalist) sidelined, the goods were for the taking, however, the top men put out strong performances that didn’t disappoint.

Rippon, who stood in third after the short program, earned 182.74 for a first place finish in the long which featured a triple Axel-double toe, triple Lutz-triple toe, and five more triple jumps. While the 26-year-old underrotated and fell on his opening quad Lutz, he still earned positive grades of execution on all other elements, as well as level fours for all his spins and footwork. His total score was 270.75.

The veteran skater was clearly emotional, and admitted to being nervous between the practices, but was proud of what he put out on the ice.

“I always keep a pulse on what is happening throughout the event, and I knew exactly what was going on,” he said. “It didn’t change what I wanted to do and what I needed to do. I wanted to put out a really good quad Lutz. I wasn’t able to land it, but I felt secure with the attempt in the rotation and I knew from there on out I needed to skate a strong program and I am glad I was able to do that today.”

“To be sitting here eight years after I won my junior title, I can only say that it has been a really long road filled with ups and downs,” said Rippon. “I talked with my coach before I came here, Rafael Arutunian, and he told me that I had one goal and that was to skate clean. I knew after I made the opening mistake that I needed to skate clean and preform. I was really glad that I was able to do that today and come out on top and finally be a national champion.”

Chen shocked and surprised when he made history by becoming the first skater to land four clean quad jumps in the long program: quad Salchow-double toe-double loop, quad Salchow, quad toe-double toe, and a quad toe. The 16-year-old also earned a level four on two of his spins and footwork to place second in the long (180.60)  and third overall (266.93).

“I had initially planned to only do three [quads], but I felt fine going into the competition. I know my toes are there, the only modification I would do is to put in another triple Axel. My Axels are just off at times so I thought it would be safer to pull a toe rather than an Axel.”

Chen was thrilled to be on the podium with Aaron and Rippon and feels it’s an “awesome” step for him as senior skater.

“Throughout the season I’ve only been putting myself up as a junior skater and I’m glad that I was able to show what I’m capable of as a senior skater,” he said. “I’m happy with how I was able to perform. I did four quads, which I’ve never done before, and I’m really happy I was able to make that happen. I’m excited for the rest of the season.”

Chen’s only mistake in his routine to Saint-Saëns’ “Symphony No. 3 avec Orgue” was a fall on a triple Axel.

“It’s been like that for the past few years,” he said. “We’ve been working on that and slowly getting better and better. It’s still the main issue with me.”

The  2014 World Junior bronze medalist also felt it was a huge honor to achieve the technical score he received (100.24), adding that he was not planning for that many quads going into the competition, but after the short program, decided to go for it.

“I had nothing really to lose at that point so I decided that I could totally do it,” said Chen. “This past season I’ve had a little bit of a hip injury, so that’s kind of held me back on the toe, but I know my toe is technically there because of the amount of time that my coach has worked on my triples and fundamentals for the toe. I knew I had that. I just really had to focus mentally for my two Sals in the beginning.”

Hearing the crowd roar and cheer, Aaron had to skate after that performance.

“When I’m out there, it’s just me against myself,” he said. “That’s what it has been all about this year – how well can I perfect my craft. Nate is a competitor and does not back down, so I love seeing him out there. For me it is a huge honor to skate after him.”

Aaron, who was first going into the free skate, placed third in the long (177.72) and slipped to second overall (269.55). The 23-year-old gave a strong performance to “Black Swan,” which featured two quads: a quad Salchow-triple toe and quad Salchow, as well as two solid triple Axels. The skater also earned a level four for all three spins.

“Today was a step in the right direction,” said Aaron. “I fought through the performance. It wasn’t what I trained. I’m glad I’ve stuck with my process, and again came close to a clean performance. I’m trying to get them out as much as I can so every time I step out I make things happen.”

“That triple Salchow…that was a tough one,” he added. “That was a mistake on my part, and I think I could have performed the footwork a little better.”

Aaron, Hochstein, Rippon will represent the U.S. men at the Four Continents Figure Skating Championships, while the top three men have all earned a slot on the U.S. World team.