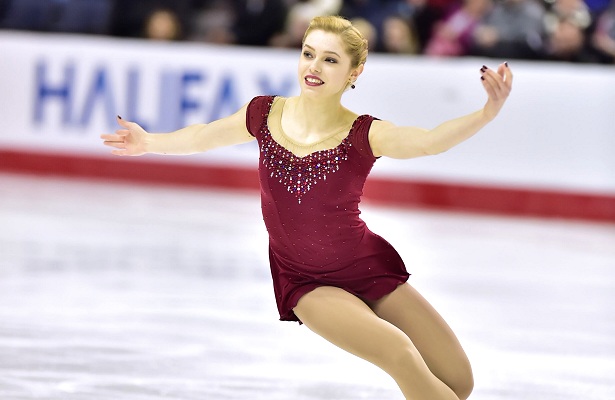 The Ladies’ final at the 2016 Canadian Figure Skating Championship was a tale of David versus Goliath…if there were two Davids and all three were women. Teenagers Alaine Chartrand and Gabrielle Daleman did what some would see as the unthinkable, overcoming fan favorite Kaetlyn Osmond with free skates that may have catapulted Canadian ladies skating into Russian, American and Japanese echelons.

Alaine Chartrand swept her way to the ladies’ gold medal with her clean “Gone with the Wind” free skate that included a triple Lutz-triple toe, double Axel-half loop-triple Salchow sequence, four other triples and a double Axel.

It was a ‘Frankly my dear, I don’t give a damn’ response to competing against her more decorated rivals: comeback favourite Katelyn Osmond and last year’s champion Gabrielle Daleman. The 19-year-old earned 133.18 in her free skate and totalled 201.99 points overall.

“I’m pretty shocked,” she said of the result.

A roar began at the Scotia Centre in the final moments of her skate; the audience knowing they were witnessing something great.

“I was doing the back to back spins and I wasn’t even into the second spin yet and people were screaming and just building with the music and I was like ‘Okay, don’t fall on your spin, just make it to the end,'” Chartrand said, laughing.

Listening to Daleman’s whopping score of 133.55 was slightly rattling to Chartrand.

“That was really tough hearing her score before I skated, but our whole motto has been ‘just do your job and the pieces will fall into place,’ so I just knew if I did my job I would be happy,” she said. “I am just so happy to put that out there after I’ve had some rough long programs this season. That feels just amazing!”

“This is going to be big news in Prescott,” she said of the reaction she expects from her hometown.

Coach Michelle Leigh was noticeably emotional in response to Chartrand’s breakthrough; reminiscent of her elation and tears upon Jennifer Robinson’s 1996 surprise national title win over then favorite Josée Chouinard.

Leigh insists Chartrand can break into the log jam of Russians, Japanese and Americans at the 2016 World Figure Skating Championships.

“We have the technical base mark to compete with them, so then it’s just up to us to get it done when it counts,” she said. “That’s always the thing because they can whip off so many triples.”

One of the triples Chartrand may continue to compete is a triple Axel. After an unsuccessful season of attempts this year, Leigh insisted that the high-risk element hit the back burner to flourish at nationals on the premise that Chartrand could train it again should she qualify for Four Continents or Worlds.

Defending champion Gabrielle Daleman was the first of the top three following the short program to take the ice and skated lights out. Seven triple jumps, including a triple toe loop-triple toe loop during her “María de Buenos Aires.” warmed over the judges who awarded the 17-year-old with 133.55 points; resulting in 197.99 points total.

She credits her brilliant skate to a pep talk with choreographer Lori Nichol by telephone moments before she took the ice.

“I needed more motivation and I needed someone to calm me down and tell me that I can do this and tell me that I have worked hard,” Daleman explained. “So just hearing that from her helped to get me in the mood and more determined and motivated today.”

“I am so proud of Alaine for getting a national title,” Daleman added. “And now to share with Kaetlyn and Alaine…all three of us, top three girls in Canada have all won nationals now. That just proves how much this sport has grown in Canada and how much we’re all improving and I’m so proud today of what we did.”

The waiting game for the final placements was torturous for Daleman.

“I was running around trying to do a cool down,” she said. “I knew I laid down the gauntlet and did a good free skate, but I knew it was going to be close and crossed my fingers that my free skate would hold it down and it did.”

The wait was for overnight leader Kaetlyn Osmond to perform her free skate. Still on the comeback trail, Osmond’s credentials still impress: two-time Canadian champion and 2014 Olympic bronze medalist. However, troubles on her flips–stepping out of one and doubling the other–and a single loop tacked onto the end of a three-jump combination marred the program. She earned 127.24 for a total of 197.87; a mere .08 points off Daleman’s combined score.

“It didn’t work out fully how I wanted it to, but I’m happy,” the 20-year-old bronze medalist said of her Tango long program.

Skating after Chartrand, Osmond was on the ice when Chartrand’s scores were announced.

“I was really happy to hear how Alaine did,” said Osmond. “It was great to see and really exciting and surprisingly it didn’t effect me.”

“I didn’t feel more and more tentative,” she said of her performance despite the mistakes. “I felt more and more relaxed actually throughout my program. I felt super comfortable. My jumps sometimes get away from me, but it’s something I have come to work with and it’s something I had to deal with growing up. I know they’re there and I know I can do them, so it is only a stepping stone.”

“I have been fighting a pretty bad cold all week and it’s the first day I’ve actually been able to breathe through my nose,” Osmond said of a cough that caused fits while speaking with the media post-skate.

“This cough is getting to me and It’s really hard after a long program to actually breath.”