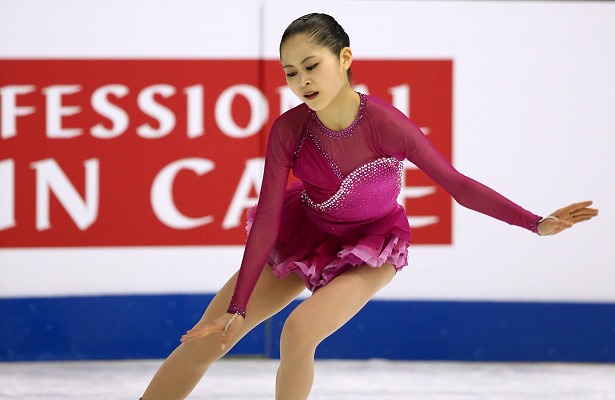 Satoko Miyahara of Japan finally struck gold at the 2016 ISU Four Continents Figure Skating Championships after collecting silver medals at this event in 2014 and 2015. USA’s Mirai Nagasu proved that she’s back in business by taking the silver medal, while Japan’s Rika Hongo repeated as bronze medalist.

Miyahara was very consistent and skated two clean programs with new personal best scores. The Japanese Champion led after the short and then put out an excellent free to “Un Sospiro” by Franz Liszt. The 17-year-old nailed seven triple jumps, including two double Axel-triple toeloop combinations and two triple Lutzes, and produced level-four spins and footwork.

The teen from Kyoto also showed off her musicality, and scored 142.43 points for a first place finish in the free skate and overall (214.91) with 21 points to spare.

“In the first half of the season I was happy with my performances, but I had a lot of second places,” said the 2015–16 Grand Prix Final silver medalist. “I was also twice the silver medalist at Four Continents (2014 and 215).”

Coming into this competition, the student of Mie Hamada, Yamato Tamura, and Yoko Niino, was aiming for a win, and was pleased she met her goal. She was also relieved she didn’t make any mistakes.

“It gives me a good feeling heading into Worlds,” said Miyahara, “I was a little bit nervous. I felt nervous even in my last jump, but I stayed calm and believed in myself. I’m confident about the elements of my free program and I’ve been doing well in big competitions this season, which led to this success here. At Worlds, there will be a lot more great skaters, so I would like to make sure not to be beaten by them.”

Nagasu showed a lot of improvement in the quality of her jumps. Skating to music from The Great Gatsby, the former U.S. Champion landed a triple flip-triple toe and five other triples without any under-rotations, and her spins were excellent as usual. The 22-year-old picked up 127.80 points, close to her personal best, which added up to 193.86 points overall.

Five years since winning her only medal at the Four Continents Championships, a bronze, Nagasu returned to the podium at this event.

“I think it’s safe to say that I haven’t skated like this in a long, long time,” said the 22-year-old. “It’s taken a lot to get me back on the podium and I’m so grateful to my team and support group who have gotten me here. I hope to only improve and continue on this track of improvement.”

The Californian plans to continue training in preparation as an alternate for the World Championships.

Hongo was taken by surprise by a fall on her opening triple flip-triple toe combination, but she recovered quickly and completed five triples in her crowd pleasing “Riverdance” program. The 19-year-old from Nagoya, who stood in fourth after the short, was ranked fifth in the free skate with 117.51 points. Nevertheless, with a total score of 181.78 points, she was able to capture her second consecutive bronze at this event.

“I didn’t think I would make a mistake in the first jump,” reflected the 19-year-old. “I don’t know why I made a mistake, but I enjoyed skating until the last moment. I’m glad I made it back on to the podium again, but I’m not completely satisfied with my performance. I think I have many things to improve and I can do much better.”

Korea’s So Youn Park came fourth, her best result in three appearances at Four Continents. She fell on a triple flip, but overall was solid (178.92 points).

“I’m satisfied with the final result I got and the improvements I made,” said the 18-year-old.

USA’s Gracie Gold finished fifth at 178.39 points. The U.S. Champion fell on her triple Lutz and triple flip in the short program and ranked only ninth in this segment. The free skate was much better with five triples, although she didn’t go for her triple-triple and her double Axel-triple toe, and she finished third in this segment.

“It was a respectable performance, and at least the quality of what I did was nice,” said the 20-year-old of her long program. “Knowing that I can skate a free program at least that well, after what happened in the short, I feel hopeful about Worlds. I think anyone has a chance at that World podium, you just have to go two clean skates. This was just a trial run for me, to get the bad luck out.”

Kaetlyn Osmond of Canada pulled up from 11th to sixth place with a solid long program (175.63 points).