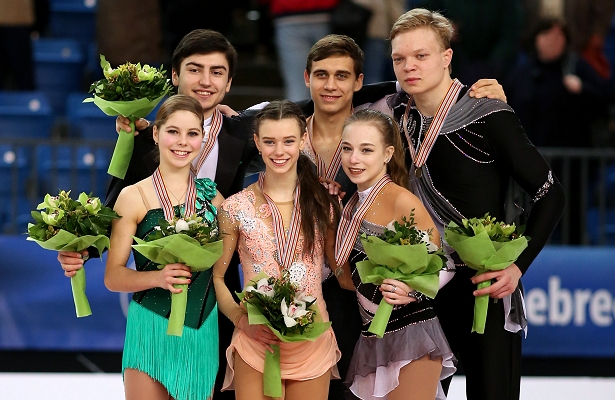 Pair skaters Anna Duskova and Martin Bidar of the Czech Republic won a historic first gold medal for their country at the 2016 ISU World Junior Figure Skating Championships in Debrecen, Hungary, on Thursday. Russians Anastasia Mishina and Vladislav Mirzoev and Ekaterina Borisova and Dmitry Sopot took the silver and bronze medals in what was their debut at World Juniors.

Skaters from the Czech Republic had won two silver medals at Junior Worlds so far – Michal Brezina in 2009 and the pairs team Jana Blahova and Ludek Feno back in 1978. Even though Duskova and Bidar were silver medalists at the Youth Olympic Games and the 2015-16 ISU Junior Grand Prix of Figure Skating Final, they were challenged with strong competition from the Russian teams and couldn’t be sure of winning. Nevertheless, they Czechs turned in two clean performances to earn the title.

Duskova, 16, and Bidar, 17, went into the long program with a five-point lead. Their solid routine to “La Leyenda del Beso” featured side by side triple toes, a triple twist, and a throw triple Salchow and Lutz. The Youth Olympic Games silver medalists also executed a level four press lift and level three reverse lasso lift, earning a new personal best score of 117.11 points and an overall score of 181.82 points.

“We really tried to do everything we can do and we did it,” said Duskova, who was overwhelmed.

“For next season we want to try the seniors,” Bidar offered. “It will be very hard, because there are three lifts in the free skating and we have to improve.”

When asked whether they would want to work on quads, Bidar he answered, “No, we want to improve our triples.”

Mishina, 14, and Mirzoev, 19, were new faces on the scene. Following a subpar performance at the Junior Grand Prix (JGP) in Colorado Springs, the team from St. Petersburg were not assigned a second JGP event, and as a result, did not qualify for the Final. However, when they won the Russian Junior National title, many realized that they would be top contenders in Debrecen.

The two-time Bavarian Open champions delivered strong performances without major errors in both programs. Their free skating to the French songs “Attention Mesdames et Messieurs” and “La Vie en Rose” included a triple twist, a throw triple loop and Salchow, as well as a side by side triple Salchow, triple toe-double toe-single loop, and two level-four lifts. The Russian Junior champions scored a personal best with 113.10 points and collected 172.60 points to remain in second.

“We didn’t skate as clean as we wanted,” Mirzoev said. “We did one mistake, but the other elements were good. We did our job,” Mirzoev explained.

“We would like to learn the quad twist and maybe a quad throw (Salchow),” he continued.

Borisova, 16, and Sopot, 17, had won gold at the JGP Final and Youth Olympic Games, however, her fall on the double Axel in the short program ended their winning streak. The team from Perm was able to come back stronger in their “Lawrence of Arabia” free skating and impressed especially with their throw jumps.

While there were no problems with the double Axel in the long, the Russian Junior bronze medalists do not yet have a solo triple jump yet. They earned 110.44 points and moved up from fourth to third at 169.00 points.

“We’re 90 percent satisfied with our performance,” Borisova told the press. “The missing ten percent we lost in the short program when we made the error on the jump. We still have three junior seasons ahead of ourselves and hopefully next season we’ll win all gold medals.”

Ukraine’s Renata Oganesian and Mark Bardei completed the success of the East European pair teams by finishing fourth (155.08). They stood in third following a good short program to “The Race” by Yello, but they lost many points in their free to “Interview with a Vampire” as they wobbled and stumbled on jumps and throws.

Canada’s Hope McLean and Trennt Michaud withdrew due to injury following the morning practice. McLean suffered an injury on a bad fall on a lift in practice on Monday. They stood in 13th place following the short program.