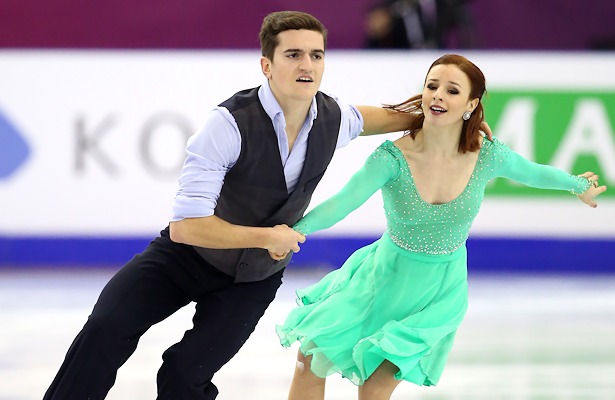 When ice dancers Marie-Jade Lauriault and Romain Le Gac teamed up during the summer of 2014, they not only found a new partnership on the ice, but in life as well. The Canadian and her French partner, who represent France, got married in December 2015, just after competing at the ISU Junior Grand Prix Final where they placed fifth.

The newly-wed couple then won the junior national title in February in Poitiers, France, before they headed to Debrecen, Hungary, for the 2016 World Junior Championships.

Third after the Short Dance, the team, which trains in Montreal, Canada, slipped to eighth overall after an error on the twizzles in the Free Dance. Nevertheless, they showed a lot of promise and are eager to move up to the senior ranks this upcoming season. While Lauriault and Le Gac did compete in a few senior-level events in the fall 0f 2014 (the JGP came too early for the team), they consider the upcoming 2016-17 season their first “true” senior season.

Back in July 2014, things didn’t look so good for the ice dancers. Le Gac had just split up with his partner Estelle Elizabeth and sat in Lyon, France, debating his options.

“I wanted more and better results and we just weren’t on the same wavelength anymore,” shared Le Gac, who turns 21 Tuesday. “Additionally, we had some personal problems and so she decided to stop. Suddenly I found myself alone.”

Le Gac called Romain Haguenauer, one of his coaches who had recently relocated to Montreal, Canada, who invited him to come to Canada.

At the same time, Lauriault was also without a partner, but not for long. Haguenauer, who became part of the coaching team alongside Marie-France Dubreuil and Patrice Lauzon, relayed to Lauriault that there may be a new partner for her.

After a week of try outs, the coaching team and skaters decided a partnership would work as they had gelled so quickly on and off the ice.

“Romain (Le Gac) first stayed with Francois-Xavier (Ouellette), a Canadian skater who trains with us,” said 19-year-old Lauriault. “When I saw that it worked well, I suggested that he could move in with me until he found an apartment.”

As a result, the skaters got to know each other faster than usual and bonded quickly – especially when they realized that they shared the same goals and values. They also had many things in common off the ice. At first, Lauriault and Le Gac were reluctant about having a private relationship.

“I said I never will go out with my partner and she thought the same way,” recalled Le Gac.

“Truly, in the beginning I had a barrier to overcome,” added Lauriault, “but love was stronger.”

Now that they are married, the team is hoping that Lauriault will receive her French citizenship in time to compete at the 2018 Olympic Winter Games. However, Le Gac stressed that theirs was not just a marriage on paper.

“It is sincere,” he emphasized.

Despite the new-found love, the skaters have sought from the beginning to separate their private and personal life as much as possible.

“We try to solve the problems we have on the ice at the rink,” she continued. “Once there is a problem, we address it right away so it’s done and we can move on. It is the same way for personal things. It works well not to mix the two. We spend so much time together that the hours flow together, but we need to keep it separate.”

Although both dancers are French-speaking, they had a few language barriers to overcome as the French in France and the French in Canada is not exactly the same, including the accents.

“We have the same words, but they don’t always have the same meaning,” explained Le Gac. “Sometimes we mean the same thing it’s said differently.”

The French-Canadian ice dancers use English names for moves and steps, although Le Gac was used to French expressions.

The husband-and-wife team is pleased with how this past season went overall. After worlds, they took part in the French Tour that went to different cities in the country during April.

“It was a new experience for us. The tour is quite intense and there is not much time to rest, though,” Lauriault shared.

The ISU Junior Grand Prix Logrono champions performed in ten shows in eight days, which did not leave much time for vacation.

“The tour was kind of our vacation,” said Lauriault. “As our senior year is coming up, we have a lot of work to do in order to be competitive. We’ll probably take a long weekend off during the summer, but not much more.”

The dancers resumed practice a few days after returning from the French tour, and have recently been busy working on their new programs.

“Our music choice hasn’t been finalized yet, but soon will be,” Lauriault offered. “We are still looking for a good concept for our senior year, and one that the audience and we can enjoy. For the short, we prefer a more groovy music, but it doesn’t have to be modern necessarily.”

Last season, the team skated to Beatles medley, and are now looking for something more “calm.”

“Our whole team—us, Marie-France (Dubreuil), Pascal Denis, Romain Haguenauer and Patrice (Lauzon) participate in selecting the music,” said Le Gac. “It is always team work that develops the concept of the programs, and the music is the starting point.”

During the summer, the Junior Grand Prix Finalists plan to focus on working on the “Midnight Blues,” the pattern dance for the upcoming season.

“We also want to refine our lifts and see what else we can add,” Le Gac shared. “Moreover, things to work on include making our skating look powerful and big.”

The duo wants to compete at the 2016 Québec Summer Championships in Pierrefonds, Canada, in August, as well as the French Master’s to kick off their season.

“The rest depends on whether we receive Grand Prix events or not and on the evolution of our programs,” Le Gac noted.

The main goal for the upcoming season is to find their place among the senior teams considering how high the international level is.

“It will be a nice challenge,” said Le Gac. “We also want to develop our personality as a couple in the direction that we have started to explore last year—meaning that we want to inspire our programs with humanity.”

The young dancers have enjoyed training alongside their team-mates and now two-time World champions Gabriella Papadakis and Guillaume Cizeron, and are looking forward to soon welcoming 2010 Olympic champions Tessa Virtue and Scott Moir into their practice group.

“Gaby (Papadakis) and Guillaume (Cizeron) have been in Montreal for almost two years now and it is a pleasure to train with them,” Lauriault said. “They always create a good mood and it is most of all motivating to see them always looking to better themselves. We couldn’t be in a better place right now. Team Montreal is a training group, yes, but most of all, it is a small family.”