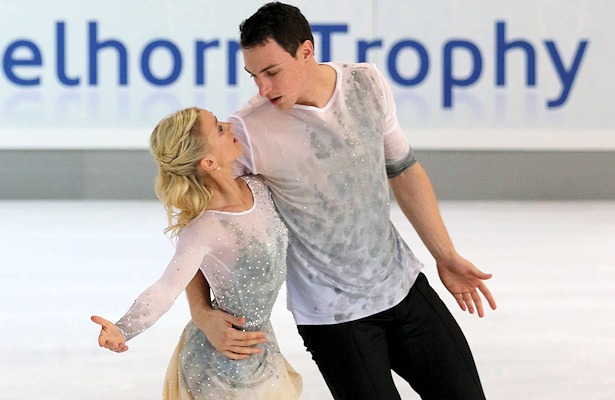 Bruno Massot lifts his partner Aljona Savchenko gently up as the last note of “Lighthouse” by Patrick Watson fades away. The pairs free skating at Nebelhorn Trophy is done, and the World bronze medalists have their first competition of the season under their belts, taking the gold medal at their home event in Oberstdorf, Germany, where they have been training since end of 2014.

While the sophomore team did well, there were still mistakes, most notably Savchenko’s fall on the throw triple Axel and Massot’s doubled jumps in the free skate. Nevertheless, the ambitious skaters smiled at the end.

“We are still satisfied, especially considering what happened before,” said Savchenko, referring to a bad fall on a throw triple Axel in practice three days before the event, as well as a toothache. “It is important for us to have done this competition, in order to get into it, to know how we are feeling in our programs and what we maybe need to change.”

In addition to the toothache, which resulted in a fever, Savchenko also hurt her back in the fall. Nonetheless, the Ukrainian-born skater is tough despite her delicate appearance, and fought her way through. The team decided to withdraw from Ondrej Nepela Memorial the week after in order to give her some time to heal. Originally, they had planned to do both as their Grand Prix events Rostelecom Cup in Moscow, Russia, and Trophee de France in Paris, France, are back to back as well.

The feedback the skaters and coach Alexander Koenig received for their programs, the fun short “That Man” by Caro Emerald and the romantic free to “Lighthouse,” was positive. The team went to Florida to have the programs choreographed by former ice dancer John Kerr, Silvia Fontana and John Zimmerman. Kerr also came to Oberstdorf in the summer to polish the programs.

“The free skating is much easier to skate than last year’s,” said Massot. “The music is much softer. We can take our time, and even though the choreography is harder than last year, we can breathe better.”

“I feel completely differently,” added Savchenko. “I love this program, the choreography, the costumes. It is something special and can be really magical.”

Indeed, it is a beautiful program. Elegant, fluid and building slowly, with the elements woven into the choreography.

The entertaining short program easily became a crowd favorite and the skaters performed it in shows during the summer.

“Right after Worlds we went to Florida to sit down with John Kerr, Silvia Fontana and John Zimmerman,” Savchenko offered. “They have great ideas. We had no clue what would suit us and we said we would let ourselves be surprised by what they suggest. When they played this music for us we said right away, ‘yes, that’s it’. This program is a lot of fun. It is something different. We are dancing and don’t think too much about the elements.”

The European silver medalists also showed off a new and unusual exit of the triple twist in the short where Massot catches his partner and whirls her around before setting her down to the ice. They created the original move playing around in practice.

Massot, 27, says for the most part, the throw triple Axel has been going well in practice.

“We also worked on the quad (twist), but not too much,” he divulged. “We want to do the throw Axel first. We’re also training the jump combination triple Salchow-triple Salchow, because you get more points for that than for a jump sequence, but in our first competitions we’re going to do a sequence.”

Seeing the huge triple twist Savchenko and Massot do, a quad seems like something they could do easily. However, they want to do it right.

“We don’t need to work on having more time in the air, there is enough of that,” explained coach Koenig, “but we need to work on starting the rotation earlier. This is something we can train on a triple twist as well. As soon as it is consistent and good enough, the quad is planned.”

“We’re doing the throw triple Axel first and the quads come maybe later,” Savchenko reiterated. “We wanted to do it this summer, but some things went wrong, many things went well and there was always something happening. So we’ll do it when we really need it.”

Savchenko was recently married to Englishman Liam Cross, whom she met in Oberstdorf playing poker with a group of friends. They got married on August 18, 2016 in the picturesque town of Fuessen.

“It was one of the most beautiful days of my life,” said the 32-year-old. “The weather was perfect; the family was there.”

Off the ice, Savchenko is preparing for her coaching license and had a practical exam just before Nebelhorn Trophy.

“I think I’ve got talent,” she said. “I enjoy coaching children, but I cannot do it too much on the side, because when I coach children, I give a 100 percent and after that I’m tired.”

Massot studies German in his spare time, and has a language test on January 14. “This will be harder than Europeans,” he joked. The Frenchman needs to pass a language test in order to be eligible for German citizenship, which he will need for the 2018 Olympic Games.

The German champions feel ready for the season.

“It is our first full season and it will seem long for us,” Massot summed up. “Although everything will happen fast, it is long time and we need to remain focused until Worlds. We are confident and we are ready for this big season.”