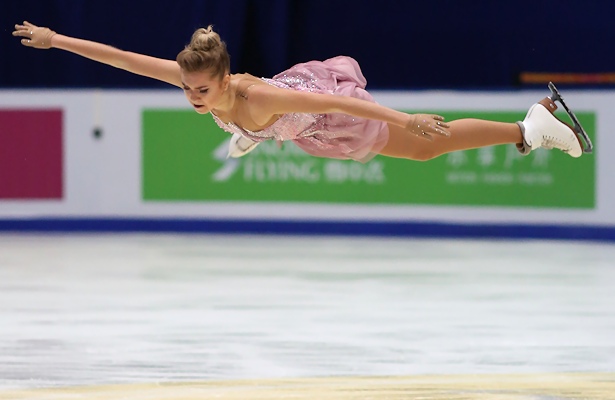 Russia’s Elena Radionova is back on track and bagged the gold medal in Beijing at 2016 Audi Cup of China, which also gets her into her fourth consecutive Grand Prix Final. Kaetlyn Osmond of Canada had won the short program, but slipped to second in the Ladies event on Saturday. Radionova’s teammate, Elizaveta Tuktamysheva, worked her way up from fourth to grab the bronze.

Radionova’s elegant and expressive performance to “Turandot” by Giacomo Puccini was highlighted by six triple jumps, including a triple Lutz-single loop-triple Salchow. However, she underrotated the triple toe in her opening jump combination with a triple Lutz and the triple flip was somewhat shaky. The 17-year-old from Moscow set a new season’s best of 135.15 points. She racked up 205.90 points to win the fourth Grand Prix gold medal of her career.

“My performance was not flawless today, but it was the best performance of the season, as for the jumps as well as for the skating overall,” Radionova said. “I am overwhelmed with positive emotions and just so happy to have achieved this result.”

Her strategy was to make her program harder since last season. “My coach and I already decided at the end of last season that I’ll do five triples in the second half. I am going to the rink every day and I work with my team and what you see is the result. Now I will take a little rest and then will move forward,” the European silver medalist said.

Osmond seemed on the way to gold in the 30 seconds of her dramatic program to “La Boheme,” pulling off a triple flip-triple toe combination and a double Axel-triple toe, but then she botched a triple Lutz, landing forward (downgraded), and also crashed on an underrotated triple loop and underrotated a triple Salchow. That was not enough to defend her lead and she came in second at 196.00 points.

“I started off really strong,” said the two-time Canadian champ. “It was the first time that I did those two jumps (combinations) together in competition. After that, I did two mistakes that were uncharacteristic for me. I know that is something I just have to work on leading into the next few competitions, hopefully keeping my focus a little bit longer.”

Nevertheless, with two silver medals she should be in the Grand Prix Final.

“If I make it to the Final, I’d obviously be super excited with the fact that I’ve never been there before,” said Osmond. “It’s a new competition for me. Overall, this year I’ve been really happy with how I’ve been skating, so my goal just leading into the next few competitions would be just to continue the way I’ve been training and just continue getting stronger and hopefully improve at the next competition.”

After Skate Canada, Tuktamysheva and her coaches decided to return to last year’s “Peer Gynt” program as the “Cleopatra” was not so well received. The 2015 World champion landed five clean triples, including a triple toe-triple toe combination, but she doubled her second Lutz. She was ranked second in the free skating with a season’s best score and pulled up from fourth to third place with 192.57 points.

“I made my free program more difficult,” the 2015 European Champion revealed. “For the first time, I tried two triple Lutzes in the second half. We are going towards the future step by step. I also wanted to do the triple Axel here, but I was sick after Skate Canada and didn’t have enough time to work on it. I plan on going to the competition in Zagreb in two week and I will try the triple Axel there.”

Japan’s Mai Mihara skated quite well to the “Cinderella” soundtrack by Patrick Doyle with five good triple jumps, but she popped a Lutz and stumbled on a triple loop. As a result, she slipped to fourth place. Her teammate Rika Hongo also made mistakes on two jumping passes, but still moved up from sixth to fifth.

USA’s Ashley Wagner did not have a good day. She underrotated six triples, only a triple flip was clean. The World silver medalist finished sixth, but still has a chance to make the Final depending on what happens next week at NHK Trophy.

Osmond won the short program with a confident performance of her program to the Edith Piaf songs “Sous le ciel de Paris” and “Milord,” hitting a triple flip-triple toe, triple Lutz and double Axel. Her jumps are powerful and high, so she gets good Grades of Execution (GOE) when landing them.

Radionova performed her short program with more confidence than in Moscow two weeks ago, but she underrotated the back end of her triple Lutz-triple toe.

Mihara came out strong in the short with another clean performance that included a triple Lutz-triple toe.