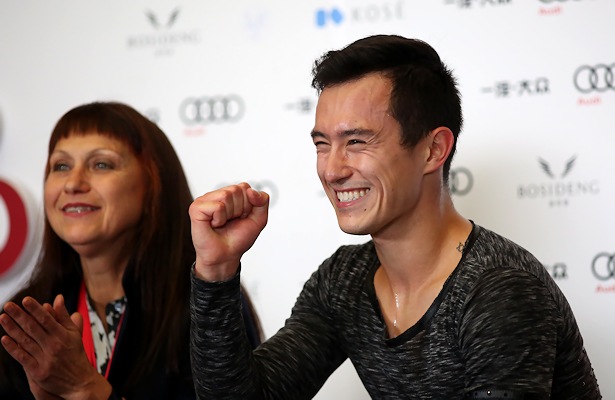 Three-time World Champion Patrick Chan of Canada rallied back from a faulty short program to claim his second gold on the Grand Prix circuit at Audi Cup of China in Beijing on Saturday. The silver went to China’s Boyang Jin, while Sergei Voronov of Russia clinched the bronze medal.

Chan had to skate right after Jin, the home-crowd favorite, and the ice was full of toys. Unfazed, the Olympic silver medalist pulled off a strong performance to “A Journey,” the music his teammate Eric Radford had composed, and proved that he is back in business.

Chan hit a quadruple-triple toe, quadruple toe, two triple Axels, as well as three more triples. He only missed the quadruple Salchow. The multiple Canadian champion earned a season’s best with 196.31 points and came from third place to win with 279.72 points. Winning wasn’t even his primary goal.

“This year is all about the process,” the reigning Four Continents champion said. “One thing I’ve learned since coming back to the competitive scene is that I really need to let go of the fact that I’m doing this for the results. That isn’t the right train of thought for what I’m trying to do, which is a hard thing to do. It is not easy to forget about results, but that was my approach today. I didn’t really expect to win my two Grand Prixs, because my goal was more to put out my quad Sal.”

“Quad king” Jin went for four quads – Lutz, Salchow and two toes and missed one toe that was also underrotated, but this was the only major error. The skater from Harbin lost to Chan by a little over a point.

“I did not feel pressure. I skated with my music and I got a season’s best in both programs,” said the World bronze medalist. “The result is the same as last year (when he also got silver), but I think that I am more mature compared to last year.”

Voronov turned in a near-perfect performance of his program to “Exogenesis Symphony” by Muse. His quadruple-triple toe combination and two triple Axels were especially strong, however, he tripled his second planned quad toe and added another triple toe for it, which was one too many and didn’t count. The two-time Russian champion edged out USA’s Max Aaron for the bronze by just 1.02 points.

“Overall, I did well in the competition and I am glad to be in the top three,” said Voronov. “I am just a little upset that I not only didn’t go for the second quad, but that I did an extra triple toe. I really should not do these kinds of stupid mistakes anymore. It almost cost me the medal.”

Aaron landed two quad Salchows in his “Lion King” program to finish fourth. Han Yan of China struggled with the quad toe and a triple Axel and placed fifth ahead of the clean, but quad-less Alexander Petrov of Russia.

Israel’s Daniel Samohin surprisingly was second in the short, but it was probably too much pressure for the skater as he faded to eighth after numerous errors.

In the short, Jin was one of the few men to skate clean and he had the most difficult content with a quad Lutz-triple toe and a solo quadruple toe. Samohin crashed on his quad toe, but landed a wobbly quad Salchow-triple toe which was enough to finish second in this segment.

Chan stood in third place after the short as he made errors on all three jumping passes – he touched down with his hand on the triple toe in his quad-triple toe combo, stepped out of the triple Axel and finally, the biggest mistake, doubling the Lutz.

“I think I just lost my focus a bit going into the triple Lutz. In the short program, those little mistakes become very big mistakes. You do lose a lot of points,” Chan admitted. “I call myself lucky. Some other skaters also made mistakes and I was able to stay in the top three.”