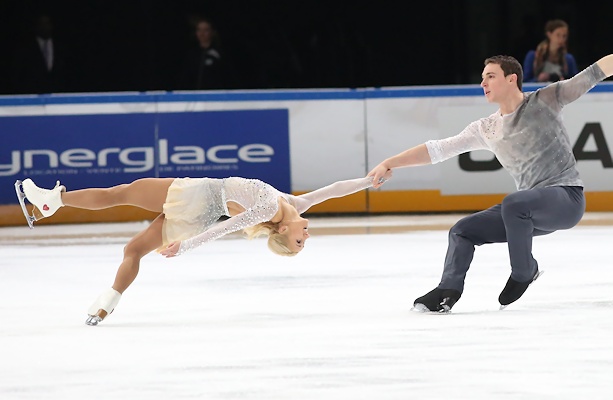 Aljona Savchenko and Bruno Massot of Germany followed up on their victory from Rostelecom Cup last week by winning the 2016 Trophee de France Saturday in Paris, France. Russia’s Evgenia Tarasova and Vladimir Morozov secured the silver medal and kept their chances for a spot in the Grand Prix Final. The bronze went to Vanessa James and Morgan Cipres of France, who came from fourth place in the short program.

However, the European silver medalists were far from being perfect as Savchenko sprained her ankle when she crashed on the throw triple Axel.

Savchenko and Massot opened their romantic program to “Lighthouse” by Patrick Watson with their trademark huge triple twist, but then Massot made errors on the solo jumps – he touched down on the triple Salchow and doubled the toe. Unfortunately, Savchenko sprained her right ankle when she fell on the throw triple Axel. They scored a total of 210.59.

“I felt a sharp pain, but I tried to continue (the best I could),” said Savchenko. “I just had to.”

While the pair elements, such as lifts and spins, were strong, the team decided not to go for the quad throw Salchow under these circumstances. Nevertheless, Savchenko stepped out of the landing of a triple throw Salchow. The usually tough skater was in tears in the mixed zone, barely able to speak. A bit later, she felt better, but was limping at the victory ceremony and had to withdraw from the exhibition gala.

“We need to check out the injury at home to find out whether the injury is serious or if it is only a strain that will be okay after a few days,” coach Alexander Koenig said.

Massot looked very nervous in the long program, but he pointed out that he enjoyed skating in France again.

“I think we got a very good welcome here,” said the French-born skater. “It was amazing to skate here. It was really hard to do two competitions in a row, physically, but more so in the head. I did bad mistakes in the beginning of the program, but I came back and we did good lifts.”

The World bronze medalists had a narrow lead (1.31 points) over Tarasova and Morozov in the short program. The side by side triple Salchow worked, but Savchenko stumbled on the throw triple Axel and had to deal with a costume malfunction when her dress opened during the lift.

“I always have a problem with something,” she sighed. “I was surprised when the zipper broke and I was just hoping that the dress would not come off entirely.”

Tarasova and Morozov turned in a clean short except for her slightly two-footed landing of the throw triple loop. The European bronze medalists could have seized their chance to win in the free skating, but although they landed a quadruple twist and made only one major mistake – Morozov doubled the toe – overall they looked a bit rough around the edges in their routine to “Music Was My First Love” by John Miles. However, they scored a new personal total best of 206.94.

“I can’t say that this was really good,” Morozov said. “There were mistakes, but overall we’re happy with the result. I hope we’ll make it to the Grand Prix Final. That was our primary goal here.”

“The short program we skated better here than at Skate America and we got a personal best,” he added. “The free we also skated better, but it wasn’t yet ideal.”

James and Cipres, who stood in fourth place following the short program, moved up (198.58) with a strong long to “The Sound of Silence” that included a triple twist, side by side triple toe-double toe and triple Salchow. The team also produced a throw quad Salchow, although James two-footed the landing. She also stumbled on the landing of a throw triple flip that she does with both arms over her head.

“We are very happy with our performance today,” Cipres commented. “It was hard for us to go back to skating after Skate America, which was a big disappointment. We had to fight and to work hard every day and today we fight on the ice. I am happy to be on the podium here in Paris and to be back here.”

“The quad is not easy and we’re taking risks and when girls fall, it is hard,” he added. “But we need to make the sport better.”

Natalia Zabiiako and Alexander Enbert of Russia were ranked third with a good short, but in the free he fell on the side by side triple toe and the Russians only went for a double Salchow. They also looked a bit slow in their program to “Cry Me a River.” They dropped to fourth at 192.56 points.