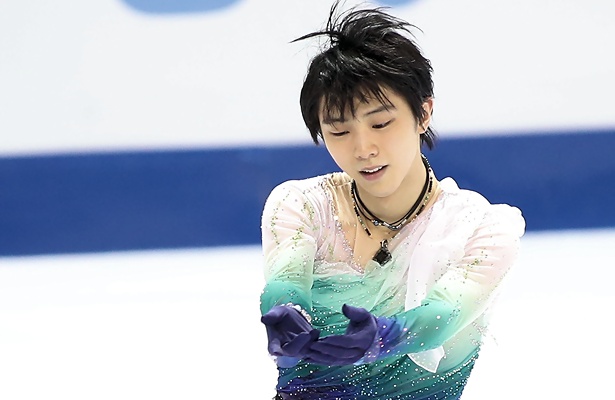 Hanyu was last to skate in the short program on Thursday and his routine to “Let’s Go Crazy” was one of the highlights of the day. The student of Brian Order landed a nearly clean quad loop, nailed a quad Salchow-triple toe loop combination and triple Axel, picking up a level four for all his non-jumping elements along the way. The 2016 Olympic champion truly set the audience on fire with his performance.

“Actually, I have never connected to an audience like this since I was born or since I started skating, but this program feels like a concert, like it’s live,” he said afterwards. “I want to be their rock star. I believe this program cannot be completed without the audience, so that is actually my goal: to complete this program with the audience.”

His long program to “Hope and Legacy” by Joe Hisaishi was another story, however. The 22-year-old started strong with perfectly clean quad loop, followed by an equally flawless quad Salchow, but then fell on the second quad Salchow attempt, had an unsecure landing on a quad toe loop, and popped his final triple Lutz into a single. He was only third in the long program, but his advantage after the short program allowed him to defend his title.

“I feel very disappointed with my long program, but the result is good,” he confessed. “I think this is figure skating. I’m proud of my short program and I am going to keep on working hard on my long program. I was happy when I skated my program. I love both programs this year because I feel really connected to the audience and I am able to keep smiling in these programs. So I am happy with the skate, but I feel a little disappointed, especially with the second Salchow, the first loop and everything. I have two triple Axels in the second half. I want to be challenged. I feel good and in the next year, I will be good, so I am not worried about it.”

“I got a lot of experience [so far], especially with the loop,” Hanyu said about his plans for the second half of the season. “I think that makes me better. I think after the first half of the season I don’t feel too bad. I want to keep being challenged in my program and I think it will be good. I will keep working hard.”

Chen pulled up from the fifth place after the short program to win a silver thanks to his outstanding performance to “Prince Igor,” which was the best of the night on Saturday. The student of Rafael Arutyunyan did not put a foot wrong in the entire routine, nailing a quad Lutz, quad flip, two quad toe loops, and a triple Axel. Artistically, the Grand Prix Final debutant was not on the same level as most of the field, but his outstanding technical proficiency earned him a stunning 113.13 points for the Total Elements Score, allowing him to win the first medal at a major senior competition in his career.

“I really happy with the result of today,” said the U.S. bronze medalist. “It came as a surprise to me. I wasn’t really expecting to be able to even come out with a medal here. I had a little bit of a disappointing short program, but I think that helped me settle my nerves. It gave me a little bit of experience which helped today. It was my first clean long program since last season, so I’m really happy with the result.”

“The competitions help you to have time to put new jumps in and get used to the new jumps, so that’s good for me,” the 17-year-old said about his season so far. “To have the opportunity to compete at all these events is great as I get the opportunity to put those two big jumps out there. The first half of the season has been pretty packed. I’ve had a competition pretty much every weekend, so it’s been good to have a competition and then really quick recover for the next one. That is something I can carry on for the next half of the season.

“I need to make sure I’m healthy for the whole season,” Chen summed up, adding that his next step is to attack nationals.

Uno opened the event with an electrifying performance to “Buenos Aires Hora Cero” and “Balada para un loco” by Astor Piazzolla, landing a quad flip and two quad toe loops. However, he did not add a triple toe loop to the triple Axel, which he nailed exactly on the music accent, and ended up having only two combination jumps out of the allowed three. This oversight cost the student of Machiko Yamada and Mihoko Higuchi a silver medal.

“I’m pretty happy with my free program,” said the two-time Japanese national silver medalist. “I think I skated quite well, yet it was not perfect. Also in my short program, I made a mistake which cost me a lot, so I have homework and it’s something I need to fix in the future.”

The mistake he refers to was a painful looking fall on a downgraded quad toe-loop attempt, but fortunately, the skater who limped off the ice after the program, looked fully recovered at the time for the long.

“I can say I’m not quite satisfied with my result,” Uno added. “Especially in the short program. Obviously I made a big mistake. Last season and this season my success rate in the short program is not really good, so that’s something I’m concerned about. About the scores, I received pretty much what I expected given the mistakes I made.”

Two time World champion Javier Fernandez of Spain had to settle for the fourth place in Marseille. The student of Brian Orser missed a quad Salchow and triple Axel in both the short and the long program. He earned 268.77 total, a good twenty points below the medalists.

“It wasn’t great. I had many mistakes and was slow in general,” admitted the Spaniard. “Maybe it was my fault a bit. After my two Grand Prix (events), I was doing way too many things and perhaps didn’t prepare enough. Here, I didn’t really get used to the ice. It was a little messy in general. It was hard for me mentally to stay positive. Going into the (planned quad, which he turned into a triple) toeloop, I felt negative, unsure if I could do it.”

Canada’s Patrick Chan slipped from second to fifth place after an error-ridden performance which had a total of four deductions. The student of Marina Zueva fell on his opening quad toe loop and the subsequent triple Axel, recovered to land a quad Salchow, but fell on the second triple Axel as well. He earned 266.75 points.

“Skating is sometimes unpredictable,” he lamented afterwards. “You can only do so much. It’s tough. But this is where the real test is to remind myself what went right. To get the quad Salchow out was amazing, especially after two mistakes. I didn’t even do that in training. That just shows the strength of the training I have done. I’m in the game now with two different quads, so there are a lot of good things I can’t forget. But then there are some things that you can’t mimic in training, like I had to wait for five other skaters before me, but I’m remembering the good.”

The good part of this event should certainly include the flawless performance in the short program to The Beatles medley, which featured only one quad and the skater plans to keep it this way.

“I am waiting [until next season to attempt the second quad in the short],” explained the three-time World champion. “I haven’t put any thought into it just because the Grand Prix season goes by very quickly and there is not much time between events, so I have not really thought about it. But I think logically it is the next step to put another quad in the short program because as the long program is set up, currently I do quad, Axel and then [quad] Salchow, so it is a possibility to put it in the short program too.”

USA’s Adam Rippon delivered a spectacular short program to “Let Me Think About It,” but struggled in the long. Without any clean quads in either programs, the U.S. champion finished sixth with 233.10 points.

“Of course it wasn’t the performance I wanted to have, but I’m really happy to be here,” he said at the end of the competition. “It was a huge accomplishment to make it to the Grand Prix Final. I wasn’t really expecting to go, so I’m really excited and grateful to be here. I’m just going to take this experience and learn from it. It wasn’t the best competitive experience I’ve had, but it wasn’t the worst either. When this happens, I just go home and analyze what went wrong and learn from it. I think I just got a little ahead of myself and then made mistakes. When I skate, I feel lucky and fortunate and free.”