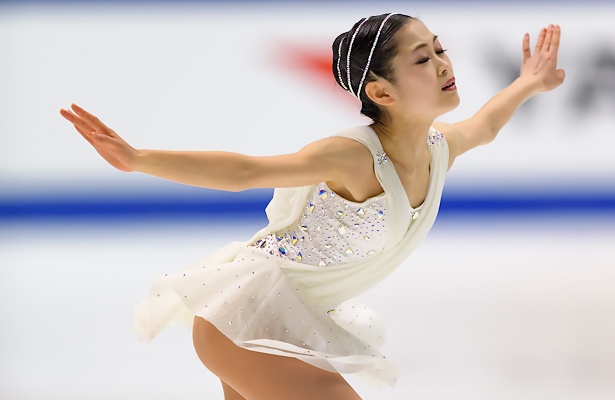 Having captured the national title for the last two years, Satoko Miyahara, the reigning Grand Prix Final silver medalist, did not succumb to the pressure of defending her title. The 2015 World silver medalist topped the ladies field in Japan once again, while two-time World Junior bronze medalist, Wakaba Higuchi, and this year’s Nebelhorn Trophy champion, Mai Mihara, finished in second and third place, respectively.

Sitting in first place after the short program with a sizable lead, Miyahara showcased her athleticism and poise under pressure in front of the home crowd in Osaka. The current Four Continents champion opened her free program with a triple loop, but stepped out of her triple Lutz-triple toe loop combination, a rare mistake for the consistent skater. She went on to land four more triples, including an impressive double Axel-triple toe loop combination in the second half of the program. The judges awarded 138.38 points for Miyahara’s efforts in the free skate, and her combined total of 214.87 had the former World Silver medalist sit comfortably in first place.

“I was hoping to showcase a cleaner program today,” the 18-year old skater said, “but I was relieved that the competition is over. I am happy that I captured my third straight national title.”

When asked about the pressure of defending the national title, the three-time Japanese champion was glad that she had the mental strength it took to accomplish such feat. “It is an important part of the sport to win when you hope to win. I want to be a mentally tough person,” said Miyahara.

The three-time Japanese national champion struggled with under-rotations earlier this year at her Grand Prix assignments, where she placed second and third. She hopes to address the quality of her jumping passes going into the second half of the season.

“I need to make sure I can fully rotate my triples at all times,” said the 18-year-old from Kyoto. “I am working on my consistency so that I can do my best, even though I am not feeling 100 percent physically.”

Higuchi, a first-year senior, solidified herself as one of Japan’s top ladies competitors with a second silver medal at nationals. The student from Tokyo backed up her clean short program with a strong free skate, highlighted by two triple Lutz-triple toe loop combinations. The only major mistake in her free program was a fall on the triple Salchow, which she also under-rotated. Despite the fall and an edge call on her triple flip, the skater moved up from third place after the short program to second place overall (199.49).

“Today’s free skate was my best performance of the season so far,” said the 15-year old, “but with the fall on the triple Salchow and my step sequence, I can do better and show more confidence.” Reflecting on her performances at this year’s nationals, the two-time Japanese silver medalist claimed that concentration was key to her success. “I was very focused throughout my performance in the free skate, so I felt that the program was over in a split second.”

Mihara, who burst onto the senior circuit this year with her win at Nebelhorn Trophy and her third-place finish at Skate America, had another breakthrough at Japanese nationals — an event which didn’t qualify for last year after a disappointing outing at junior nationals. The 17-year-old from Kobe opened her free skate with an impressive triple Lutz-triple toe loop combination and went on to execute another five clean triples. Mihara earned 132.26 in the free skate, and finished in third place overall with 198.17 points.

“This competition was a great learning experience for me,” the first-year senior said. “I was not completely satisfied with my performances here, but I realized that I need to address the weaknesses in my skating to become a stronger skater.”

The three medalists at Japanese nationals this year, Miyahara, Higuchi and Mihara, will represent Japan at the upcoming World Championships in Helsinki, Finland. Three-time World champion Mao Asada finished in 12th place overall, and is not scheduled to compete in the second half of the season.