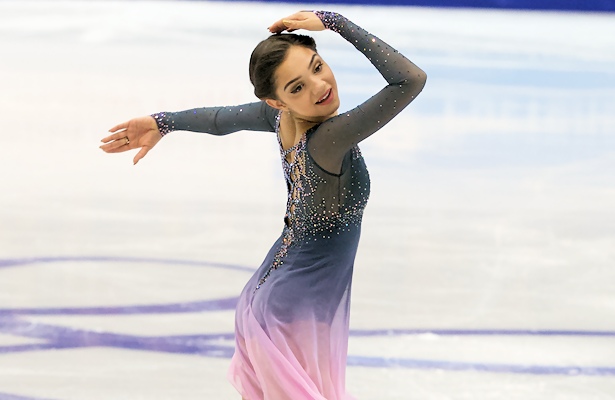 Medvedeva was in class of her own on both days of the competition. The 17-year-old approached all her jumps without the slightest hesitation, and towards the end of her long program performance, executed a triple Salchow – triple toe loop – triple toe loop combination, in which the third jump received zero points as it was already the third triple toe loop in her program and she had already done one three-jump combination.

“I know, I know,” she said on the press conference. “I think I managed to surprise even my coach; nobody expected me to go for it. But I know that the rules have been changed this year and they allow you to do more triple toe loops. Previously, the entire element would have received zero points, but now only the third triple toe would be discarded and I thought since I can do it, why not try?”

“It’s a step forward for me,” she added, “both technically and in terms of stamina. I have never done it before and it’s very hard to do 3-3-3 combination as the next to last jump in the program.”

The skater, whom many expected to falter under pressure of defending her titles, keeps skating strong and says that she is unfazed by the expectations.

When asked about her strongest qualities, she said it’s the ability to control her emotions.

Zagitova, who debuted at the Junior Grand Prix Series this year after an unimpressive 9th-place finish at the Russian Junior nationals last year, continues to impress. The student of Eteri Tutberidze got the highest basic value in both program, mostly thanks to the fact that she attempts all her jumps in the second half of the program. The list of the jumps included a triple Lutz – triple loop combination and a full set of other triple jumps, including a triple flip – double loop – double toe loop combination, which was perfectly timed to the musical accents in her “Don Quixote” long program.

“Frankly, I did not expect even to be in the top five at Senior nationals,” she confessed at the press conference. “I am very happy, but also slightly disappointed that I won’t be able to participate in the European Championships.”

However, when asked about triple jumps, the 3-3-3 combinations like her teammate, she replied with absolutely confident, “Of course,” as if it is the most natural thing.

“I even do 3-3-3-3 sometimes,” she added. “Even though the rules do not permit such combinations.”

“And a triple Lutz – triple loop combination in the second half,” chimed in Medvedeva.

Now the 14-year-old is looking forward to the New Year holidays.

“I will go home for four days,” said the native of Izhevsk. “I am very happy that I will be able to celebrate New Years with my family. Then I start to prepare for the junior nationals.”

Sotskova, for whom it is the first Senior season, achieved her goals and qualified for the national team with two strong performances in Chelyabinsk. Her only mistake was to single a double Axel in combination with a double toe loop in the second half of her long program.

“I worked hard and I had certain goals for this championships,” said the student of Elena Byuanova. “I have managed to accomplish them, and while I am not entirely happy with the performance, what is done is done.”

Regarding her mistake and emotional reaction to her performance, the 16-year-old explained that she was very disappointed with her mistake.

“It’s better to fall on a jump than to pop it, I was always told,” she said, “but what is done is done. You cannot change it, unfortunately. However, I have to say that I cry after almost every competition. It’s just a release of pent up emotions. It does not mean that I am unhappy.”

“It’s my first year in Seniors,” she added. “I feel like every time I have to prove that the last time was not a fluke.”

According to her, her strongest point is the ability to remain calm in any circumstances.

The skater said that she found the strong competition at home to be very motivating.

“When you know that there is a whole generation coming up who does the same thing as you or even better things, it motivates you to think about new things you can add to your own skating to stay ahead,” said the World Junior silver medalist.

Anna Pogorilaya, who won the bronze at the recent Grand Prix Final in Marseille, had to settle for a fourth-place finish at home with 215.62 points in total. The student of Anna Tsareva sustained a knee injury at practice and was somewhat cautious in her execution, even though it looked more like an attempt to avoid making mistakes due to being carried away than a concern over an injury. Two of her jumps were under-rotated, however: a triple toe loop in a triple Lutz – triple toe loop combination in the short, and a triple Salchow in a triple Lutz – half loop – triple Salchow combination in the long. Otherwise, her tango and Mychael Nyman medley were one of the most mature and expressive performances and were very well received by the crowd.

The skater was unhappy with the her performance.

“It was not an A-game,” said the 18-year-old, “more like a D game. I made my coaches unduly nervous. Emotionally, it was one of my best performances, but the jumps could have been better.”

“Still, it was a pleasure to skate here,” she added. “The support of the crowd was incredible. My knee did not bother me much.”

Fellow Grand Prix finalist Elena Radionova finished fifth with 209.24 points. The student of Inna Goncharenko also under-rotated the second part of her triple Lutz – triple toe loop combination in the short, and missed a triple loop in her long. Despite completing six other triple jumps, the two-time European silver medalist did not qualify for the national team for the continental championships.

Stanislava Konstantinova was seventh in both programs, but a combined score of 200.19 was enough for the sixth place finish. This was unexpected as the skater defeated more decorated skaters, including 2017 Junior Grand Prix Final champion Anastasiia Gubanova and former World champion, Elizaveta Tuktamysheva.

Gubanova popped a planned triple loop in the short program into a single to finish seventh overall (197.26), while Tuktamysheva struggled with her jumps in the long program to finish eighth (194.52).