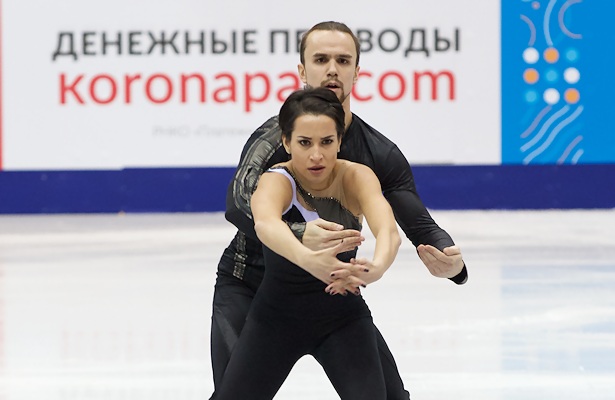 Ksenia Stolbova and Fedor Klimov, who withdrew from the autumn Grand Prix events with an injury, came back strong to win their third national title. 2016-17 Grand Prix Final champions Evgenia Tarasova and Vladimir Morozov had to settle for silver, while Natalia Zabiako and Alexander Enbert won the bronze. All three teams train in Moscow in Nina Mozer’s group.

For Stolbova and Klimov, the comeback was as not as smooth as they could have hoped it to be. The team made mistakes on a level two triple twist in both programs and the landings of both throws in the free program was flawed. However, the 2014 Olympic silver medalists lost none of their trademark intensity, which was especially evident in their sinister long program to the music by Rene Aubry.

Their choice of short program music, “Claire de Lune” by Debussy, while fairly traditional for pair skating, was a novelty for the team.

“It’s our choice,” said Stolbova. “I always dreamed about skating to ‘Claire de Lune.’ I have wanted it for a very long time, but I think we have finally matured enough to do it. We have never skated to classical music before, so everyone was in favour of the idea. As soon we started to work on this program, we realized that it suits us well. The choreography is done by Yuri Smekalov [and] we enjoyed working with him.”

“We cannot say that we are happy with our performance,” said Klimov after the event, “but we got the job done. We qualified for the main events of the season. Now we can prepare for them. We finally got to skate our new programs in front of the public, which is good, and we kept going despite the mistakes.”

The three-time European medalists had only three weeks to prepare for the national championships, and they attribute at least some of their mistakes to this fact.

“We were very disappointed with the mistake on the twist today,” explained Klimov. “We did a very good one in practice in the morning, but it has always been an ‘on’ and ‘off’ element for us. I guess we needed at least one more week of practice to stabilize it. It might have been nerves or it simply did not work out. It was much easier to skate afterwards, though.”

The winners of the 2016-17 Grand Prix Final claim the long break from the competition did not affect their overall performance.

“I think media is paying too much attention to it,” said Klimov after the end of the competition. “I was quite startled when I was asked about it after the short program. I never thought about it. After all, we have been skating for almost all our lives. One would think we know how to do it. It’s the same story with being number one in your country. We are always asked if it puts additional pressure on us, and eventually you could not help but wonder.”

“Our main problem was not an eight-month break from the competition,” he continued, “but the fact that we only had three weeks to prepare. I think there is too much hype about the break and it affected everyone, even the judges.”

Their plans for the future are very simple: more practice.

“We skated our programs,” said Klimov. “We learned what we have to add and what we have to remove. Our goal before the European championships is to recover all our elements, especially jumps and the twist.”

Tarasova and Morozov delivered a flawless and confident short program (80.04) in which every element was spot on, but their performance in the long was more uneven and lacked the complexity and conviction of the leaders (139.15). They opened their routine to John Miles music with a slightly flawed level three quad twist, but then Morozov doubled the planned triple Salchow and stumbled out of the triple toe loop – double toe loop – double toe loop combination. In addition, their final lift was shaky and received only level two. They earned 219.19 points in total.

“Today it was a workman-like performance,” said Tarasova about their long. “We made mistakes on the jumps and lost points because of it, but we have also accomplished our goals of qualifying for the European and World championships.”

The team said that they were not affected by the lack of time between the Grand Prix Final and nationals.

“We trained really hard before the Grand Prix Final,” explained Tarasova. “I guess it helped and we had enough strength left to go through the Russian national championships. Nina Mikhailovna devised a plan for the week between the competitions. We stuck to it and we were able to maintain the shape we have been in for the Grand Prix Final.”

Zabiako and Enbert finished distant third with 201.91 points in total. The Grand Prix finalists were smooth, but not particularly expressive in their lyrical routines and made mistakes on jumping passes in the long.

“Not everything went as planned,” admitted Enbert afterwards, “but we are happy that we were able to add a triple Salchow to our program. It was slightly flawed, but we showed that we can do it. We did good lifts. We made a mistake on a jump, it’s a pity, but such things do happen. It’s not something critical which needs to be addressed immediately. We will pay more attention to it in the future.”

They also claim that they were not affected by the lack of downtime.

“We already had been in this position this year, with no break between the competitions,” explained Enbert. “We knew how to plan and to prepare for it. We knew what we can and cannot accomplish in such a short time. I wouldn’t say it was very difficult for us to prepare for nationals. Overall, it went well and we came here in an excellent shape and ready to compete.”

Kristina Astakhova and Alexey Rogonov went for side by side triple loops in their free program, but the jump was under-rotated and Astakhova later doubled the planned triple Salchow. After the initial mistakes, the students of Artur Dmitriev skated well and their program, which builds on the theme of a mechanical doll coming to life, was one of the highlights of the event. The Muscovites picked up 198.79 points in total.

Yuko Kavaguti and Alexander Smirnov delivered two touching, but flawed programs to finish fifth with 191.42 points. The students of Tamara Moskvina, who missed the second half of the last season due to Kavaguti’s injury, had an unexpected fall on a triple twist in the short program and struggled with jumping passes in the long.

“I think we did well,” said Smirnov. “I think for our age and list of injuries, it was a successful performance. It has been less than a year since Yuko sustained a very serious injury which normally takes a year to recover from, but she is already competing at the Russian nationals.”

Tamara Moskvina also praised her students for persistence and determination. “They could have easily retired after the injury. It was really serious, but they recovered from this injury and did their best here. It’s an outstanding example for all people who encounter difficulties in their life and for all other students in my group.”

The list of these students include, among others, Alexandra Boikova and Dmitrii Kozlovskii, who finished sixth with 179.01 points, and had a clean long program performance which featured two different triple jumps.