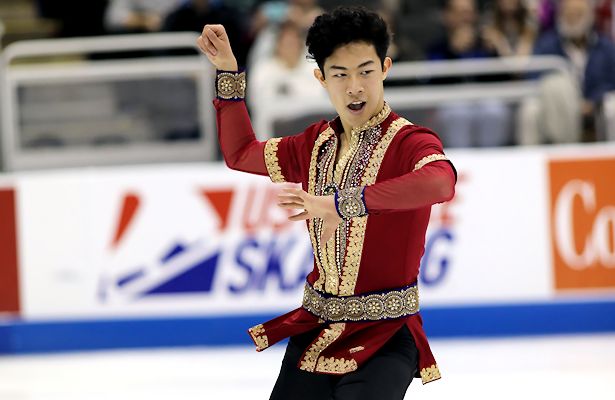 Nathan Chen became the youngest man since 1966 to win a U.S. men’s title at the 2017 U.S. Figure Skating Championships after a technically-packed routine. Vincent Zhou and Jason Brown both moved up one spot for the silver and bronze, respectively.

Chen is coming off a hip injury he sustained last year during the Smucker’s Skating Spectacular at 2016 U.S. Championships, and appreciates Brown’s dilemma (stress fracture). It was a long road for Chen as well.

“I definitely have to commend Jason [Brown] fighting through his [leg] injury,” he said. “I know how hard it is to push through an injury like that at a big event like nationals.  It took me about six months before I was back to relatively normal training, back to normal jumps, back to getting programs together. After that, things started picking up really, really, fast and I’m really lucky that I had the resources that I had at the Olympic Training Center to get the rehab that I needed to get, even at the UCSD to have the surgery. Like there’s just these resources I didn’t believe I would have had, and without them, it would have been really hard for me. With everything, it came back really fast and it was relatively easy after I got back on the ice.”

“It was amazing!” he said. “That’s something I’ve been training for and working toward. I didn’t really want to put it out there just yet since it’s been not so consistent in practice, but it was something I’m really proud of. The U.S. is back on the map on the world stage. We’ve kind of not had the results that we should have had over the past few years. I think that with us three (medalists, Vincent Zhou and Jason Brown), we’ll push that, push the U.S. back on to where they should be, and I’m really happy about that.”

The fearless skater also produced five triples, racking up additional points for strong spins and footwork. He earned an instant standing ovation and scored a record 212.08 points for first place in the long and overall (318.47).

When asked if he could win the Olympic gold in 2018, Chen responded: “I believe it’s possible. It’s still in the distance for me and there’s so much room that I have to improve to make myself at that level, but I think it’s definitely possible.”

“Raf has been expecting this kind of result for many, many years,” said the teen when asked about his coach Rafael Arutyunyan. “Even when I first started working with him. He brought me through fundamentals that I didn’t really have when I was with my older coaches in Salt Lake City. It was like every single coaching change that I’ve made … I mean I really have to thank all the coaches that I’ve worked with that pushed me to the next level.”

“Raf is kind of like the ultimate coach,” he continued. “I’ve been working with him since I was like 10 years old; I was going back and forth from Salt Lake City to California. I officially moved over there when I was like 13. He’s definitely helped me mature over the past few years and we’ve really formed a close bond. I can totally understand his mood and I can adjust my mood to his mood. We work really well together. Honestly, after not working with him for a few months while I was in Michigan, it definitely helped clean up our relationship from the past season. We’re stronger than ever.”

“How I’ve progressed as a younger skater is as soon as I land a new jump, I throw it in the program and work it from there (and) try to gain the consistency in the competition,” said Chen, when asked how he approaches his program. “I think that’s the same mindset that I’ve had going into these past few competitions with these big jumps. There really is no end-point. You just keep on adding in new stuff and trying new things and try to gain confidence with these big jumps.”

Zhou was the last man to take the ice, showing quiet determination after Chen left the ice. The 16-year-old stepped out of his opening quad Lutz, but landed the quad Salchow-triple toe and a triple Axel-double toe. His “Casablanca” routine also featured another clean quad Salchow, as well as a total of seven triple jumps. The teen received a level four on all three spins, as well his straightline steps, and finished in second place in the long (175.18) and overall (263.03).

“Tonight, went a lot better, or I ended up a lot higher than I thought I would coming into this competition,” said Zhou. “I didn’t even expect to be on the podium to be honest. I just tried to set some modest expectations for myself. This week in practice, I trained well, and tonight I just went out there and I feel like I delivered pretty well. It wasn’t my best program, but there’s always room to grow and to go back and start working now.”

“I’m still kind of in shock that I got second,” said Zhou of winning silver. “I was just trying to be modest with myself, but after how this week has progressed – I’ve been practicing really well – that program was worse than my practices. I’m kind of surprised at the score I received. I can’t really complain much. Eighth last year with two OK performances to being second this year with a score higher than I would have ever imagined that I would get, I’m really proud of that. And honestly, out there, I thought about having fun. I was confident going into my jumps. Some little mishaps occurred, but overall, I’m pleased how I did, not just the results but also practices. It hasn’t been easy at all.”

Zhou also overcame injury when he tore a meniscus in his right knee, forcing him to sit out the entire 2014-15 season.

“In the beginning of the season I had a string of competitions, and I had no time to really do proper recovery,” he recalled. “I was kind of struggling. Then after the Golden Spin of Zagreb, I went to Colorado to the Olympic Training Center and, like Nathan, I used the resources there and they helped me recover and progress. I had a very uphill slope or a very fast rate that I didn’t think was possible. At one point, I was really downcast because I didn’t think I would be able to recover. I was just kind of dealing with it the whole season and it wasn’t getting better. But I’m fortunate to have such an amazing team to help me recover and grow and get back to my old self and beyond.”

Dealing with a stress fracture, Brown had the lowest planned content of the top men.

“I really tried to take it one step at a time and not overthink it too much,” said Brown. “Attack with the same integrity that I do when I’m fully trained and at the same time, having kind of mental down times in the program where I can slow it down and refocus and really focus step by step. Right now, I can’t go in based off of feel. I’m not trained enough to go based off of feel. So, she’s [Kori Ade] like, ‘Act like you’re an engineer.’ You have to just focus on each element, each part of the jump and that’s what I really try to do.”

The 2015 U.S. national champion landed six clean triples in his routine to music from The Piano. With the audience behind him, he showed high level spins and footwork, earning positive GoEs. The only error was in the last jumping pass where he stepped out the triple Lutz (meant to be a combination). The 22-year-old scored the highest program component score (92.48), placing third in the long (175.00) and overall (254.23).

“I’m really pleased with what I put out today,” said Brown. “It’s been a tough week. I’ve been pushing through and I’m really proud of that. Injuries are really kind of big eye-opening experiences to go through. I think you learn so much from every experience along the way. You learn about yourself, you learn about perseverance and mental toughness. I think that’s something that I have been able to take into performances and into the season. You know where you started, you know how far you’ve come. You have a great background of people helping you out along the way and through that. You kind of feel that support system along the way and they are there fighting for you the whole way. You are there pushing yourself, so I think every injury that I’ve gone through I’ve learned something from it, I’ve grown from it and it’s launched me to do better things and push myself further than I thought, and I hope this one will do the same.”

“I feel like I learn so much more from performances like these today, where you have to fight through adversity, you have to push beyond what you think you are capable of doing,” he summed up. “I think that’s what makes this performance and the way I feel about it so strong and super, super excited that I was able to put something commendable out there. I think moving forward, it’s just another level to what I know what I’m capable of doing.”

Grant Hochstein stepped out of his opening quad toe in his dramatic routine to Pagliacci, but came back to land a triple Axel-double toe and quad toe-double toe. He had a few minor errors on other jumps, but otherwise showed good spins and footwork, earning 169.21 for a fourth-place finish in the long and overall (248.31).

“I’m very pleased with my skate,” said Hochstein. “I’ve put myself exactly where I need for next season. I’m working hard. I know the Grand Prix season didn’t go that well, but I’m proud of the work I did to get back to here and we’ll see what happens the rest of the season.”

Last April, the 26-year-old got engaged to fellow skater Caroline Zhang, who finished fifth in the ladies’ discipline.

Alexander Johnson, who stood in ninth after the short, put out a solid routine which featured six triple jumps. He showed good speed in his well-choreographed routine to “In Your Eyes,,” which featured high level spins and footwork. He placed fifth in the long (158.20) and moved up to sixth overall (233.39).

Ross Miner, who stood in second after the short, struggled with jumps in his long to a Queen medley, underrotating his opening quad and missing the takeoff on his triple Axel. He also fell on his second triple Axel attempt. The 2013 U.S. national silver medalist managed to land four clean triples for an eighth-place finish in the long (151.67). He slipped to fifth overall (240.34).