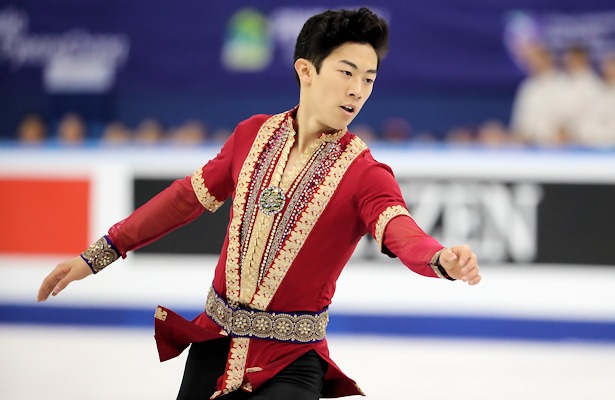 If anyone had a doubt of who the new quad king is, they know it now: USA’s Nathan Chan won his first championship title at the 2017 ISU Four Continents Championships on Sunday landing a total of seven quads en route. Olympic champion Yuzuru Hanyu of Japan settled for the silver medal and the bronze went to his teammate Shoma Uno.

Chen skated to the lead with a clean short that included a quad Lutz-triple toe, quad flip and triple Axel. In the long to “Polovtsian Dances,” the ISU Grand Prix Final silver medalist actually did more quads than triples: five quads as opposed to three triples. He opened with a big quad Lutz-triple toe and a triple flip, followed by a somewhat shaky quad toe and quad toe-double toe and a quad Salchow. The two triple Axels weren’t perfect, but the triple Lutz was fine. Chen also collected all level fours for his spins and footwork to score 204.34 points, a personal best. With a total of 307.46 points, he was able to maintain first overall.

“There were some mistakes here and there,” said the U.S. champion. “There are definitely things I need to work on, but I’m certainly happy with the way everything went and I’m so happy that I got the gold medal today.”

“I was very happy with the short program,” the 17-year old continued. “All of the jumps that I did were well-executed. I had some tiny little bobbles here and there, and today I made more mistakes than I wanted to. But I set out to do a more difficult program than I initially intended, so I’m happy I was able to at least stay on my feet and rotate everything.”

“Initially, a few weeks ago, that (five quads) wasn’t the plan,” shared Chen, “but as time progressed and I saw what the other guys were doing, I decided I didn’t want to be held back by myself. It played out well for me today, so I’m glad that’s the way things went. We’ll see what happens at Worlds.”

Two mistakes cost Hanyu the championship. In the short program he popped his planned quad Salchow into a double, but he did at least a triple toe for a combination with it and he also hit the quad loop. The Japanese superstar trailed Chen by 6.08 points heading into the long. Hanyu then came out and delivered an excellent performance to “Hope and Legacy” by Joe Hisaishi, reeling off four quads (including the loop) and three triples (including two Axels), but he again doubled a Salchow.

Nevertheless, the 2014 World champion was first in the free skating and had another big score of 303.71 points overall. The 22-year-old impressed once again with the ease with which he moves across the ice and his effortless jumps.

“I feel like I challenged myself,” said Hanyu. “My priority was to land four quads, but I made a similar mistake like in the short program (popped the Salchow), but I think I’ll be able to fix that. Originally, I wanted to go for a quad Salchow. I felt I still had energy to do it. Then I decided to do two quad toes and I was able to land them.”

Uno has joined the “quad craze” (as quoted by Nathan Chen) by adding first the quad flip to his programs and now the quad loop. He landed both and two quad toes (one was shaky), but he fell on both triple Axels. In the short, the quad flip could have been better. He dropped from second to third at 288.05 points.

“I felt okay at the beginning of the program, then I made a mistake in the middle and I felt bad about it,” said the 19-year-old Japanese champion. “In the first half of the program, I was happy to land the quad loop. I didn’t have a good consistency in practice for the jump, and I think my desire to land this jump so badly made it happen. But I missed the two triple Axels, and those are jumps I know how to land. Maybe I was not focused enough going into these jumps.”

Canada’s Patrick Chan, who had won the title a year ago with a spectacular free skating, finished fourth. The short was subpar with a fall on an underrotated quad toe and a stumble on the triple Lutz-triple toe. Chan felt like the timing was off for the quad. The opening of his exquisite long program to “A Journey” was strong with a quad-triple toe and triple Axel, but then the three-time World champion went down on the quad Salchow and also missed the second quad toe.

“I started great with a strong quad toe and the triple Axel,” said the Olympic silver medalist. “The Sal (Salchow) and the second toe, looking on the video it seemed a little underrotated. Those are things that I think that I need to work a little on the snap off the ice, being a little more efficient. That’s something I can work off the ice as well as on the ice.”

Boyang Jin of China struggled with some jumps as well to place fifth. He also fell on the quad loop that he attempted for the first time in an international event.

“It was not bad,” the reigning World bronze medalist commented. “My goal was, as always, to surpass myself and I am pleased with today. I missed it (the quad loop) here, but I haven’t been practicing it long enough yet, [so] it is not so consistent yet.”

USA’s Jason Brown missed the triple Axel in the short and stood in ninth place, but pulled up to sixth with a good free skate that included six clean triples. The national bronze medalist, who had been injured, decided to take the quad out.

“Kori (Ade, coach) said that going to this event was like building a house,” explained the 22-year-old. “The pieces from what I did at nationals are building up to what I will do at the World championships. Today the quad wasn’t ready, so we built up a different part of the house. We built up the rest of the program around the decision to take it out and focused on making the most out of the other points I could get. It’s a decision that we made today. Because of my leg injury, I couldn’t start doing them (quad toes) again until this week. My hope was that it would be ready to put in the program, but unfortunately it wasn’t at the point where it was worth doing under the circumstances.”

“This was a huge growing experience from nationals to here,” added the skater who is motivated for the upcoming worlds. “I feel so much stronger. I definitely improved certain aspects of the program.”

Uzbekistan’s Misha Ge, another crowd favorite, also opted for clean performances and did not try a quad.

“I’m trying to show the whole package – the jumps, the spins, the elements, the artistry, the footwork,” he explained. “I understand that I’m lacking some elements the great skaters now have, but I’m trying to do what I am capable of. I am pleased that these two program were probably the most complete in the past two years. In the past competitions I was trying to catch up on the difficulties and now I was focusing on the program as a whole. Since I said this might be my last couple of competitions, I just want to enjoy these moments and to skate from my heart.”