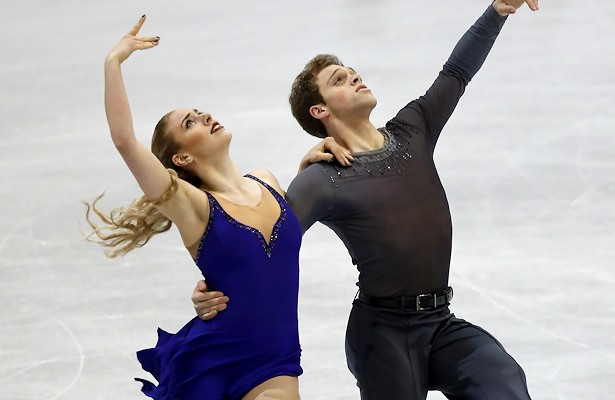 Rachel and Michael Parsons continued the success of the U.S. ice dancers and clinched the Junior World title Saturday in Taipei City at the 2017 ISU World Junior Figure Skating Championships. Teammates Christina Carreira and Anthony Ponomarenko came from sixth place to take the bronze, while Russia’s Alla Loboda and Pavel Drozd slipped from first to second and settled for the silver.

Parsons and Parsons were second in the short dance, but it was close. Skating last in the free dance, the brother-and-sister team turned in a strong, flowing performance to “Singing in the Rain” in a modern arrangement by Sophia Sin and Alexander Goldstein. As in their short dance, they earned a level four for almost all elements. The ISU Junior Grand Prix Final champions earned a personal best score for the free dance and edged ahead of Loboda and Drozd with a total of 164.83 points. The difference in the end was a mere 0.55 points.

Loboda and Drozd gave two smooth performances in both segments as well, and had the same levels as the winners. Their “Malaguena” free dance was powerful and characteristic. Both teams were equal and it came down to which style you prefer. The judging panel in Taipei slightly preferred the Americans over the Russians and awarded them a higher component score, however, it really could have gone either way.

Both teams will move up to the senior level as they are aging out of juniors.

Loboda and Drozd were also pleased with their performances in Taipei and look forward to the future.

“It will be interesting (to compete in seniors) and we are waiting impatiently for new emotions and feelings,” Loboda commented.

“I think it will be a big experience for us,” said Drozd. “I think you all know that there is a big difference between the junior and senior teams. So, we want to improve in the time we have before our first senior season. Maybe the main advice for us is to be ourselves and show what we can do in our first senior season, because I don’t think we have so high goals as the next year is the Olympic season.”

Bronze medalists Carreira and Ponomarenko will stay in juniors. This young team – both are 16 years old – impressed, especially in the free dance to “Exogenesis Symphony,” and moved up three spots in their debut at Junior Worlds.

“We really happy with how this season went. We achieved our goals and to top it off with the bronze medal was great,” Carreira said.
Ponomarenko is the son of Marina Klimova and Sergei Ponomarenko, who have a complete set of Olympic medals: bronze in 1984, silver in 1988 and gold in 1992. However, he does not feel intimidated by the legacy of his parents, who competed for the Soviet Union, but moved to the USA following their career.

“They really helped me throughout my career and they pushed me forward every day,” he said. “I feel like it is not an advantage, but it is very helpful what they say to me and how they help me.”

Russia’s Anastasia Shpilevaya and Grigory Smirnov and Anastasia Skoptcova and Kirill Aleshin placed fourth and fifth, proving the strength of the Russian dance school. Shpilevaya and Smirnov’s free dance to Italian pop songs looked somewhat old-fashioned, but the crowd enjoyed it. Skoptcova and Aleshin turned in a characteristic Flamenco.

Defending World Junior Champions Lorraine McNamara and Quinn Carpenter did not have a good competition and finished seventh. In the short dance, they struggled in the side by side steps that were only a level one and in the free, Carpenter had problems with the twizzles.