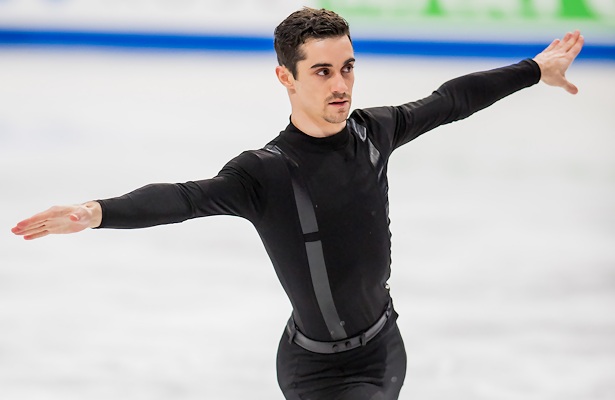 Javier Fernández of Spain delivered his stylish and expressive interpretation of “Malagueña” highlighted by an exquisite quadruple toe loop-triple toe loop combination, quadruple Salchow and triple Axel. The program, replete with intricate hand positions and delivered with commitment, earned the two-time and defending world champion a personal best score of 109.05. The audience was particularly exuberant, clapping throughout the Spaniard’s foot work sequence.

“I enjoyed it a lot and I think everybody said that I was skating well this week,” Fernández said. “I was able to perform really well.”

“It was a lot of pressure,” he said about skating in the final flight of men hurling quadruples jumps throughout the warm up. “Every year, we have more skaters who are trying to get on the podium and there is only place for three. Every year it is getting more complicated so we have to be more focused and a little bit more nervous every day, and I think that’s what makes a competition even more exciting for everybody.”

“I think I was able to perform how I have been practicing, so I was very happy about it,” the small, but mighty skater said.

Uno was particularly chuffed to start this World Championships on a positive note after finishing seventh last year in Boston. “Last year at this competition, I ended up in tears, so this was my lesson and I have learned from my mistakes in the past. This year I have been focusing to finish this competition with a smile.”

Patrick Chan of Canada skated his Beatles program sublimely with precision and measure. The three-time World champion landed a secure quadruple toe loop-triple toe loop, triple Axel and triple Lutz. The light-hearted routine was punctuated by a delicate footwork sequence. Chan’s hands were clenched with satisfaction and relief at the end of the routine while the audience showered him with applause. The nine-time Canadian champion finally broke 100 points at an ISU event with a score of 102.13.

“I wasn’t going into it being like ‘Oh, I need to be first or third,’ I was just ‘Okay, I know what I need to do, I will get the marks that I deserve if I put everything on the table,'” said the veteran skater. “It was a great feeling to wait for those marks. Breaking 100 with one quad – that’s huge for me. To do it at a Worlds, it just shows that.”

“Imagine if I did do a second quad where the points would be and where I would be in the standings,” Chan said about his personal best score and the potential to increase it further with more technical difficulty (a second quadruple jump). “So, one step at a time. I couldn’t add a second quad without accomplishing this today. I wouldn’t have the confidence to.”

“For today’s performance, I think this is my best short program this season and I was quite satisfied with the performance today,” said Jin. “I think I did my best for the points, though I did not reach 100. So, I think I was maybe not perfect on the landings and there are some levels that I can actually improve on in the future.”

Yuzuru Hanyu of Japan began his energetic and saucy program to Prince’s “Let’s Go Crazy” confidently with a quadruple loop, but then swung his free foot down on the landing of the quadruple Salchow and doubled the toe loop of the back end of the combination. He managed a triple Axel with finesse later in the program and scored 98.39 to finish in fifth place.

“Maybe all the jumps were not so great,” the 2014 Olympic champion said after his skate, “but I so much enjoyed skating.”

USA’s Nathan Chen opened his program to “Le Corsaire” by Adolphe Adam with a quadruple Lutz-triple toe combination followed by a quadruple flip. But later in the program, the 2017 Four Continents champion tumbled on the triple Axel. His energetic and elegant performance achieved a score of 97.33 to finish in sixth place and round out the final group of skaters in the free skate.

“After the skid, I didn’t really keep my axis properly and I dipped to the right a little bit and just that little shift kind of threw me out I think,” Chen said, assessing the fall. “It was something that I will learn to prevent in the long program and make sure that I don’t do the same little mistake. And I think that the pressure kind of got a little bit to me before I got on. This is probably the most nervous I have been going into an event all season, but it’s good experience for me and something I will have to learn to fix for the long program.”

Mikhail Kolyada of Russia was seventh (93.28) after a clean skate which featured a quadruple toe-triple toe combination. USA’s Jason Brown also put out a solid short and was happy with his score of 93.10 for an eighth-place finish.