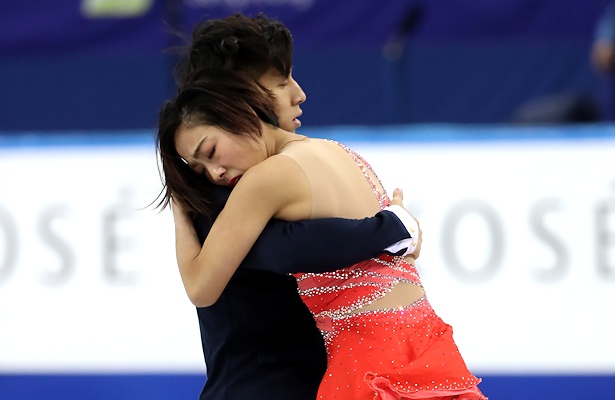 As the song “Bridge Over Troubled Water” came to an end, China’s Wenjing Sui and Cong Han completed their performance in the 2017 Four Continents Figure Skating Championships. Everything in this tough year coming to Sui’s mind brought tears to her eyes while she hugged Han tightly, sharing a moment together with what they had been gone through.

The team won their first competition after returning to the ice rink, making it their fourth Four Continents title with a career record high of 225.03 points overall.

Renowned Canadian choreographer Lori Nichol customized the song “Bridge Over Troubled Water” for Sui and Han, who thought it was a unique idea and matched their own story. Last season, their wonderful performance perfectly express the content of “Spanish Romance” and “Samson and Delilah.” This persuaded Nichol to show them “Bridge Over Troubled Water” — a piece which she had reserved for years as she thought they would perform to this song very well.

Apart from Nicol, the 2002 Olympic gold medalist David Pelletier (CAN) and 2014 Olympic bronze medalist Carolina Kostner (ITA) gave Sui and Han much help as well. Together, they helped the two skaters improve details of contents of the program.

“Bridge Over Troubled Water” narrated what Sui and Han had gone through in the past year. From surgeries to supporting each other, they eventually walked out of that dark period. They tried to elaborate this story through every detail and each movement they made. Sui said, it had definitely touched them performing before audiences.

At the beginning of the routine, they stared at each other with deep worry in their eyes, which symbolizes the beginning of the tough year. After the 2016 World Championships, Sui sustained a very serious foot injury. In order to ensure her full health for the 2018 Winter Olympics, her team decided it was best to have surgery. The pressure was great on Sui, who was not certain about her future at that time.

After completing a quad twist, they had a lift, followed by a section of steps, and then they opened their arms, stand one behind the other, which also expressed their worries.

After the side by side triple Salchows, they did a backward outside death spiral, which symbolized the tense atmosphere when surgery was going on. Sui said she was so nervous when she was at the trauma room. The doctor kept reassuring her that she would get better, but it didn’t work for her. Sui and Han stared at each other with worries and trust. It took a long time to recover after the operation, and she had to deal with all those negative thoughts. Han also kept helping and telling her that he would come back for sure, but she still doubted that.

Then an arabesque pose followed the spiral, which expressed how they cherished the opportunity of getting back to the ice. Sui said, although she was thrilled to be back at the rink, she could not do much as the mood is from the bottom of her heart.

After a throw triple Salchow, the two both briefly hold up a knee, depicting the pain from Sui’s foot. During the first week after the operation, she couldn’t even go to sleep unless the doctor administered a painkiller. She stayed in the bed for an entire 100 days before she could move her foot.

During the second half of the show, they completed a flying camel change foot combination spin, and then stretched out their arms, which expressed Sui’s confusion after operations. It took a long time to recover, so she had many thoughts as she wasn’t able to move at all. She was not sure whether she would return to the rink or get back to a competitive condition.

At the end of the free skate, they completed lifts with the lyrics ‘Like a bridge over troubled water, I will lay me down!’ The lift was designed based on the lyrics, but it was also their story. Helping each other out of the haze was exactly what they did during the past year.

Sui and Han did not have enough time to prepare back to competition. They only had a month after recovering to work with all the technique movements. “We have to train everyday and could not let ourselves stop,” recalled Han. “We paid all attention to training, programming and details.”

As the Four Continents were approaching, Sui felt anxious and could sleep only three to four hours a night. She worried whether she could perform well enough, however, she felt good when she arrived in South Korea. “I’m so happy to come back, so nothing matters but enjoying the moment I stand on the rink,” she said.

All of hard work paid off. As the music came to an end, Sui and Han’s fantastic performance impressed audiences a great deal. After the free skate, some ice dance skaters told them that they had been touched, even to tears.

After being away from the ice for a whole year, Sui and Han came back. They became better and more confident. The upcoming 2017 World Championships and 2018 Winter Olympics will test the Chinese pair as they still have a long way to go. We wish them best of luck in the future.