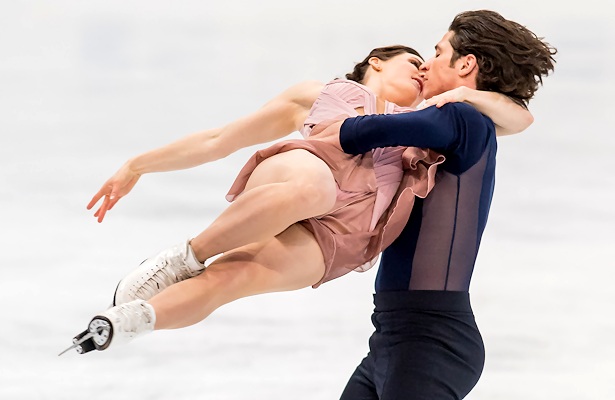 After personal best scores were handed out in Boston like candy at Halloween, the love from the judges panel was not flowing as freely at the 2017 World Figure Skating Championships in Helsinki during the free dance.

In an event of high drama, none of the top medal contenders skated to a personal best, many due to stumbles, with the exception of France’s Gabrielle Papadakis and Guillame Cizeron, who delivered a  record free dance score of 119.15. The feat however was not enough to catch up to short dance leaders, Tessa Virtue and Scott Moir of Canada, who won their third World title.

Virtue and Moir claimed the gold medals in Helsinki with a gentle and intimate dance to “Pilgrims on a Long Journey” by Coeur de Pirate, “Shadows” by Karl Hugo, and “Latch” by Sam Smith. The 2010 Olympic champions opened their performance with a dazzling stationary lift resembling an unfurling flower as Virtue extended atop Moir.

Later in the program, however, Moir lost his balance and slipped to the ice during the circular steps, which resulted in confusing grades of execution (GOE) ranging from -2 to +3. Nevertheless, the duo was solid in all other elements and scored 116.19 in the free dance to complete the competition with a total score of 198.62.

“There were a lot of positives,” said Moir. “We accomplished a lot of things in this program, technically, that were able to put us on top against a really, really, really good French team.”

“It’s not the way we thought we would win,” Virtue added. “But if you had told us at the beginning of the season that this was the place we would be in and we would have achieved this kind of success really consistently throughout the whole year, we would have been thrilled. So we have to come back to that and remember what this was all about and remember why we wanted to be here. In that respect, it was a huge success.”

Two-time and defending World champions Gabrielle Papadakis and Guillame Cizeron of France unspooled a beautiful set of elements, showcasing their gracefulness and strength to “Stillness” by Nest, “Oddudua” by Aldo Lopez Gavilan, and “Happiness Does Not Wait” by Olafur Arnalds to clinch the silver medal. The team opened with a smooth level four stationary lift and followed with solid level four twizzles and four other level four elements. The three-time European champions earned a free skate score of 119.15 for a total combined score of 196.04. Among the many highlights, was a curve lift midway through the routine in which Cizeron is in a seated spread eagle position.

“This was one of the best free dances of our career,” said Papadakis. “This was a year of experiments. We have learned something, we’ve learned a lot in this season. Ending the season like this is really motivating for next year.”

“We are just really proud of what we did tonight,” said Cizeron. “We really enjoyed this moment. We skated the way we wanted to skate and that’s the greatest feeling. Even if we didn’t win this battle, we definitely are proud of what we did. This magic that we feel on the ice, it has no price.”

Bronze medalists Maia Shibutani and Alex Shibutani told the story of their journey to success with their “Evolution” free dance to earn a free dance score of 110.30 and total combined score of 185.18. The Americans managed five level four elements, but received a deduction for an extended stationary lift.

“We just focused on our performance in the long program today,” said Maia Shibutani. “We stepped off the ice with the same feeling as after the short. We missed couple of minor things today, but in total, we are satisfied.”

Kaitlyn Weaver and Andrew Poje performed their intense “Concerto de Aranjuez” by Rodrigo highlighted by spectacular level four lifts. The 2015 World bronze medalists earned a score of 109.97 for a total competition score of 184.81 to finish in fourth place.

“We really had no expectations for a placement at this Worlds,” Weaver said, surprised to finish in fourth. “It has been a little bit of a roller coaster of a season, but I think it’s a testament to how hard we have been working. The place that we are performing at mentally is a perfect place and we are able to be at our best when it counts. We are very pleased that we were able to connect with each other and enjoy our performance today.”

“It’s the story of my life,” Weaver said laughing in reaction to missing the bronze medal by .37 points.

Russians Ekaterina Bobrova and Dmitri Soloviev were fifth with their free dance set to “Prelude No. 20” and The Four Seasons. The 2013 World bronze medalists managed five level-four elements and scored 110.52 in the free dance for a total competition score of 184.06.

“We think that this time judges gave us better points,” Soloviev said about the free dance scores in comparison to the short dance. “Overall, everything worked out great here; we are very happy with our skating at the Worlds.”

The 2014 World champions, Anna Cappellini and Luca Lanotte skated their charming “Charlie Chaplin” free dance highlighted by five level-four elements including an impressive straight line lift with Cappellini in a spiral position atop Lanotte. The Italians earned a score of 110.03 for a total competition score of 183.73.

“We are definitely a little disappointed with the scores,” said Cappellini. “We felt we did the best performance of the year and not only that, we had the crowd standing, so we felt a great connection and great power on the ice. Definitely, we will talk to the judges and try to understand what they saw today. It was definitely not what we felt.”

Americans Madison Hubbell and Zachary Donohue were ninth after he crashed to the ice on the twizzle sequence (177.70).