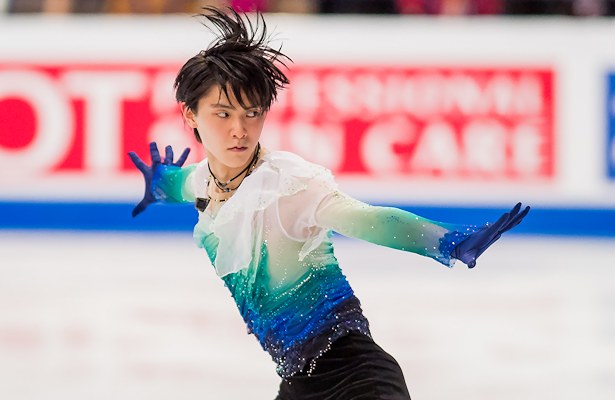 Japan’s super star Yuzuru Hanyu heads with confidence and optimism into the Olympic season following a year with some firsts. Hanyu has joined the “quad king club,” becoming the first skater to land a clean quad loop in competition last fall at the Autumn Classic in Canada. By the time the World Team Trophy came around, he went for five quads in his long program and landed four of them, including a new quad toe-half loop-triple Salchow combo towards the end of the routine.

The Olympic Champion feels now he has the arsenal he needs for his next big quest – defending his Olympic title – but has not thought about changing his jumps. He is still unsure if he will have five quads in his long program at the beginning of the season.

“It could be a potential challenge,” the two-time World Champion analyzed. “I want to have different options for difficult combinations. Maybe I need to do many different quads, but in general, I do not plan to change the content of my programs. I tried different jumps this season, and now I feel very confident. I am able to jump very well and to get a high grade of execution score. The experience I gained this season will probably have a positive effect for next season, hopefully.”

So Hanyu can more or less check off the technical side, however, he obviously needs to make sure he is consistent as he has popped some jumps a few times. This happened to him in the short program at Worlds and the World Team Trophy and he needed to catch up in the free – which he did superbly, especially at Worlds.

“I need to take some time to analyze what is the problem with the short program, because I am starting to have a negative image of the short in general,” the Four Continents silver medalist pointed out.

He was pleased with his new jump, the quad loop, though.

“When I’m thinking of the quad loop, this is my first time to try it in competition, but actually I did it about seven times in the long. I think I popped only Skate Canada,” he reflected. “I’m satisfied with the loop, but the Salchow this season was a problem.”

“After being absent for two months at the beginning of the season because of an injury on the toeloop, I was very scared,” Hanyu admitted. “At the end, I did two toeloops (in the program) and it made me very confident. I did (at the World Team Trophy) for the first time the combination quad toe-half loop-triple Salchow, and although it was not perfect, I was satisfied with it. I also did three quads in the second half of the program for the first time and maybe I am the first skater to that.”

“This is positive,” he noted. “Also, with regards to the Olympic season. I had enough energy to do that, but I still need to work on becoming stronger physically and mentally.”

The next step now is mounting new programs, however, at press time, the skater had not yet decided on the music for next season.

“This season, I wanted to challenge myself and in that sense, it was a very successful season for me,” Hanyu noted referring to his two very different programs “Let’s Go Crazy” by Prince for the short and the lyrical “Hope and Legacy” by Joe Hisaishi for the long. “The good thing for me is that I can do very different styles of skating in the short and in the free programs. This is something I would like to do again next season.”

“I am thinking of the grade of execution scores for my elements,” he added, “but most of all, I want to be able to show in my programs what I want to express. I think I can improve my programs, especially after challenging myself technically.”

Even though Hanyu is currently one of the best skaters of our time with the complete package of technical difficulty with his three different quads and artistic expression, he has to deal with disappointment sometimes when making errors in the short program at Worlds and the World Team Trophy. When disappointment strikes, the Olympic champion takes it hard. After the short program at the World Team Trophy, a lot of things went through his mind.

“At night I couldn’t really sleep,” he confessed. “I kept waking up at three or four in the morning and thought about how I looked on the ice and what the spectators saw.”

The World champion talks through things with his coaches and other people close to him, but in the end, he thinks about it a lot by himself.

“The feeling when you skate is very important, and I am the only one who knows that feeling,” he explained. “In the end, it is me who has to take the decision. In my free skating (at World Team Trophy) I went for five quads and I decided before my program about it. It is not because I missed something in the short, but I wanted to do it.”

There is a lot of pressure on Hanyu every time he steps on to the ice. His numerous fans, the spectators in general, the media all expect him to deliver. The ice rink becomes a sea of Japanese flags and the cheering is deafening when the star takes the ice. What does he feel in this moment?

Hanyu laughed. “I was happy. The people in the world are not only watching me, but all the skaters, and I am just very happy that I can be one of those skaters. I am also very happy when someone watched me and started following skating and becomes a fan of skating. It makes me happy when new fans are attracted to skating and when kids and even adults start skating after watching us.”

The World Team Trophy, where Team Japan took the gold medal for the second time since 2012, turned out to be an energy booster for Hanyu. “I had a lot of fun at this event and it was the first time in a while that I was able to enjoy a competition so much,” he revealed.

The Olympic champion is excited about the upcoming season. “Just because the competition is at such a high level right now, I enjoy training and I feel more motivation. I am happy that I am skating now.”