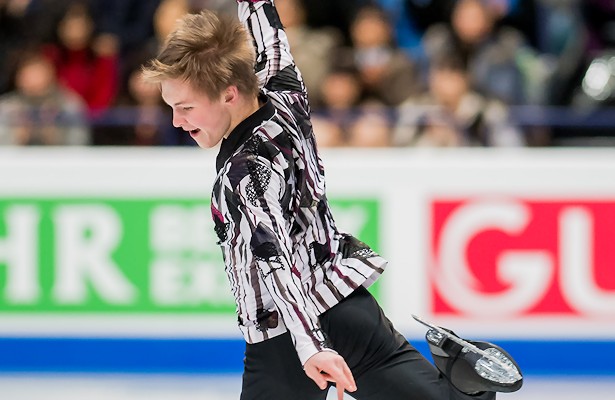 On a sunny day at the end of May, Mikhail Kolyada was the only skater from his training group at the Figure Skating Academy in St. Petersburg, Russia, to come for practice. Everyone else, including his long-time coach Valentina Chebotareva, had already gone on vacation.

“From today, everybody has time off and I only came to jump a little. I am on new skates,” the cheerful 22-year-old explained. After practice, he packed a large bag in the locker room as he, too, was taking a 15-day vacation to spend time with his family in and near St. Petersburg.

To do a little extra practice might only be a small detail, but it shows the commitment, the ability to work hard and the determination that characterizes the Russian champion. Kolyada is always willing to do an extra step and he has changed a few things to prepare for the upcoming Olympic season.

“My approach is a little different,” the European bronze medalist shared. “I have never participated in this process, preparing for the Olympic Games. I think it will be very interesting. I feel each athlete of high level needs to go through that and I think that the time has come for me and I’m ready to go through this trial.”

While the skater acknowledges that the World Championships is a prestigious event, he recognizes that the Olympic season is even more intense.

“There are all kind of sports, there is a special atmosphere and I want to feel all that, to be there at this event,” Kolyada said. “I talked to athletes who went to the Olympics, and they told me how it is like, about the Olympic village. The Olympics are a special competition and something you remember for your whole life. I not only want to participate, but I want to perform well so that it is not embarrassing and that afterwards, there won’t be talk.”

In order to be competitive, Kolyada wants to upgrade his technical content. He plans to incorporate the quad Lutz in the short, as well as in the free skate. He also plans to add a quad Salchow and toe loop in the free skate as well.

“We’ll see in the season if we add another toe loop,” he shared, “so I might have four quads. I think I have to set these goals for myself. I think it is realistic for me and I need to go for it. I feel well prepared.”

In addition to his long-time choreographer, Olga Kliushnichenko, Kolyada also turned to a new choreographer, two-time World champion and 2006 Olympic silver medalist Stéphane Lambiel. He worked on his programs with Lambiel in Switzerland from June 19 to 23.

“Stéphane is a great skater,” said the Russian. “I always enjoyed watching him. He is special. It was my idea to approach him. I asked Maxim Trankov and he helped me to contact him. It was great. I really liked working with him. From the first day, we found a good contact and our work was very productive.”

Although the music is still being kept secret, the European bronze medalist gave a few hints.

“The short is a completely different style,” he offered. “The free is maybe a little similar in style (to the past season), but still it is something different. I like them, the short and the free. I feel the character, what I need to do and how to bring across the emotion. I think it will be great and everybody will appreciate it.”

Off the ice, Kolyada has decided to continue his studies at the Institute of Physical Culture in his hometown after finishing his bachelor’s degree a year ago. He is now pursuing a master’s degree.

“I decided to continue studying, because four years don’t count as a full higher education,” he explained. “If I want to work as a coach in the future, then I could work only with beginners or kids that are a little bit older. So, basically, I couldn’t work with kids older than 16 years of age, but I would like to.”

“To work with the little ones is good, too, but I would like to grow as a coach and not remain in one place. Therefore, I thought it is better to do it (studies) now, because later I will be either lazy or just won’t feel like it,” he noted with a laugh.

Kolyada used his vacation mostly for studying, but he knows it will be difficult to finish his degree next spring as the Olympic season is ahead.

“Maybe I will take an academic year off, because I need to write a lot of papers,” he said. “I looked through the requirements and you need to write a master thesis. It needs to be longer than the bachelor thesis.”

The Olympic season will be very busy indeed. The skater will have a competition approximately every two weeks.

“I looked at my plan and I think I’m doing Ondrej Nepela in Bratislava, Finlandia Trophy, Tallinn Trophy, and two Grand Prix in Moscow and China,” he listed. “Then it’s Russian Nationals, Europeans, Olympic Games, and Worlds.”

Although he is the current leader among the Russian men now, Kolyada knows that his competitors are chasing him.

“There is competition (inside Russia),” he acknowledged. “Maybe it is not at the same level as for the girls, but it exists. The next generation is pushing and you feel it. You don’t want to fall on your face, but you want to improve your skills with each year. Obviously, it is difficult to retain your position, but I will do everything possible for it.”

However, Kolyada considers himself being his strongest competitor.

“I don’t want to look at what others are doing, who is jumping what,” he said. “There is not enough energy for that. You just need to do your job and that’s it, because really, everything is in our head – everything, all victories and all failures. It all depends on us. There is a saying, ‘trust in God, but keep your powder dry.’ He can help, but you have to do something as well. I’ve been told that from childhood, but I just didn’t attach importance to it. But then at one point I understood and now it is firmly in my head that everything depends on me and it is not important what others are doing, if they fall or not.”

I just have to skate well myself,” he concluded. “We are an individual sport after all, and everyone is in for himself, even if there is a team competition. Everybody is skating what they are skating.”