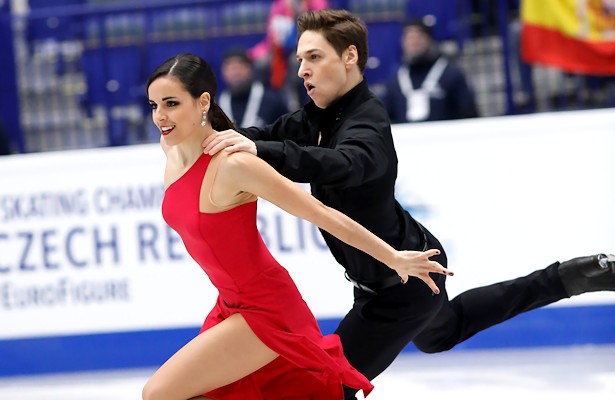 Sara Hurtado and Kirill Khaliavin, who teamed up last spring, won the national title and represented Spain at the 2017 ISU European Figure Skating Championships 2017, finishing a respectable 13th. However, the Spanish Federation then decided to send another team, Hurtado’s former partner Adria Diaz, who now skates with Olivia Smart, to the 2017 ISU World Figure Skating Championships.

“It was surprising, but at the end of the day, it was all down to a decision of our Federation and they considered that was the best,” said Khaliavin, 26.

While Hurtado and Khaliavin’s season ended early, they regrouped quickly following this disappointment and focused on training.

“Even though we don’t agree with the way things were handled, we have to respect the decision and work harder for this upcoming season to show our best,” said 24-year-old Hurtado. “We decided to concentrate on what is in our hands and what we can actually do about it. The hardest part was to improve the programs without the chance to perform them one last time, like suddenly all the plans changed.”

In the past few months, Hurtado and Khaliavin have been creating and working on new programs and building as a team. For the short dance, they selected music by Carlos Santana while the free dance is set to an unusual Flamenco version of Don Quixote.

“The short dance is a tribute to Carlos Santana. I personally love the Latin groove he has and we chose two of his songs that definitely will bring the heat to the ice,” Khaliavin revealed. “As of the free dance, being an Olympic season, we want to represent Spain and its culture with our own interpretation of Don Quixote.”

“Working with Antonio (Najarro) on this choreography has been an incredible experience,” he continued. “I heard about him before, but is even better I’m real life. I’m really excited about this free program. It made me like the Spanish culture even more. Their dances are so rich.”

“It (the free dance) is the best mix of Russian and Spanish culture,” added Hurtado. “Russia has the ballet, and probably one of the best representations of it is here in Moscow at the Bolshoi, but we are taking that classical part and adding flamenco moves as the story is about a couple that falls in love in Barcelona. I’m loving every minute we work on it, it’s fun! And seeing how Kirill submerged himself in all Spanish culture is inspiring. He is very brave.”

The dancers are keen on beginning the new season.

“We approach the season with excitement mainly and look forward to having a full season to compete. We will train in Moscow and our plan is to be ready as soon as possible to start competing around September,” noted Hurtado noted.

“Last year, we were only able to start (competing) in November and it makes a difference when you have the chance to evolve the programs through different competitions,” Khaliavin explained.

Hurtado and Khaliavin train in Moscow under Alexander Zhulin and his team. Khaliavin is Russian and represented his native country at European and World Championships with his former partner Ksenia Monko. With her, he also won the World Junior title back in 2011. That was the same year when Hurtado and Diaz, who were the first ice dance couple to represent Spain in ISU competition, came 9th at Junior Worlds.

However, Hurtado and Diaz split up in 2015 due to personal differences, while Monko retired from competing due to injuries later the same year. Hurtado and Khaliavin were looking for new partners and found each other.

“Ksiusha (Ksenia Monko) strongly supported my idea to continue skating with Sara,” offered Khaliavin, who had skated with Monko for 14 years. For four years, they had been an item off the ice and got married at the end of May in Moscow. Monko has turned to coaching in Moscow.

“She likes it and I think she does a great job,” her husband noted.

Khaliavin and Smart just recently learned that both their applications for Spanish citizenship, which they need to be eligible for the Olympic Winter Games, was approved.

“This is the best news to motivate me even more,” Khaliavin said.

“It was a very nice surprise,” added Hurtado. “We were thinking it would take at least until September.”

The skaters don’t know yet which competitions in the fall they want to attend. As of now, they have not yet been assigned to a Grand Prix event.

“Our focus is to keep gaining experience and confidence as a team, and the best way to do that is by competing as much as possible,” Khaliavin pointed out.

Hurtado has become a real skating nomad. She started out with Diaz in her hometown of Madrid, but then moved with him first to London, Great Britain and then to Montreal, Canada for training. She has been living in Moscow for more than a year now.

“All cities are so different. Each has its own magic but, actually, it has been an easy adaptation,” the ice dancer shared. “Everyone welcomed me with open arms, and every time I’ve needed something, I’ve had someone who could help. It still surprises me how much people love the Spanish culture wherever I go. The people and the country are seen as a sunrise that makes everyone happy and I’m honored to be part of it.”

She admitted that the Russian language is difficult for her to learn.

“Even though I understand it much better, I still don’t know enough to follow a conversation, but luckily Moscow is an international city and I’ve found a lot of people who speak English and Spanish too. That’s also why I think I’m learning Russian much slower,” she said with a laugh. “Also, what I like about Moscow is how close it is from home. It’s one flight of four and a half hours and I’m in Madrid. It helps me not to feel as homesick as I am able to go more often.”

Hurtado has praise for her partner, who has been learning Spanish intensively. “He is learning by himself. He is very motivated and he improves really fast.”