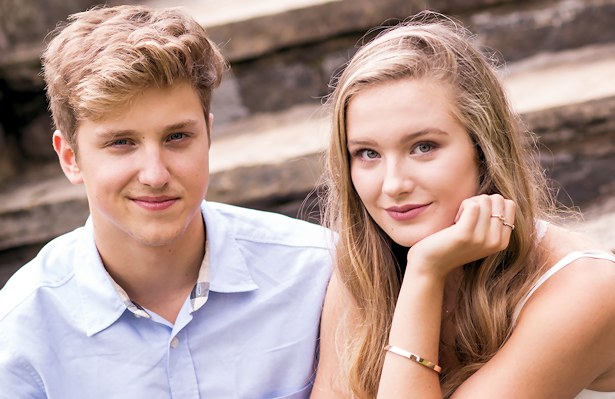 In their third year together as a team, USA’s Christina Carreira and Anthony Ponomarenko placed second in the junior division at the 2017 U.S. Figure Skating Championships. Two months later, they took the bronze in their Junior World debut in Taipei City, Taipei.

“We definitely were not expecting to make the podium at Junior Worlds!” said Carreira. “We didn’t really have any expectations going in because it was our first time. Our goal was to skate two strong programs and hopefully make the top five.”

Before teaming up, Carreira and Ponomarenko competed against each other in the intermediate and novice decision with other partners. Carreira skated with Simon-Pierre Malette-Paquette until he was injured during the summer of 2013. She trained alone for a few months until Igor Shpilband, whom she trained with part-time, suggested she do some tryouts and look for another partner.

It was Ponomarenko’s mother, Marina Klimova, who thought the team would eventually be a good match after seeing Carreira in Lake Placid, NY. After Ponomarenko ended his partnership with Sara Feng in January 2014, he later moved to Novi, Mich., to train with Igor Shpilband permanently.

“I had a couple tryouts with other girls, but I knew right away I wanted to skate with Christina,” said Ponomarenko. “We had our try out and it went very well and we decided to skate together in April of 2014.”

Shpilband seemed to be a natural fit for the team since they had already worked with him part-time with their previous partners. As their main coach, he mostly works with them on the technical elements and choreography.

“Rohene Ward also works on our choreography and adds polish,” Carreira added. “Fabian Bourzat helps us create new lifts and works on our skating skills, Adrienne Lenda on our technical elements, Greg Zuerlein on the compulsory dances, footwork, and skating skills. We also have Gyrotonic classes and ballet with Veronique Breen, and Aaron Stickler is our trainer.”

“We also do acrobatics with Oleg Ouchakov and ballroom with Oksana Zolotarevskaya,” offered Ponomarenko.

“They are a very special team,” said Shpilband. “Every single time I come to the lessons, you can be assured they are bringing a 100 percent. Emotionally, they are together and there to work. They are very positive which is very, very important. It’s really a pleasure to work with skaters like this. I’m really enjoying it every day, seeing the skaters bring so much dedication.”

“There has been quite a bit progression since 2014,” he added. “I’m very happy with it. They’ve been showing tremendous improvement from one year to the next. The first year they got together, they showed they could be competitive on the junior level. The next year they medaled at Junior Worlds. It’s incredible!”

At the 2017 World Junior Figure Skating Championships, the team earned a new personal best (94.15) with their free dance to “Exogenesis: Symphony Part 3 (Redemption)” by Muse, which was choreographed by Shpilband along with contributions from Ward.

“The story was about two people falling in love for the first time and experiencing new feelings,” explained Carreira. “Igor wanted to give us a story that we could relate to and that was more innocent because we are younger team.” It also happened to be one of Ponomarenko’s favorites of their career thus far. “It projected our maturity in our skating that is much needed at the top junior level,” he said.

This season, the U.S. Junior silver medalists are skating to Latin American rhythms (Rhumba, Cha Cha, and Samba) for their short dance, and for their music, have chosen “Perhaps, perhaps, perhaps” by the Pussycat Dolls, “Give it Up” by the Good Men, and “Conga” by Gloria Estefan for their music.

“Igor picked the first piece (Cha Cha) and Anthony and I picked the last two,” Carreira offered. “It’s a very different program from last year, mostly because of the rhythm, and it’s also more demanding than the short dance we had last year.”

“As much as I loved last year’s short dance, I believe this year’s is more energetic and better suits our styles,” Ponomarenko added.

Their new free dance is to “Dance for me Wallis” and “Abdication” from the W./E. soundtrack and was choreographed by Shpilband with help from Ward and Zuerlein.

“Anthony and I both found this piece of music separately and fell in love with it, so we showed it to Igor and he loved it too,” Carreira said, regarding the first piece of music. “He (Shpilband) then found our second piece, which we all loved. I like the fact that the music is faster than last year. It’s also a very moving and powerful piece of music.”

“The movie that our music comes from has a very difficult and sad story, and we wanted to find our own idea for this piece,” explained Ponomarenko, adding that his partner’s costume resembles a butterfly. “In the beginning, the wind and a butterfly meet and its wonderful. Then a storm comes and the wind has to save the butterfly. The ending shows that something even as powerful as the wind cannot save the beautiful butterfly. I find it a very cool idea and something I can comfortably express. We’ve added wind and storm sound effects  to the music, as well.”

“It’s very emotion music, very sophisticated,” added Shpilband. “It’s not straight forward as there is a lot of different emotions and feelings. They are a very young team, and when we first started working together, it was hard for them to focus and project certain images. So we decided to come up with a story so they can understand what they present and how they need to move to this music. We also wanted to keep it simple for them to follow and express and for the audience to understand it. We liked the idea of having Anthony portray the wind and be fascinated by this little butterfly and start playing with it and then try to save it.”

In late July, the team took both new programs for a test drive at the 2017 Lake Placid Ice Dance International where they finished first in both segments for a total of 149.76.

“We’re very happy with how Lake Placid went,” said Carreira. “Our programs are still very new and we still have a lot of things to work on. The monitoring session went very well; we had good feedback from judges and technical specialists, and we are looking forward to further developing our programs.”

Both skaters agree that they learned a lot last season, as well as the beginning of this one. They feel they have gained a lot of experience from the 2016-17 Junior Grand Prix (JGP) Final where they finished a respectable fourth place before they moved on to nationals and Junior Worlds.

“Seeing how the best skaters in the world at the junior and senior levels train, warm up and compete, gave us an incredible learning experience,” said Ponomarenko. “This helped us show more maturity on the ice and gave us an insight on how to express emotion towards each other. Absorbing all this information will give us a new mindset as we enter our fourth season together.”

This season, their goals are to improve their skating skills, speed and connection with each other, and skate clean and strong programs at every competition. Long-term, they want to gain maturity in their skating as they prepare to move into the senior ranks in the future.

“We have worked on a wide range of things over the summer,” said Shpilband. “Especially on the clarity of technique, as well as the execution of the turns to ensure they are getting good levels from the technical panel. Obviously, they have different footwork from last season. This is something I try to do with all the teams.”

“Most of the growth I hope to see this season is the growth of their maturity in the expression of the music,” the coach added. “I think the sophistication of the programs of this year is a step up from previous years. It’s a lot more mature in terms of connections and interactions between them.”

The ice dancers just competed at Cup of Austria—their first JGP of the season—where they finished first. They are currently slated to compete again in two weeks at the 2017 Minsk Arena Cup in Belarus.

Although it’s still early in the season, both skaters have made it clear that they have their eyes on the 2018 Junior World podium. This time, they are shooting for the top.