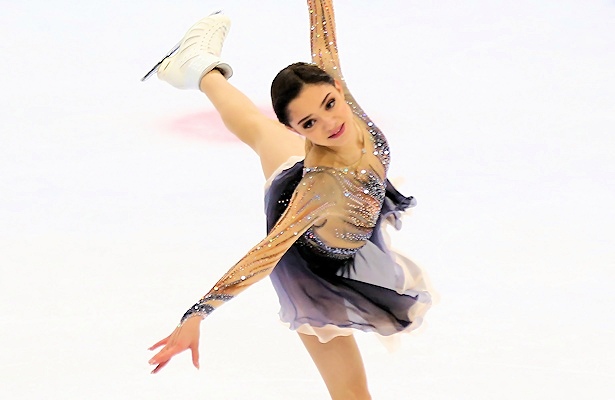 The 17-year-old reeled off her arsenal of triples and triple-triple combinations with her usual precision with the only glitch being a three turn on the landing of the triple Lutz in the free. In the short program Medvedeva scored 80.00 points, getting close to her personal best and record score of 80.85 that she achieved at the World Team Trophy last April.

However, the two-time European Champion admitted that she had competition jitters before the short program.

“I was nervous before the short, my legs were stiff,” the Muscovite said. “I felt better after the free. Before the free, I told myself that don’t have anything to lose and it worked out more or less. However, I can’t say that I was very happy that I skated better than at the (Russian Figure Skating Federation’s) test skate in Sochi, because you have to skate clean.”

Medvedeva has progressed in many aspects of her skating over the summer. Her jumps are higher, her skating skills have improved, and although she has been an emotional performer before, she seems to “live” her programs even more. She has moved all jumps except for a double Axel into the second half of the free program, and now does almost all jumps with both arms lifted above her head, which she sees as a personal challenge.

“Obviously, it is harder to have two (triple-triple) jump combinations in the second half and only one jump in the first half, but you get into it. You get used to everything, you just need to work,” she noted. I tried doing all jumps with both arms above the head and this only happened three days before I left for Bratislava.”

“A week after Sochi, I skated my program like at the test skate in practice, jumping with one hand (above the head) or without arms (above the head),” the skater continued. “Just one day I thought – why not with two arms lifted? And so I started to jump that way. It is a bit harder for me, but it is a kind of challenge for me that I accept and I will work on it.”

“We’ve worked a lot on the skating skills, but it is still not enough,” added the skater who always wants to perfect her skating and always feels she can do better – which is one of the secrets of her success.

Nepela Trophy was an important test for the skater and her team to see how the programs can be polished further.

“There will be some changes to the (long) program, but we won’t switch jumps around and put them all into the first half so it is easier for me,” Medvedeva explained. “Maybe we’ll correct some entries into the jumps, some technique, we’ll work on the spins, improve the quality of skating, find some tricks so that it is comfortable to skate and looks good. Overall, we want to raise the level.”

The short is entitled “The Flight of the Human Soul,” while the long is about “our path of life that we all go through.”

“It is hard to do the first steps, there are doubts and we are afraid of the unknown,” Medvedeva elaborated regarding the story behind the long program. “But with the help of faith, we can take that first step, because we feel support. The most important support is faith, having faith in yourself. Everybody has his own faith.”

“We have our own training system and we stick with is,” Medvedeva said. Coach Tutberidze had said at the end of the past season that her top student had worked harder than ever before, but Medvedeva stills wants to do more.

“I am planning to work even harder this season,” announced the skater who has broken 11 records in her career thus far. “If your skates are not clean, you have to work more.”

The first competition of the season has a special significance for the skater who feels all competitions are important.

“I wouldn’t say that it is the hardest event for me,” she explained. “It is a debut event with new programs, new costumes which evokes a little different feeling. The first event of the season is the biggest experience, because you are overcoming yourself. At the start of the season we are not yet fully ready physically and morally. The first competition is the first push into the season, the first step, the first performances that bring to light aspects that you still have to work on and the details you need to refine.”

The first and successful event of the season should give Medvedeva confidence. “Each new season is a beginning, new programs – and each program is a little life. It is a story that we tell and for the story to be seamless, to be read without hesitation, the words cannot miss letters and punctuation marks. Therefore, it is very important to skate without mistakes, to tell your story on the ice,” the Russian Champion concluded.

Medvedva is currently slated to compete next at the 2017 Rostelecom Cup, the first Grand Prix event of the season, later this month.