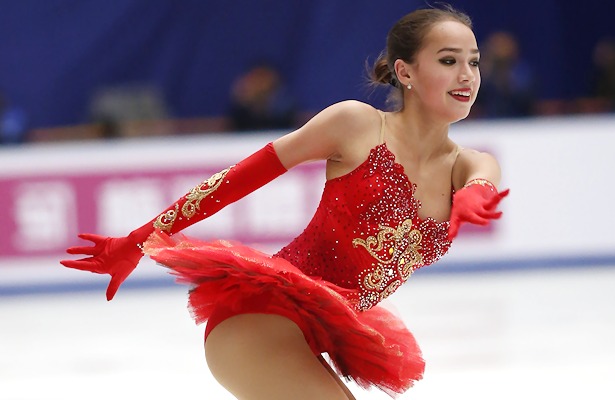 Alina Zagitova jumped from fourth place after the short program to win the ISU Audi Cup of China in her senior Grand Prix debut on Saturday in Beijing. The 15-year-old Russian squeaked past silver medalist Wakaba Higuchi of Japan to win by less than one point, 213.88 to 212.52. Russia’s Elena Radionova finished third to win the bronze despite a fourth-place finish in the long program.

“I was not so pleased with my short program,” Zagitova said, “but in the free skate, everything worked, so I was satisfied. With that, I felt a little tight in the short program. [In the long], I was able to show everything I trained. As far as my first gold in the senior Grand Prix, that means a lot to me, but I need to work and not rest on my laurels.”

“I think my experience here was not to get nervous and do what I can do and skate cleanly with no glitches,” Zagitova said. “When I look at the more grown up athletes, they are calmer. For example, (bronze medalist) Elena Radionova approaches this competition with more calmness. The goal is to skate cleanly.”

“I think my moment is very well on the ice,” said the 16-year-old. “There was a little bit missing. I performed very well after my training. In the future, I have something to improve, but today I adjusted to make my goal of making the Grand Prix Final.”

The teen admitted to feeling nervous upon entering the rink the day of the free skate.

“There’s a lot more nerves than at the Cup of Russia,” said Higuchi. “I was very happy that I can be the top Japanese lady in this competition, but I have a lot to improve in training. I feel that I am not the top one and there is a small gap to the top one. I didn’t miss a big element in this competition, but for some of the elements, they were not at the best details, so I will work on them in training.”

The 18-year-old Russian, who was fourth at the Rostelecom Cup, had a minor deduction on a triple loop-double toeloop combination and an edge call on her triple flip in her routine to “Historia de un Amor.” She otherwise scored highly on the opening triple Lutz-triple toeloop and a triple Lutz-single loop-triple Salchow.

“I’m pleased with the progress I’ve made in a short time,” Radionova said. “There’s not much time between the Grand Prix events, so I was pleased I could skate with not many errors. I am progressing step by step, but I still need to work much better. I have changed a few things in training, but I don’t think there will be any major changes.”

Strong free skates from Japanese skaters Mai Mihara and Marin Honda ranked them in fourth and fifth. Mihara, the 18-year-old Four Continents champion, was in seventh position after the short, but a third-best long (139.17 points) to “Gabriel’s Oboe” that opened with a triple Lutz-triple toeloop carried her. Mihara also finished in fourth in the 2016 Cup of China.

Honda, age 16, was the only skater in all four disciplines in Beijing who competed a week earlier at Skate Canada in Regina, where she elevated from 10th after the short to the third-best long program and a fifth-place finish. The 2016 World junior champion continued her perseverance with a triple flip-triple toeloop and triple Lutz-double toeloop-double loop combination.

“I will take it as a learning experience,” Daleman said. “There’s a lot more room to grow, but I’m very happy with how I am starting out.”

Daleman was virtually tied with Higuchi and Radionova after the short program, skating to the music of “Carmen,,” which Lori Nichol choreographed. She switched to “Gladiator Rhapsody” for the long program.

“I’ve asked for this music for about five or six years, and she kept saying when I’m ready,” Daleman said of Nichol. “So, this year she finally said I’m ready and gave me a few options. I heard this one, and I just knew this would be my lucky program, and I love it. It’s a totally different style in the free skate. It’s more elegant, but strong at the same time. It shows a completely different side of me and my skating, but it’s still so me.”

Even though she is the defending world bronze medalist, Daleman added that she and her coaches aren’t stressing that fact in the Olympic year.

“We’re taking it as a clean slate,” Daleman said. “It’s a new season, and all of the results from last season are scratched out. It’s another stepping stone to a long season, and I can’t wait to keep going.”

While Higuchi and Radionova’s Grand Prix season concluded, with the exception of the possible final, Zagitova will compete at the Internationaux de France in Grenoble on November 17, along with Mihara and former world champion Elizaveta Tuktamysheva- who placed sixth in Beijing. Daleman and ninth-place Dabin Choi of Korea will compete in Skate America the following week.