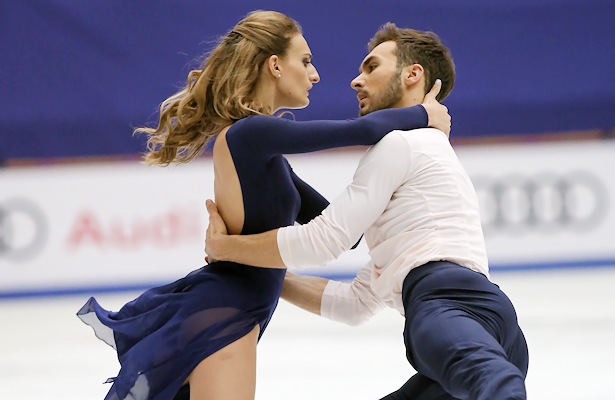 Gabriella Papadakis and Guillaume Cizeron of France broke both the Free Dance and Total record scores at the 2017 Cup of China.

Just one week after Canada’s Tessa Virtue and Scott Moir raised their own record at Skate Canada, Gabriella Papadakis and Guillaume Cizeron of France became the first ice dancers to break through the 200-point barrier, winning the ISU Grand Audi Cup of China on Saturday in Beijing.

Papadakis and Cizeron’s previous high score was 196.04, set while winning the silver medal behind Virtue Moir at last year’s world championships in Helsinki.

“It’s been a really good start to the season,” Cizeron said. “We’ve had a lot of good results, and this shows how hard we’ve trained this summer and how consistent our work is with our coaches. I think we really owe these scores to our work and the support of our team and federation.”

Papadakis and Cizeron, who train in Montreal, mesmerized the audience with their dramatic routine to Beethoven’s “Moonlight Sonata” and received no less than +2 and +3 GOEs (Grades of Execution) across the board for all elements, which were level 4 (except for level 3 circular steps).

“It’s a masterpiece of music and it really talks to everyone,” Cizeron said. “We wanted to do something really iconic. The energy we have in us at different times of the day, so we just need to find that little spot.”

Chinese ice has been favorable to Papadakis and Cizeron. After winning the Cup of China in 2014, they responded with their first world championship gold medal that spring, with both events in Shanghai.

“We have a really good memory of that world championship in Shanghai,” Cizeron said. “It’s our first time here in Beijing. We have had a really great experience in China, and we are always happy to come back. We are both going to take the energy from this into the season, and we will see what happens.

After scoring higher than any ice dance team before them, they still must discover every angle to keep pace with Virtue and Moir during a run towards the top of the podium in PyeongChang.

“The thing to work on is the technical score, and we still have room for improvement,” Papadakis said. “We will continue to work as hard as possible. Our goal is to win a medal in the Olympics.”

Americans Madison Chock and Evan Bates won the silver medal with 184.50 points and a 111.84 free dance in their first competition in six months.

“We’re so happy because this was our first event this season, and we felt that we skated really well,” Chock said. “There were a few things where we’re going to have to go back to the drawing board. We love coming to China, everyone’s so nice, and there’s so much history and culture, and we love to see it. We put out two great performances while we were here, and it’s a great stepping stone for the rest of the season.”

Chock and Bates used John Lennon’s “Imagine” in their free dance, hoping it would open people’s minds during controversial times in the United States. Their strong and inspiring routine was highlighted by dynamic level 4 lifts and twizzles.

“For this being an Olympic year, we feel that figure skating will be on a national stage, and we wanted to send a message,” Chock said. “With all of the crazy things that happen in the world, and all of the turmoil and distress, we wanted to have a message that was peaceful, so we chose ‘Imagine.'”

The two-time world medalists had the disadvantage of taking the ice directly after Papadakis and Cizeron had just put 200 points on the board, although Bates said he was unaware of that at the time.

“I think it’s great practice to skate against the best skaters in the world,” Bates said. “Gabriella and Guillaume are certainly that, and we have a ton of respect for them, for their skating and also as human beings. They’re good friends of ours.”

Just as Papadakis and Cizeron stated, technical levels are also a concern to Chock and Bates.

“We’re definitely going to have to take a look at our technical levels,” Chock said, “especially in the short dance. We got some lower levels there. We need to figure out why that happened, so we’re going to go back to the rink and work on our levels.”

Ekaterina Bobrova and Dmitri Soloviev, who took the silver medal at the Rostelecom Cup in Moscow two weeks ago, won bronze with 182.84 points and a 110.50 free dance. The team delivered a solid and passionate routine to “Oblivion” and Beethoven’s “Five Secrets.”

“We’re very pleased with our performances overall,” Soloviev said. “The free dance was a very good effort. Maybe we were holding back a little because we were skating last, and that always makes us nervous. It’s always a very warm atmosphere coning to China, each time is so nice and we’re neighbors.”

Bobrova and Soloviev are in their 18th season skating together and won a gold medal in the team event at the Sochi Olympics, despite finishing fifth in their discipline.

“We still have a lot of competitions coming up,” Bobrova said. “We will compete in Poland in a Challenger Series, then return to Shanghai. We will wait to see if we make the Grand Prix Final or not.”

Tiffani Zagorski and Jonathan Guerreiro of Russia were fourth with 164.41 points. Former world junior champions Lorraine McNamara and Quinn Carpenter of the United States placed fifth with 157.61 points and a season’s best 93.96 in the free dance.

“We were able to put out strong performances for both programs, and we are very happy about that,” Carpenter said. “It’s our first senior Grand Prix so everything (is a valuable experience). We had a couple of Challenger series leading up to this and those were in preparation for this one. We knew we didn’t have anything to lose, so we threw out our very best. We will use the experience of getting here and build off of it.”

Consistently on the podium in junior competitions, McNamara and Carpenter will need to build to climb to the heights of the top seniors.

“It’s hard to describe, but it’s definitely different because we’re on the ice with world champions,” the 18-year-old McNamara said. “They’ve been together for quite a few years, and we just want to learn from them.”

Papadakis and Cizeron and Chock and Bates will meet in two weeks at the Internationaux de France in Grenoble and perhaps one more time in the Grand Prix Final at Nagoya before a potential Olympic matchup. Zagorski and Guerreiro will compete in Skate America, while seventh-place Americans Elliana Pogrebinsky and Alex Benoit will also travel to Grenoble.

“I think the most important thing for us is to look at the scores and keep improving,” Cizeron said. “I don’t think we’ll make any big changes for next week, but we’ll stay grounded and keep with the consistent practices. It’s always a little bit of both (nerves and excitement at home). You’re nervous to perform in front of family and friends, but we’re excited because it’s home, and you’re always excited to skate at home. We’ll see how we do.”