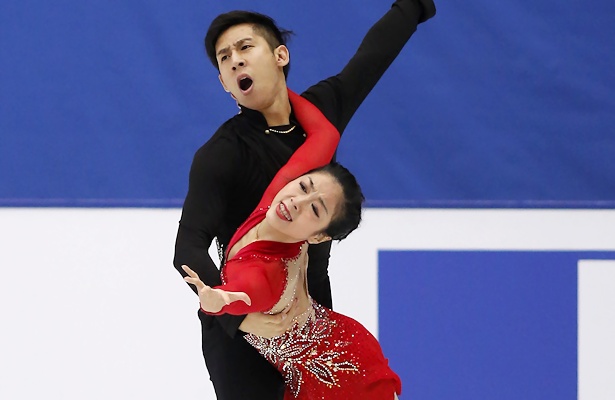 China’s Wenjing Su and Cong Han earned a new personal best for their long program at 2017 Cup of China.

It was only fitting that world champions Sui Wenjing and Han Cong were crowned victorious in pairs at the ISU Grand Prix Audi Cup of China on Saturday in Beijing, where they train. After Sui had surgery on both feet, they missed the first half of last season, while establishing themselves as the pre-eminent pairs team. They scored 150.93 points in the free skate to Giacomo Puccini’s “Turandot” for a total of 231.07, racking up the most points on their opening quad twist lift.

“I was a little nervous, but I think everything is out of my control,” Han said. “I feel very happy to perform this in front of our home crowd, but there are still things to improve to get better. This is our first win here, so we are quite happy about that. Our goal is not just to win the Cup of China, and at this time, there are still some problems with our program, so we need to fix them.”

Sui and Han were paired 10 years ago as teenagers from Harbin with no experience. They would go on to win the junior Grand Prix, two world junior championships, Four Continents championships, Skate America, and two world senior silver medals before the world title in Helsinki earlier this year. In February, they will likely be favorites to win the gold in what will be their first Olympics.

“This time we lost so many points,” Han said, “so next time we need to fix them to get to a level four for more points, in two weeks. She changed many positions and the step sequences. We need time to make this more comfortable in both programs. We need to practice the crossover jump. We will talk with our coach.”

Defending champions Yu Xiaoyu and Zhang Hao were right behind with the silver medal. Skating to the soundtrack of “Star Wars,” a throw triple loop and throw triple Salchow led to 134.17 points and a combined score of 205.54. The 33-year-old Zhang teamed with the 21-year-old Yu in the spring of 2016 and were second in last year’s Grand Prix final before placing fourth at both Four Continents and the world championships.

Yu and Zhang did lose points on their opening triple Salchow and a triple toeloop-double toeloop combination, but otherwise showed strong spins and lifts.

“We made small mistakes in both our short and long programs,” Yu said, “but I am happy we were able to finish with a strong performance in front of our home crowd in the Cup of China. Last season we did the triple-throw and double Axel, and this season we changed to the triple Salchow. This is my first time to do a triple Salchow in competition, so I feel a little nervous.”

2010 Olympic champion Zhao Hongbo coaches both the gold and silver medalists, and Sui mentioned that she and Han’s short program of “Hallelujah” was in honor of one of his classic routines with Shen Xue.

“Our coach used the program in 2003, and I was very young at that time,” the 22-year-old Sui said. “I saw that performance and it was very beautiful. I think there’s a very good chance to use this. Our coach is very proud, and he told me that if you use it, you will do better work than us. For us, it is very beautiful, and we want to impress our coach, that is very important for us.”

Canadians Kirsten Moore-Towers and Michael Marinaro used two Group 5 lasso lifts, an Axel and a reverse lasso, to claim the bronze medal with 194.32 points. Moore-Towers missed the early parts of the year with a concussion.

“We’re happy to start the season with a strong performance, but we have a lot of work to do in the coming weeks,” the 25-year-old Marinaro said.

“We fought through the elements and struggled a little with the jumps,” Guarise said, “but we were able to skate a good program. It was not easy.”

Ashley Cain and Timothy LeDuc of the United States were sixth with 154.36 points, and a third Chinese team, Zhang Mingyang and Song Bowen, were seventh (148.34) to complete the field. Cain and LeDuc train in Euless, Texas, and aspire to be the lone American representative at the Olympics in the discipline.

“Of course, we want to be on the Olympic team,” he added, “every skater dreams of that. We always keep in mind in every competition that we want to push forward to make us stronger skaters. As far as Olympic goals, we keep in mind this is only our second season together, but we’re doing everything we can to be ready to make that Olympic team.”

China and Canada will send three pairs teams to PyeongChang, along with Russia, which was not represented at the Cup of China. Italy will qualify two. Marchei and Hotarek were fourth in the Rostelecom Cup at Moscow two weeks earlier. Della Monica and Guarise will skate in the Internationaux de France in Grenoble on November 17, while Moore-Towers and Marinaro will join Yu and Zhang in Skate America.

Sui and Han are the only athletes in the entire Cup of China field who will compete one week later at the NHK Trophy in Osaka, Japan.