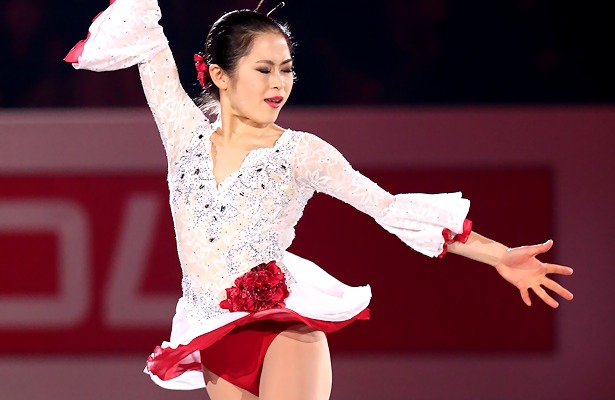 Miyahara, who had missed the last half of last season due to a pelvic injury, found this competition particularly satisfying.

The 19-year-old entered the free skate in second place behind Sakamoto, which she won, skating a methodical, nearly clean program to the music from Madame Butterfly. The highlights of the program were an intricate level four step sequence and a choreographic sequence timed perfectly to the music. The sole flaw was an under-rotated triple toe loop in her triple Lutz-triple toe combination.

Sakamoto was in first after the short program, but placed fourth in the long (139.92) and slipped to second (213.51) overall. The highlights of Sakamoto’s program were the size and power of her jumps and the way she maintained energy throughout the program, however, her transitions and skating skills have not yet reached the level of Miyahara.

The 17-year-old, who is competing in her first nationals as a senior, skated her free program to the soundtrack from the French movie Amélie. She delivered an appropriately playful, yet powerful, portrayal of Amélie Poulain. She underrotated a triple toe on the back half of a triple flip and her triple Lutz received an edge call.

Kihira, who stood in fifth after the short program, nailed a triple Axel-triple toe followed by a triple Axel in the opening of her routine to La Strada. The only flaw in her routine was a step out on a triple loop, however, the 2017 Japanese junior champion still earned the highest technical element score (79.53) of the ladies to finish second in the long (141.29) and third overall (208.03).

The 15-year-old is too young to compete internationally as a senior, but is scheduled to compete at Junior Worlds later this season.

Wakaba Higuchi finished fifth in the long and fourth overall (206.96). The 16-year-old from Tokyo delivered a solid routine to “Skyfall” with the exception of an under-rotated triple toe on the back half of a triple Lutz.

Mai Mihara was seventh in the short, but finished third in the long and fifth overall (204.67). The 18-year-old had the highest technical element score in the long program which featured six solid triple jumps and level four footwork and spins.

Miyahara and Sakamoto were named to the 2018 Olympic team with Higuchi as the first alternate and Mihara as the second alternate.