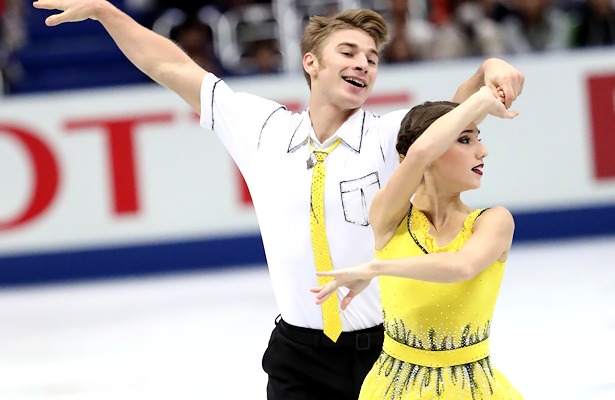 Russia has a rich tradition in pairs skating and Kristina Astakhova and Alexei Rogonov are one of the teams competing for a spot on the Olympic team for their country. They had a solid start into the season, taking a silver medal at Ondrej Nepela Trophy and then, for the first time in their career, two bronze medals in their Grand Prix events at Rostelecom Cup in Moscow, Russia, and NHK Trophy in Osaka, Japan.

“First of all, we felt like we fulfilled our duty,” Rogonov, 29, said. “We did what we planned and managed. At NHK Trophy, basically everything worked out. We showed our maximum in the situation at hand and achieved a season’s best. Hopefully our scores will continue to grow.”

Astakhova suffered from a cold in Japan, but didn’t feel like it affected her much. “My cough didn’t disturb me much and I was happy about our performance,” she commented.

However, at the end of last season she sprained her ankle and was unable to train jumps and throws until the middle of the summer. Fortunately, the injury has since healed.

The Russian pair’s free skating to La La Land is especially popular with audiences worldwide. “This music engages, even after the skate, because it still plays in your head for a while. The music is fun and very positive,” Rogonov explained. La La Land was a suggestion by choreographer Sergei Komolov. “We actually picked that music a long time ago, in April, before it was nominated for the Oscar. We watched the film and our choreographer Sergei Komolov said, ‘this is great music, let’s take it, let’s skate La La Land. We mounted it quickly. The music is really groovy and there is a lyrical part as well.”

However, Astakhova, 20, didn’t agree at first. “When Sergei suggested this music I was against it,” she revealed. “He said ‘watch the movie, you’ll like it.’ I watched the movie and I didn’t like it. I prefer more serious programs. When I just listen to the music, I don’t see the program like Sergei does and the music didn’t impress me so much.”

Only when the team from Moscow started working on the program, did Astakhova warm to it. “Now I like this program,” she said. “I like it that our programs are different from each other and we can be different, too. This is nice and interesting – to go out in the short program being rather serious and to go out into the free skating in a different mood.”

For the short program, they chose “Adagio for Strings,” “Lacrimosa” and “Carmina Burana.” At first, however, coach Artur Dmitriev, the two-time Olympic Pairs Champion, suggested keeping last season’s program in order to save time. Only in July, did the coach, choreographer and skaters decided to mount the new program.

“This was the fastest choreography that we’ve ever done,” said Rogonov. “For two nights – we skated at night – we mounted the whole short program with the footwork and the choreography. We like the music and the connection of the three pieces. “Lacrimosa,” “Adagio for Strings” and “Carmina Burana” are all interesting and I didn’t hear them in this arrangement yet. It is nice to listen to this music. We decided to do something powerful, while the long program is more playful. The short should be fast and technical.”

Rogonov is pleased with the progress the team has made this season and with the consistency they are developing.

“We are getting into shape for the highlights of the season,” he said. “We are working on the execution of the elements and on the speed. This is very important, because then the elements will look easy and you shouldn’t see the work that is behind them.”

In the past season, the team worked on a side by side triple loop, but since it is not consistent yet, they are not yet including it in their programs. Instead, they have opted for a triple toe-double toe-double toe instead, which was clean at both their Grand Prix events.

Currently, the goal is to qualify for the Olympic Games, but competition is tough inside Russia. Two spots appear to be “reserved” for European Champions Evgenia Tarasova and Vladimir Morozov, who won their two Grand Prix events, and for 2014 Olympic silver medalists Ksenia Stolbova and Fedor Klimov, who finished second in their two events. Astakhova and Rogonov and Natalia Zabiiako and Alexander Enbert are presently the top contenders for the third spot.

“There always has been, and still is, a tough competition in our pair skating,” Rogonov acknowledged. “Our job is to prepare for Russian Nationals in a way that we can show our maximum there.” Astakhova agreed: “We will fight and we set high goals for ourselves.”

The good start of the season gives the Rostelecom bronze medalists confidence. “When you make the top three in two Grand Prix events, your confidence is growing, of course,” Rogonov pointed out. “It gives you energy and for sure it has a positive effect on your overall emotional and physical condition. It is motivating.”

“You feel more confident and calmer,” Astakhova added. “If everything goes well, then it is easier to go into your next competition. If it doesn’t go too well, it drags you down a bit.”

“In practice, we do everything. We now just have to go out and do everything when needed,” Rogonov concluded. “Then you start to believe even more in yourself.”